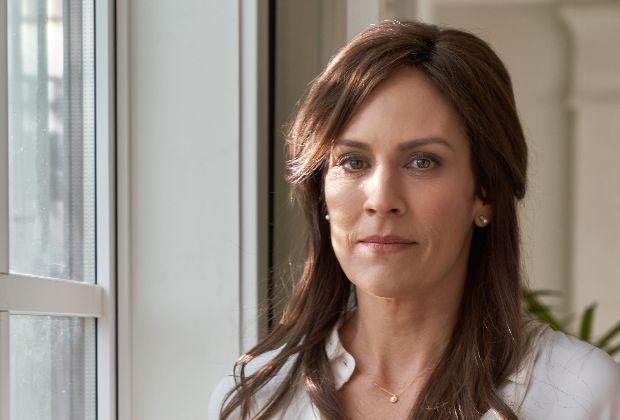 Annabeth Gish has never been a true-crime aficionado, but that changed when she decided to star as the title character in Gone Mom: The Disappearance of Jennifer Dulos, which premieres Saturday at 8/7c on Lifetime.

The small-screen film tracks Jennifer and Fotis Dulos’ whirlwind romance and marriage, the birth of their five children, his infidelities and their acrimonious divorce, which led up to her suspicious and widely reported disappearance two years ago. Fotis (played by Batwoman‘s Warren Christie), who was arrested and charged for his soon-to-be ex-wife’s murder, took his own life in January 2020. After the made-for-TV offering ends, Lifetime will air its documentary, Beyond the Headlines: The Jennifer Dulos Story.

“I stepped into this role knowing that they haven’t found her body,” Gish tells TVLine. (Her past roles include everything from Mystic Pizza to The Haunting of Hill House.) “It’s unresolved, and there are living children and family members who clearly are in pain. That aside, I followed this case when it happened. It resonated with me as a mom and as a woman, and I just really felt compelled to take this on in an attempt to honor Jennifer’s story.”

There’s also the true-crime element, which Gish says she better appreciates because of this part.

“It’s fascinating, isn’t it?” Gish asks. “I’ve never been a true-crime person. But playing this role has made me understand. It’s fascinating to try and investigate it and try and put the pieces together. I think stories like this are so deeply human because of the minor delineation between sanity and madness, or a life well-lived and a life gone wrong.”

“Some people step out of line so far that they do horrible damage,” she observes. “In the current times, we watch reported highlight reels and Instagram stories. When in reality, we all know behind closed doors and behind the façade, other things happen. Whether it’s the awareness that’s happening or whether it’s more that people are being transparent about their truth, we all need to be reminded of the dark and the light of ourselves and our humanity.” 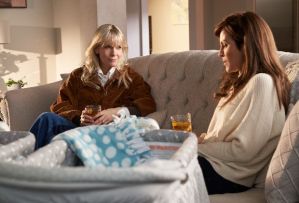 One of the bright spots in Gone Mom is the friendship Jennifer shares with Audrey (Women’s Murder Club‘s Laura Harris), who, immediately after Jennifer goes missing, explains to the police that Fotis is the only one who wished her best friend harm. Audrey is also the one who wonders if Fotis is right for Jennifer when they first start dating.

“She’s a bit of an amalgam, but Audrey is based on Carrie Luft, who is the advocate and spokesperson for the family and for the children,” Gish shares. “She was Jennifer’s best friend, and we all need those kinds of friends who question if a man is the real deal.”

Fotis starts out as a loving husband and father in Gone Mom, but over time, per the genre, devolves into a money-grubbing philanderer. Based on anecdotal evidence and court records, he’s also portrayed as verbally, emotionally and physically abusive. But exposing those sides of Fotis was a constant challenge, Gish says, particularly when addressing Jennifer’s presumed demise. 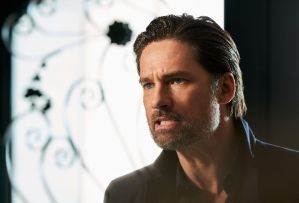 “We made a very clear decision not to be graphic with what Fotis did to her and what happened to her. It’s horrific enough,” Gish says. “It’s one thing to play this scene and this kind of a role. But at the end of the day, I could walk off the set. Knowing that gave [it] so much more gravity, that this really happened to Jennifer and it’s not just a fictional story. We do use speculation and guesswork, but our guesses are based on evidence.”

“As actors, thank goodness, we can switch it on and off, and Warren is such a lovely man and human and deeply professional,” Gish divulges. “We were deeply respectful of each other’s process. Him going to these dark places was not an easy thing to do, nor was it easy for me to be on the receiving end of it.”

“In particular, our last day of filming is the day we shot the last scene of the movie where he hits her and kills her,” she concludes. “After we finished that scene, there were a lot of big bear hugs and tears, kind of loving each other through the ugliness. It was tough. Even when we were shooting the scenes, it was triggering for people on set. Perhaps it can help people process their feelings in some way. All of us have our grief.”