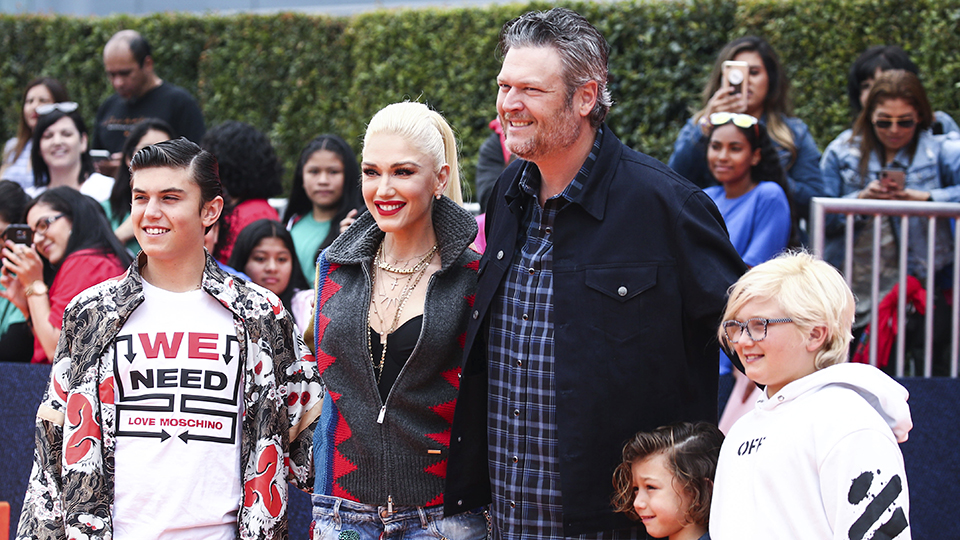 Hidden meaning. Gwen Stefani’s wedding dress at her nuptials with Blake Shelton honored her kids with her ex-husband, Gavin Rossdale.

Shelton and Stefani, who met on season 7 of The Voice in 2014, married at the country singer’s ranch in Tishomingo, Oklahoma on Saturday, July 3. The couple tied the knot at a chapel that Shelton built for the wedding. For the nuptials, Gwen wore a custom strapless lily white silk georgette Vera Wang wedding dress with a plunging neckline and hand tumbled tulle on the bottom.

“July 3rd 2021 dreams do come true !!! ❤️🙏🏻,” Stefani captioned a series of Instagram photos of her in her gown. But the dress was more than a wedding dress. In a photo posted by Stefani’s stylist, Mariel Haenn, the names “Gwen, Blake, Kingston, Zuma, Apollo” could be seen sewn into Stefani’s chapel-length veil. The dress was also embroidered with two love birds symbolizing Stefani and Shelton, as well as three baby birds for her three kids. The No Doubt singer completed her look with a custom VRAI necklace made with sustainably created diamonds.

Kingston, 15, Zuma, 12, and Apollo, 7, are Stefani’s sons with her ex-husband, Gavin Rossdale. The former couple, who married in 2003, divorced in 2016. They separated in 2015, which was around the time Shelton announced his split from his ex-wife, Miranda Lambert.

A source told Us Weekly on Monday, July 6, that Stefani made a conscious effort to include her kids both in her wedding dress and in her ceremony. “Her dad walked her down the aisle and the boys were included in the ceremony. They were recognized as being a family of five,” the insider said. “Blake and Gwen both were emotional. Blake had tears in his eyes reciting his vows to Gwen and upon seeing her in the chapel he built for their love.”

Shelton proposed to Stefani in October 2020 after six years of dating. A source told People at the time that the country crooner asked the “Hollaback Girl” singer’s children for their blessings before he popped the question to their mom. “Blake told her boys that he wanted to propose and asked their permission,” the insider said. “Her family very much approves of him. He’s an amazing partner and a great extra dad to the boys. Gwen is ecstatic. The proposal was a surprise.”

For her reception, Stefani posted an Instagram photo of herself in a much shorter dress designed by Vera Wang. The dress had a similar heart-shaped neckline with a shorter tulle skirt. She paired the look with white heeled boots and a second gown with a bow. “you need a party dress when u get to marry @blakeshelton @verawang gx,” she captioned the post.