Bollywood’s one of the promising starlet Sara Ali Khan is surely a captivating beauty. She has been winning hearts on social media courtesy of her alluring photos.

Ever since Sara has stepped into Bollywood, the gorgeous actress leaves no chance to make us go gaga over her looks. Be it flaunting her flawless beauty in the movies, or showing it during her outings in the city, the starlet always wins our hearts with her utter beauty.

Sara has undoubtedly a large and loyal fanbase throughout social media and it continues to develop by leaps and bounds, every day. Be it her charming looks, witty shayaris or intense workout videos, the actress’ social media game has always been on point. Whenever she puts across something on her social media handle, it takes the nation by a storm.

Be it a mini dress, co-ord set, or traditional wear- Sara can pull-off anything with grace, and the young star takes the cake of Bollywood fashionista. Sara is making sure to prove her worth in the tinsel town with her back to back movie deals. While the actress is acing at her work front, she is always making sure to look her best while doing so.

On Tuesday, Sara has again stunned her massive fan army with her breathtaking pictures, clicked at the beach. In the Instagram post, the 25-year-old can be seen posing candidly on the beach, donning a white shorts, white crop-top and a neon-green bralette. Sara is posing bare-feet with sprawling sea at the backdrop, and clear sky above.

She captioned the photos as, “Hakuna Matata- it means no worries”. Sara also shared the same picture on her Instagram story and wrote, “This makes me happy”, “chill o’clock”. The photographs clearly shows that Sara is a true-water baby. The post has garnered more than five lakh likes within an hour. 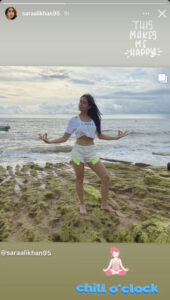 The stunning beauty had also recently turned muse for ace designer Manish Malhotra’s new collection ‘Nooraniyat’. On the professional front, Sara will be next seen in ‘Atrangi Re’, along with Akshay Kumar and Dhanush. Written by Himanshu Sharma, ‘Atrangi Re’ is a romantic drama, in which Sara will appear in dual roles for the very first time in her career.

The movie is produced under the studios T-Series, Colour Yellow Productions and Cape of Good Films. It is Dhanush’s third Hindi film. The flick is slated to hit the theatres on August 6.

Previous articleAnna Faris Reveals the Reason She & Chris Pratt Divorced 3 Years After Their Split
Next articleRatings: March Madness Dominates, Knocking The Voice and Idol to Lows