When it comes to nailing pressure moments, there’s one English netballer that everyone thinks about first. At the age of 19, she beat the buzzer to clinch Manchester Thunder’s second Superleague title and four years later, her goal secured England’s first-ever Commonwealth Games gold medal.

Helen Housby makes last-second winners look easy… many other athletes, from many different sports, will tell you that they’re not.

At crucial moments, shooting arms and legs can turn to jelly. How many times have we seen players struggle to serve out a match for a first Grand Slam title or miss a match-defining penalty?

So, what makes Housby different to those around her? When it comes down to it, she has the ability to block everything out and follow her instincts. In the early days, this ability came naturally, as she recalled during the new episode of Off The Court on Sky Sports.

“I wasn’t really thinking too much about what I was doing, I was just going out there and playing because I enjoyed it. Doing that, probably put me in a better place than overthinking and having too many voices in my head, questioning my ability.

“At that point [when I was coming through at Thunder], I was just doing it because I loved it. I didn’t really know that much about netball in general, I came to the sport pretty late and I was doing it because I really enjoyed it.”

Karen Greig and Tracey Neville, who are both back together at Manchester Thunder this season, were the ones to nurture a young Housby.

Greig spotted her at a North West talent festival when a 15-year-old Housby was representing Cumbria, and Thunder’s head coach instantly realised that she had struck gold.

“You looked at her and thought, where has she been? What kind of coaching has she had? At that point, she hadn’t really had much and I think she’d just been playing local league netball for a club,” Greig told Sky Sports.

“She’s fearless. Coming into Thunder, she didn’t even know what Thunder was and she just was fearless. She didn’t know who the players were that she was playing against.

“You quite often go up against a team and think that XYZ is playing, they can do this and they’re capable of doing that. Helen didn’t know about them. She just went out on court, did her job, and didn’t care who she came up against.”

I remember just seeing this kid on court who looked a little bit like Bambi! She was all legs and arms but one thing for me was, that shot. She had probably one of the best shooting arms in the game.

“I do think that a lot of it [being bold] was me,” Housby reflected about her nature on court.

“I hadn’t really had that much high-level coaching, that season Tracey (Neville) whipped me into shape but it was more the technique and getting my shooting right, I don’t really remember us doing a lot on pressure-shooting or that kind of thing.

“When I was that age, I was just playing under pressure and I didn’t even feel like it was pressure because I hadn’t really been anywhere near that before, and I didn’t really know how big the moment was at the time.

“I just relied on what I could do, I’d always played a lot of different sports growing up and loved it,” she added.

“I liked being an attacker, I liked to have the ball in my hands and Tracey whipped up the technique.” 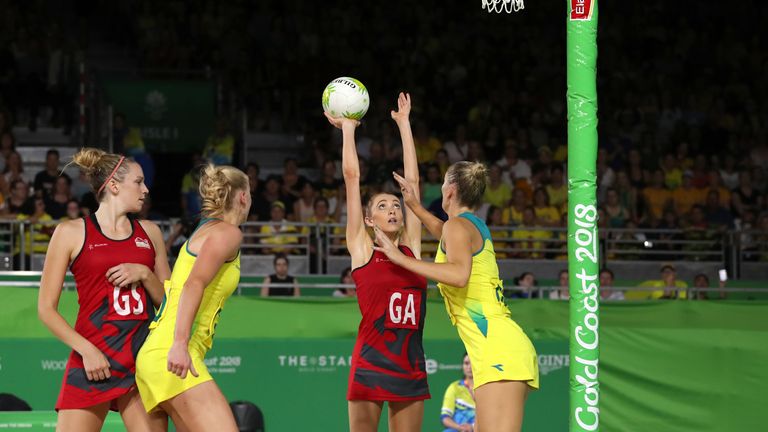 In the years after, that’s when we spoke about how to deal with big moments and that’s probably when I felt the most pressure – after the 2014 final – because I felt like lots of eyes were watching me. Before, I’d just been going under the radar a little bit, which I kind of enjoyed.

Housby’s reflections are ones that a number of young shooters within the Vitality Netball Superleague this year will read and relate to. Shooters within the pathway programmes will also be absorbing the words of someone who came through at a young age, and has now become one of the best goal attacks in the world.

Overthinking, in any aspect of our lives, can lead to us setting limitations, whereas the freedom that Housby speaks of, can help us reach the heights we’re striving for.

With experience though, comes a greater understanding of the context around us and a realisation about the pressure involved, too. Unfortunately, we can’t all stay in that instinctive world forever, but Housby is astute enough to remind herself to go ‘back to basics’ when she steps on court for England and for the NSW Swifts, who are about to start the 2021 Suncorp Super Netball season.

“As the years have gone on, it’s almost about trying to get back to playing with freedom. When you get to the top level, you go through so many sessions about psychology, but I think in those big moments, you have to rely on your instinct and your gut.

“You can train that in training sessions and put yourself in difficult situations, but I’ve found it easier to go back to the basics and just play on instinct, because that’s probably when I play better.”

Out in Australia, Housby and her Swifts start their new domestic season against the Queensland Firebirds and once again, Suncorp Super Netball will feature the two-point Super Shot.

As an incredibly effective long-range shooter anyway, Housby already had the skills to work with this innovation, and while she understands the need for development, she’s a traditionalist at heart.

“When it first came out, I didn’t enjoy the fact that it was going against traditional netball but as it progressed, I saw the merits of it from an entertainment perspective,” the 26-year-old said.

“Netball is in a place and a moment, where it needs to progress to the big stage and appeal to bigger audiences. If this [Super Shot] is one of the ways that they see this happening, then I feel like we have to go with it. We’ve got to attract eyes and people to the coverage.

“I personally think that netball is great enough as a product on its own… although I love taking the long shots and I feel Super Shot has added a cool dimension for a shooter, I did prefer orthodox netball.”

Super Shot’s introduction highlights that the issues of progression and commercialisation are constantly being spoken about in Australia, and Super Netball is regarded by many as the world’s flagship league.

England’s Vitality Netball Superleague has progressed significantly in the last few years, but it still has steps to take to move forwards and catch its Australian counterpart. Tamsin Greenway often discusses the need for the continued evolution of the Superleague and Housby agrees with her that ‘brand netball’ is needed in the UK.

I’d take it a step further, I’d commercialise the hell out of it! brand Netball, think NBA. One clothing/ball/trainer brand for all. VNSL brand camps/appearances/coach Ed/umpire Ed/events at games and I’d split all revenue. It’d be the one stop shop for all things Netball 👊🏼 https://t.co/SXuyBOKNOd

“I enjoyed your tweet,” Housby said to Greenway during Off The Court. “That’s the future of netball, especially in the UK.

“At the minute, the two leagues are very different. Today, I’ve just come back from a radio studio and I was recording an advertisement for the league and Swifts’ first home game.

“To me, that felt like a totally normal thing to do, whereas back home if you were doing something like that and you heard netball on the radio, it would almost be a one-off and something really special.

“Out here in Australia, netball is in the conversation and it gets put into the conversation alongside rugby league and the AFL. In England, I think the more that netball can be a part of the media the better; get girls out doing interviews and photoshoots, put branding on courts, make the players icons and get them on social media.

“The boys are always going to get eyes on screens and attention, but we’ve had to work for it and we’re going to keep on having to work for the attention that we get on the sport.

“I think that we need to do whatever we can to get people looking at the sport and I agree with Tamsin that it needs to be commercialised and go like the NBA, have sponsors everywhere . netball needs the investment, so why not?”

Thoughts of how netball in England and Australia can continue to develop will need to be paused for now, as Housby has a domestic season to think about. After two away trips, the NSW Swifts will be christening their brand-new home and welcoming 10,000 fans for Round Three.

With extra-time being introduced for 2021, 14 regular-season rounds, a Finals Series being played over three weeks and then a Grand Final, Housby and the Swifts have plenty on their plate.

When you then add in any potential lockdowns due to COVID-19, it’s clear that every Super Netball side has a lot to think about, but Housby is keeping it simple and knows where they want to be on August 29.

“We’re going to be lifting that trophy, you heard it here first,” she said with focused smile.

And, who’d bet against her? The Swifts have done it before, in 2021 they’ve got a settled team that’s fuelled by an early play-off exit last season, and if it comes down to a last-second winner, then they have an English expert in their ranks who can always step up and deliver.