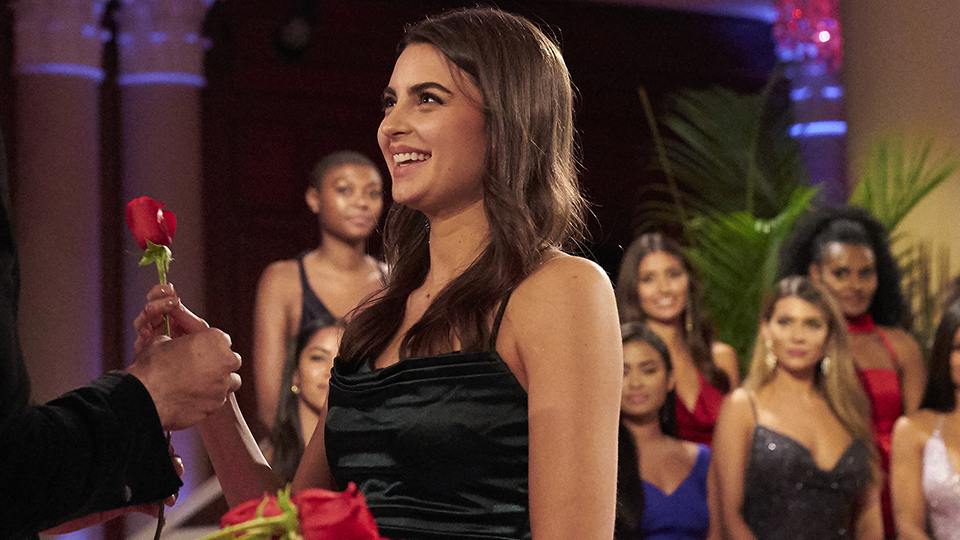 Rachael is one of 32 women who met Matt, a 29-year-old real estate agent from Raleigh, North Carolina, on the premiere of The Bachelor season 25 in January 2021. Matt is also the first Black Bachelor in the Bachelor franchise’s 15-plus-year history. Overall, he’s the third Black lead after season 13 Bachelorette Rachel Lindsay and season 16 Bachelorette Tayshia Adams.”It’s an honor,” Matt told Good Morning America in June 2020 after he was announced as the season 25 Bachelor. “I’m just going to lean into myself and how my mom raised me and hopefully when people invite me into their homes on Monday night they’re going to see that I’m not much different from them and they see that diverse love stories are beautiful.”

Why do fans think Rachael from The Bachelor is racist?

After The Bachelor season 25 premiere, TikTok user @maddyybierster, a former high school classmate of Rachael’s, posted a video in which she claimed that Rachael bullied her for dating Black men. “girlieee, remember when you bullied me in high school for liking black guys???” Maddy wrote alongside a video of Rachael and Matt. After the video went viral, Maddy shared another video of screenshots of DMs from other women who had similar experiences with Rachael when it came to dating Black men.

The scandal continued when TikTok user @feministmama posted her own video, in which she exposed Rachael for liking racist social media posts and associating herself with controversial groups.The user shared three social media screenshots that Rachael liked: one of two women in front of a Confederate flag, one of three women dressed in sombreros, ponchos and mustaches, and one of a woman in a “Make America Great Again” hat. The user also claimed that Rachael hasn’t voted in the past four general elections, sharing a screenshot of her voting history. @Feministmama also shared screenshots of Rachael‘s parents supporting Donald Trump and other Republican politicians. According to the screenshots, her father donated to WinRed, a fundraising platform that supported Trump in the 2020 Presidential Election.

In February 2021, Rachael went viral again after a 2018 photo resurfaced of her at an old south Antebellum-themed party at the University of Georgia. According to The Sun, the party was described as an “Antebellum plantation-themed ball” by Kappa Alpha, a fraternity that has been criticized as racist due to its support of Confederate General Robert E. Lee as a “spiritual leader.” The party was held during the university’s “Old South Week,” which was an event previously held on plantations and used Confederate flags for decoration. The photos showed Rachael and her friends in Antebellum-style dresses as they posed for a group photo. The Sun reported that men who attend “Old South” parties often wear costumes similar to Confederate soldiers and plantation owners. (See the photos here.)

After Rachael came under fire for her attendance at an Antebellum-themed party, Chris Harrison defended her in an interview with Rachel Lindsay (the first Black lead in the Bachelor franchise) on Extra. “We all need to have a little grace, a little understanding, a little compassion,” he said at the time. “Because I have seen some stuff online—this judge, jury, executioner thing where people are just tearing this girl’s life apart and diving into, like, her parents, her parents’ voting record…I haven’t heard Rachael speak on this yet. Until I actually hear this woman have a chance to speak, who am I to say any of this? I saw a picture of her at a sorority party five years ago and that’s it.”

Weeks after her past social media posts went viral, Rachael broke her silence in an Instagram post in February 2021. “While there have been rumors circulating, there have also been truths that have come to light that I need to address. I hear you, and I’m here to say I was wrong,” she wrote. “At one point, I didn’t recognize how offensive and racist my actions were, but that doesn’t excuse them. My age or when it happened does not excuse anything. They are not acceptable or okay in any sense. I was ignorant, but my ignorance was racist.”

She continued, “I am sorry to the communities and individuals that my actions harmed and offended. I am ashamed about my lack of education, but it is no one’s responsibility to educate me. I am learning and will continue to learn how to be antiracist, because it’s important to speak up in the moment and not after you’re called out. If you are a person who doesn’t understand the offense in question, I urge you to learn from my mistakes and encourage you to use them as a teachable moment.”

Rachael went on to suggest that she doesn’t share the same political views as her family. “As for my family, I love them and how they raised me to be my own individual. They have always encouraged me to have my own views, opinions, and beliefs,” she wrote. “As I was thinking about what I wanted to say, I couldn’t help but think about how sick people must be of reading these kinds of statements; how a person didn’t realize the trauma that their actions would inflict on other people. It must get so exhausting. I want to put my energy towards preventing people from making the same offensive mistakes that I made in the first place, and I hope I can prove this to you moving forward.”

She ended her statement: “Racial progress and unity are impossible without (white) accountability, and I deserve to be held accountable for my actions. I will never grow unless I recognize what I have done is wrong. I don’t think one apology means that I deserve your forgiveness, but rather I hope I can earn your forgiveness through my future actions.”

In her caption, Rachael noted that her apology wasn’t meant for white people. “my statement and apology is for the people of color that i have offended, if you do not identify as BIPOC then it is not your apology to accept or not. please be respectful to those who have been affected,” she wrote.

After his defense of Rachael, Harrison was slammed by Bachelor Nation members, who accused him of excusing racism. The backlash led him to apologize on Instagram for not being better informed. “To my Bachelor Nation family — I will always own a mistake when I make one, so I am here to extend a sincere apology,” he wrote. “I have this incredible platform to speak about love, and yesterday, I took a stance on topics about which I should have been better informed. While I do not speak for Rachael Kirkconnell, my intentions were simply to ask for grace in offering her an opportunity to speak on her own behalf.”

He continued, “What I now realize I have done is cause harm by wrongly speaking in a manner that perpetuates racism, and for that I am so deeply sorry. I also apologize to my friend Rachel Lindsay for not listening to her better on a topic she has first hand understanding of, and humbly thank the members of Bachelor Nation who have reached out to me to hold me accountable. I promise to do better.”

Chris Harrison steps down as The Bachelor host

Less than a week after his apology, Harrison took to his Instagram in February 2021 to announce that he was temporarily “stepping aside” as the Bachelor franchise’s host. He also confirmed that he won’t be hosting Matt’s “After the Final Rose” special.

“The historic season of The Bachelor should not be marred or overshadowed by my mistakes or diminished by my actions. To that end, I have consulted with Warner Bros. and ABC and will be stepping aside for a period of time and will not join for the After the Final Rose special,” he wrote in an Instagram post. “I am dedicated to getting educated on a more profound and productive level than ever before.”

In an interview with Entertainment Tonight in February 2021, Matt was asked about Rachael’s past social media behavior. He denied that Rachael’s social media posts were reflective of who she is. “I have not spoken to anybody since the show ended, but I would say that you have to be really careful about what you are doing on social media,” he said. “Rumors are dark and nasty and can ruin people’s lives. So I would give people the benefit of the doubt, and hopefully she will have her time to speak on that.”

He continued, “There’s a lot of stuff going around about the women that were involved in the show. I would just give them a chance to kind of have their piece, whether that is someone who was gone night one or someone who went home last night. Everyone has a story, and I would just be receptive to that.”

After Rachael and Chris Harrison’s apology, Matt took to his Instagram in February 2021 to thank Rachel Lindsay for the holding the Bachelor franchise accountable. “I am beyond grateful to have Rachel as a mentor during this season,” he wrote on his Instagram Stories. “Your advocacy of BIPOC people in the franchise is invaluable, I stand with you and the rest of the women advocating for change and accountability.” For spoilers about Matt’s Bachelor winner, click here.

After Harrison’s interview with Rachel Lindsay, many contestants from Matt’s Bachelor season took to their Instagram with a statement denouncing Rachael’s racism. “We are the women of Bachelor Season 25,” the shared statement read. “Twenty-five women who identify as BIPOC were cast on this historic season that was meant to represent change. We are deeply disappointed and want to make it clear that we denounce any defense of racism.”

The statement continued, “Any defense of racist behavior denies the lived and continued experiences of BIPOC individuals. These experiences are not to be exploited or tokenized.”

The group ended their statement by praising Lindsay for how she handled her interview: “Rachel Lindsay continues to advocate with ‘grace’ for individuals who identify as BIPOC within this franchise. Just because she is speaking the loudest, doesn’t mean she is alone. We stand with her, we hear her, and we advocate for change alongside her.”

The Bachelor airs Mondays at 8 p.m. on ABC. Here’s how to watch it for free.

Previous articleTottenham’s troubles: Jamie Carragher and Gary Neville discuss what has gone
Next articleThe Bachelor Recap: The Road to Hometowns Is Paved With Sad Tears