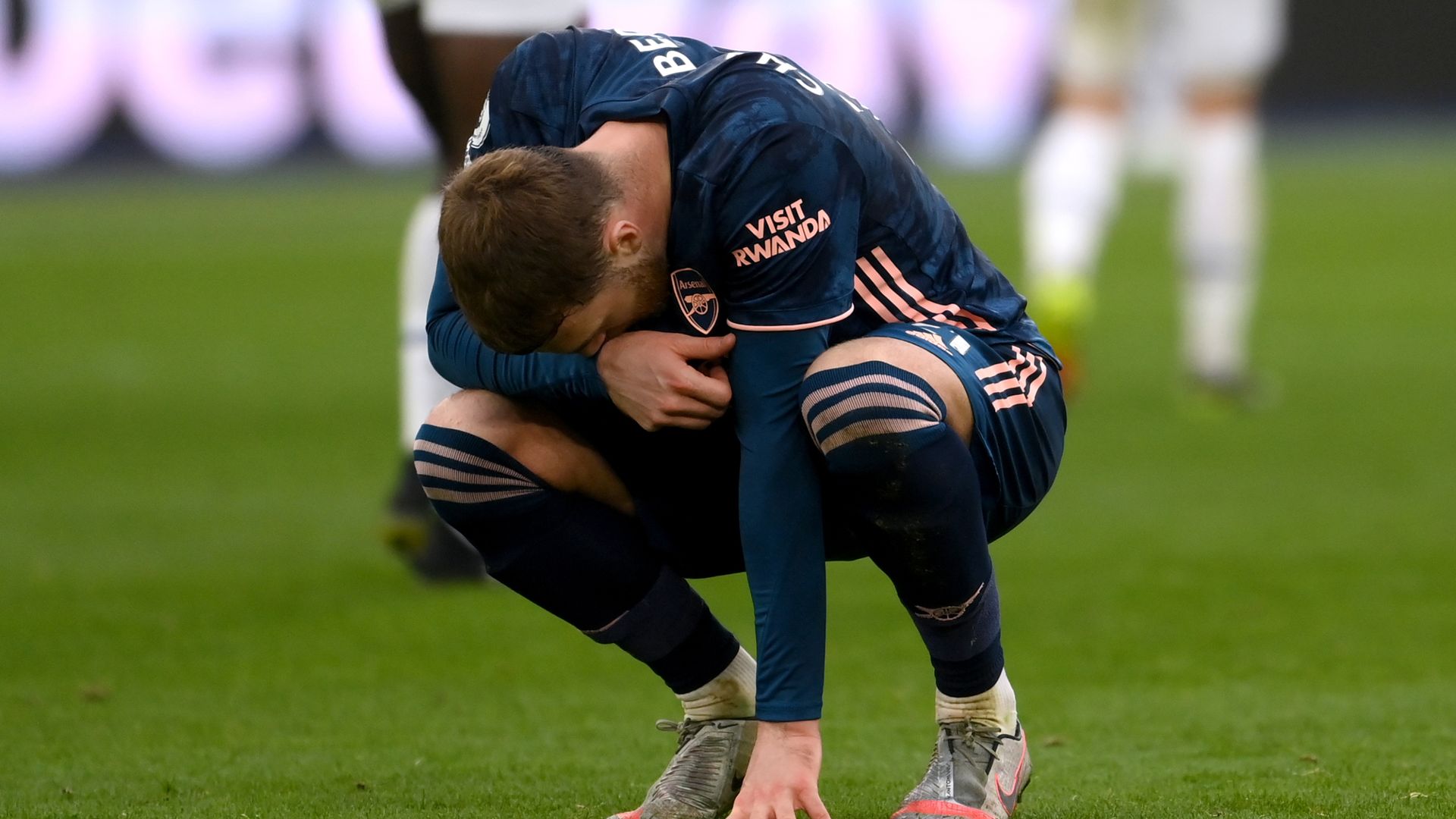 The best and worst of Arsenal in one afternoon

Even when Arsenal are this unpredictable, they leave you with the feeling that it is typical Arsenal.

After delivering one of the most abject 32 minutes of the Premier League season to find themselves 3-0 down to West Ham at the London Stadium, they contrived to fashion an unlikely comeback that will have stirred even pessimistic supporters. Expect the unexpected.

Alexandre Lacazette earned his late equaliser with a fine performance leading the line. Martin Odegaard, creator-in-chief yet again, would not have deserved to find himself on the losing side. Neither would Calum Chambers, hugely impressive on his return to the team at right-back.

But for all the endeavour shown in the second half, this was still one point when three were needed. Arsenal are ninth and the bitter taste of those first-half failings linger on the palate, not least for Mikel Arteta, a man now accustomed to his high standards not being met. “I am very disappointed because I cannot accept my team to play how they did for certain periods in the first half.”

It was the second goal that summed up everything that infuriates Arsenal supporters about their own side. This is a team that has the talent but lacks the concentration, the organisation and the discipline required to compete with the best. It was not one player caught out by Jesse Lingard’s quick free-kick, it was six of them, including some of the more senior men in the squad.

Half a dozen players had their backs turned as the West Ham man played the simple pass that set Jarrod Bowen away behind the back line. Bernd Leno should have done better but that was hardly the point. It spoke to something deeper. An Arsenal team still struggling to master the basics.

Even Lacazette acknowledged afterwards when speaking to Sky Sports that the team “did not respect the game plan of the coach”. Is there still a cultural issue holding the Gunners back, a lack of seriousness in their work that could scupper their hopes of ever restoring former glories?

Arteta thinks not. “I am not worried about the culture because we have come so far on that,” he said afterwards. “I have seen so many positive things to be content with what I am saying. The energy, the belief and the togetherness. I am worried with the levels we can show within a game.”

The comeback suggests he is right, the desire is there. But this is still a team wrestling with itself, capable of extraordinary highs and lows on the same afternoon let alone in the same week. Arteta is looking for answers but it seems the quest for consistency at Arsenal is a search that must go on.
Adam Bate

Speaking ahead of Sunday’s thrilling 3-3 draw between West Ham and Arsenal, Paul Merson was full of praise for how Jesse Lingard has resurrected his career at the London Stadium.

“I’m a big fan of him and I think he was the best signing on deadline day,” he told Sky Sports. “There were good vibes coming out of Man United that he was training well but just couldn’t get into the team. That he’s back in the England squad after just seven or eight games for West Ham tells you everything about the lad.

“He’s got a good footballing brain and the one thing you can’t mark is running off the ball. No one likes chasing anybody when they’ve not got the ball and he’s like that. He’s willing to make runs to take players away.

“He’s got to carry that on now. He’s got to do it over the next 10 games. He’s played in international tournaments before and Gareth (Southgate) likes him. He’s a team player. He plays for the team and is not selfish. Sometimes, this wrecks his assists and his goals, so he reminds me of a midfield Emile Heskey who plays for the team.”

Moments into the encounter, Martin Tyler introduced the ‘effervescent’ Lingard upon his first touch, and it was an entirely apt description. Spring is here, and the midfielder on loan from Manchester United is a man reborn under David Moyes.

Lingard scored his fifth goal against Arsenal in all competitions – the most he has netted against any opponent in his professional career.

And now he is recording the numbers to go with the selfless displays, scoring and assisting in a Premier League game for the first time since December 2018.

Moyes said this week: “Since he came in, everybody has been a bit surprised with how good his fitness is, how good his all-round game is. I can see by the way he is working he is even getting better, his physical data has got better and overall he has been very good for us.

“He has given us another string to our bow and given us more attacking options, so we are really pleased with him.”

West Ham’s Champions League charge would ultimately be dented as Arsenal showed a fighting spirit that has been nurtured by Mikel Arteta these past 15 months but in Lingard, Moyes has arguably the league’s most in-form player.

An England recall is richly deserved, and West Ham supporters will certainly hope the player comes back unscathed to play a central role in keeping the club’s European aspirations on track.
Ben Grounds

Chelsea riding high but April will be Tuchel’s toughest test

Quietly but surely, it’s been another good week for Chelsea.

Even without playing, their top-four position in the Premier League improved on Sunday as West Ham crumbled, progress to the last eight of the Champions League was secured against the team top of La Liga in midweek, and a 2-0 victory over Sheffield United made sure of their place in the last four of the FA Cup.

Things are certainly looking up at Stamford Bridge.

That said, the win over Sheffield United owed a significant debt to good fortune and, with Chelsea clearly flagging, the visitors would have been favourites to prevail had David McGoldrick headed forward rather than wide from the game’s best opportunity. On such fine margins can seasons hinge.

Thomas Tuchel quite reasonably attributed his side’s second-half wobble to fatigue, but if that was the cause then the Chelsea boss must be looking at his side’s fixture list next month with some trepidation:

In manager speak, Chelsea’s fixture list is a nice problem to have. And packed fixture lists tend to be commonplace for big clubs. But this is a season like no other and Chelsea’s date (and defeat) in last year’s FA Cup final means April is their 11th successive month of football. No matter the size of their squad, it’s a big ask.

Friday’s Champions League draw, in which they were pitted with Porto, was kind. But Sunday’s FA Cup semi-final draw, fixing up an encounter with Man City, was rather less so. Between April 10 and the end of the month, Chelsea will have to play three London derbies in the Premier League, host Porto in the Champions League, take on City in that afore-referenced semi-final, and then, subject to progression, take on either Liverpool or Real Madrid in the semi-finals of the Champions League.

And the start of May doesn’t look much easier either – another London derby, potentially another game against Liverpool or Madrid, and another encounter with City.

On a weekend when Arsenal, Chelsea and Manchester United all struggled after midweek exertions, it’s a nailed-on prediction that fixture fatigue will become a relevant but tired-out line between now and the season’s end.
Pete Gill