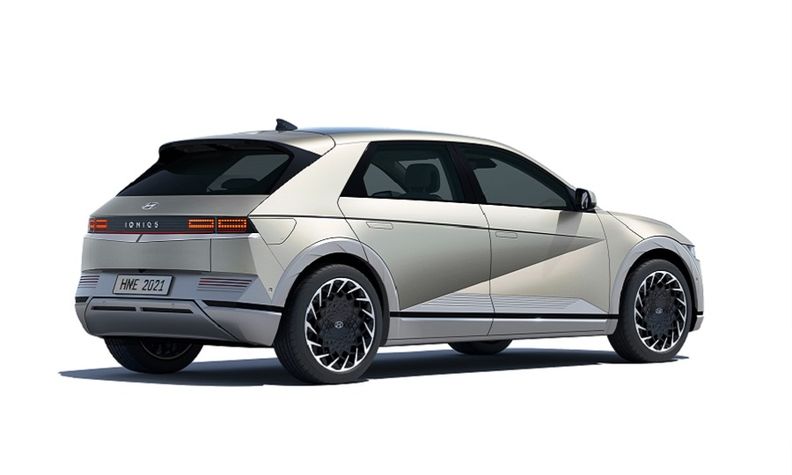 The vehicle, unveiled Tuesday in a virtual launch, is the lead-off model for a new generation of dedicated EVs that Hyundai hopes will make it a top player in the segment.

The midsize crossover is Hyundai’s answer to Tesla and a growing host of competitors flooding into the EV race, especially with offerings in the hot-selling utility vehicle market.

The Ioniq 5 will hit U.S. dealers in some regions in the first half of the year.

It stands out as much for its styling as its technology.

The Ioniq 5 gets Hyundai Motor Group’s first clamshell hood, which minimizes panel gaps while improving aerodynamics. Daytime running lamps create a new V-shape light signature, and along the side, auto-flush door handles lend some Tesla flair. The clean, angular exterior design with short overhangs and a long wheelbase are meant to telegraph the vehicle’s EV identity.

The Ioniq 5 also is available with “supersize” 20-inch wheels for a rugged, sporty look.

The 3,000-mm (118-inch) wheelbase allowed designers to open up the interior, creating a “living space” cabin with a movable center console that can slide back nearly four and a half feet.

Combined with the flat floor, the goal is a highly customizable interior.

The cockpit features a 12-inch touch infotainment screen and a hoodless 12-inch digital gauge. Also on tap is a new augmented reality head-up display, a first in a Hyundai vehicle.

Both power packs are available in either two-wheel or all-wheel-drive configurations.

The all-wheel layout gets a motor in the front and rear for combined output as high as 225 kilowatts; the two-wheel has only the rear motor, with output of either 160 kilowatts or 125 kilowatts, depending on the battery.

When it comes to range, the Ioniq 5’s large-battery, single-motor version tops the rest, providing up to 480 kilometers (298 miles) on a full charge.

That figure is derived from the European standard, the Worldwide Harmonized Light Vehicles Test Procedure, considered more optimistic than the U.S. standard set by the EPA.

The Ioniq 5 can support both 400-volt and 800-volt charging, meaning it allows for better fast charging. With a 350-kilowatt charger, the vehicle can recharge from 10 to 80 percent in 18 minutes. Five minutes of charging provides 100 kilometers (62 miles) of range, Hyundai said.

The Ioniq 5 rides on a new dedicated electric vehicle platform being rolled out by the Hyundai Motor Group for the Hyundai, Kia and Genesis brands. Called e-GMP, short for Electric-Global Modular Platform, it will underpin the manufacturer’s bid to sell 1 million EVs worldwide by 2025.

That goal will cover 23 all-electric models, including EV derivatives of models also offered with internal combustion engines. The Ioniq 5 is the first e-GMP nameplate, but later this year Kia will follow with its own e-GMP crossover, code-named CV. The Hyundai brand plans to expand its EV lineup with the Ioniq 6, an electric sedan, and the Ioniq 7, a large electric crossover.

Hyundai expects to sell 70,000 Ioniq 5 vehicles this year and 100,000 annually starting in 2022, CEO Jaehoon Chang said. About 40 percent of the sales will come from Europe and about 30 percent are expected to come from North America.