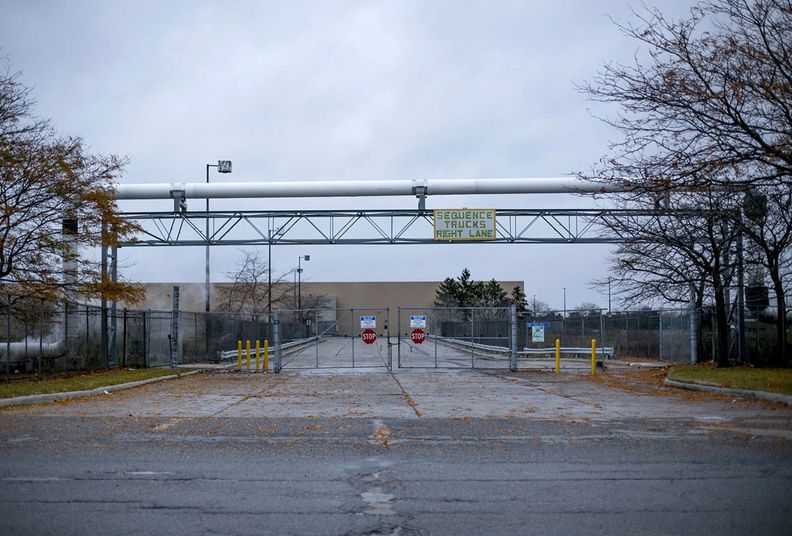 An idled plant in Detroit.

In the summer of 2018, when Tesla needed to quickly ramp up production at its Fremont, Calif., factory, the company erected a big top the size of two football fields in the parking lot. The strategy brought into stark relief the difficulty of taking a vehicle from the drawing board to the end of an assembly line.

The future of the auto industry in America will be largely determined by a parade of new electric trucks — at least four from Detroit incumbents facing off against at least six from Tesla Inc. and other upstarts. The newcomers will be building pickups for the first time, but they also will be building truck factories for the first time, which is arguably a more difficult task. Not only have Ford Motor Co., General Motors, and Stellantis NV refined the blocking and tackling of building and tooling a factory, they have scads of them sitting empty or ticking away at reduced capacity.

“A distinct advantage of the incumbent automakers is their installed capacity and their ability to pivot that to building something new,” said Gartner Inc. analyst Michael Ramsay. “It’s not only an advantage, it might be the advantage.”

In January, production at North American plants operated by Detroit’s so-called Big Three was down 21 percent from levels three years ago; collectively, Ford, GM, and Stellantis — the latter was formed from the merger of Fiat Chrysler Automobiles NV and PSA Group — cranked out 150,000 fewer vehicles in the month than they had in January 2018, according to data from Bloomberg Intelligence. Some of that decline is a sober reaction to a slower economy. However, much of the production is indefinitely idled, the result of executives ruthlessly culling sedans and other slow-selling models from their product lines.

One in 6 of the vehicles these companies made in early 2018 has been discontinued. Everything that wasn’t battery-powered, a truck, or an SUV (or all three) got a long, hard look from the C-suites in Detroit. What resulted was a parade of models that have rolled into the sunset, namely vanilla sedans such as the Ford Fusion and cramped compacts like the Chevrolet Cruze. If they weren’t killed off, they were shipped abroad (much of Buick production, for example, is in China because that’s the biggest market for the brand).

The house cleaning puts the auto industry’s old-guard in the unique position to spool up production quickly as it launches new electric models, according to Bloomberg Intelligence analyst Kevin Tynan. “It is an oversight to discount the legacy automakers that already have design, engineering, production, distribution, and after-sales scale already in place,” Tynan said. The new variables are the electric motor and the machinery linking an EV to the wheels — technology, Tynan said, that isn’t “knowable only to tiny, nascent metal-benders that want to be labeled as software companies.”

The software and battery chemistry of a contemporary EV does mandate a learning curve, but so too does the building and refining of a manufacturing site, which many of startups will be doing for the first time. The fortunes of many auto startups are now riding on slick production vehicles, often built by hand in a garage. Rolling a vehicle off a line every few minutes is an industrial ballet, where everything is carefully choreographed, from how often lug nut trays are refilled to where autonomous delivery sleds scoot by.

As Bloomberg recently reported, Rivian Automotive Inc., the electric-truck startup backed by Amazon.com Inc., is building annual capacity for about 300,000 vehicles and aims to make as many as 40,000 in its first full year — almost 800 trucks a week. While Amazon and Ford are providing financing and operational advice, “output of that magnitude across three different models is a tall order for an untested business.”

Even switching a factory from making one vehicle to another is an expensive process that typically takes months. The robots have to be recalibrated, the lift heights recalculated, and the entire supply system needs to be retooled for deliveries. “It’s not as easy as it sounds,” Ramsay said, “even though it doesn’t sound easy.”

With their expected e-truck rollouts, the Detroit companies could ramp up to make four times as many pickups annually from those inactive factories.

At stake is the future of these companies. Pickups represent a $140 billion market annually in the U.S. — that’s 1 in 4 of the industry’s revenue dollars for 1 in 5 of every vehicle sold. When electric half-tons hit the market, the segment will likely swell. Detroit has long excelled at defending its truck turf from foreign rivals, at least those powered by gasoline. In 2019, Ford, General Motors, and Fiat-Chrysler collectively controlled 94 percent of the full-size pickup market, their highest share in 16 years.

Towing the Market
Ford already has overhauled its Rouge complex in Dearborn, Mich., to start stamping out electric F-150s, part of a $700 million project. However, the company has plenty of extra capacity elsewhere before the first electric trucks hit the market in 2022. A plant in Flat Rock, Mich., for example, stopped making the Continental in December; Ford has promised the autoworkers union that it will look for something to replace it. Starting in 2025, the company has said it will build five electric models at its Oakville, Ontario, plant, which currently produces the Edge SUV, and it’s pledged to ramp up its Ohio assembly plant, where production has dropped by more than a third in three years.

Meanwhile, GM has cleared the decks at its Detroit plant and is spending $3 billion, in part to retrofit the so-called Hamtramck space for electric trucks and SUVs. The almost 40-year-old facility, recently scheduled to close, will be making the all-new GMC Hummer by the end of the year. Like its crosstown rival, GM has many assembly line options. Its Chevrolet Malibu, one of two vehicles built in its massive Kansas City, Kan. factory, won’t be renewed beyond 2022. Both the paint shop and stamping machinery at the facility (two of the most expensive parts of a plant) are less than a decade old.

Stellantis has been less aggressive in pursuing an electric pickup, though it’s promised one and has plenty of idled manufacturing power. The company recently said it will spend $1.1 billion to retool its Windsor, Ontario, plant for as-yet unnamed electric vehicles. Dedicated to minivans, production levels in Windsor are down 50 percent from three years ago.

Switching a factory is no simple task, nor is it cheap. Generally, it takes months and hundreds of millions of dollars for an automaker to retool a facility; almost everything is removed save the shell of the building itself. Still, some of the most expensive components transfer to a new architecture without much effort, namely the paint shop, massive metal stamping machines, and assembly robots.

The network of suppliers is also valuable infrastructure, a web of third-party companies nearby that can deliver parts, including seats and bumpers, every few hours. However, Ramsay at Gartner said the eventual map of EV manufacturing may largely be shaped by where the batteries are made. “They are going to go where they get cheap electricity,” he said. “And nobody is going to want to ship 3,000-pound batteries around the country.”