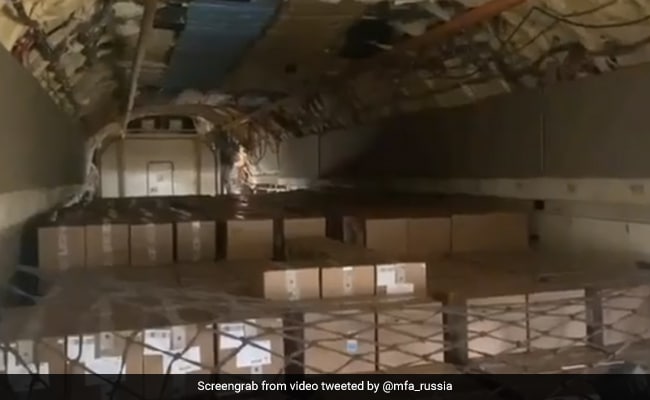 More medical supplies from the international community arrived in India on Thursday as the country battles a devastating second wave of coronavirus pandemic that has stretched its healthcare infrastructure to its limit amid surging cases.

He said the joint fight against the coronavirus pandemic is one of the most important areas of cooperation between the two countries at present.

“It also includes the forthcoming deliveries of the Sputnik V vaccine starting May 2021 and the subsequent facilitation of its production in India,” he said.

“Russia is closely watching the situation in India, which is becoming more and more alarming with unprecedented spread of the coronavirus infection. We sincerely empathise with the Indian people,” he said in a statement released by the embassy.

A consignment of 120 oxygen concentrators also arrived early this morning from the UK.

The United Arab Emirates too delivered a consignment of medical supplies that included 157 ventilators and 480 BiPAP (bi-level positive airway pressure) machines among others.

The Romanian embassy said an aircraft carrying 80 oxygen concentrators, 75 oxygen cylinders and 20 high flow oxygen therapy equipment took off in the afternoon of Wednesday from Bucharest and will arrive tonight in Delhi.

“The medical field is one of the main domains of cooperation, with special relevance in moments of crisis, as the one we are facing now,” said Romanian Ambassador to India Daniela Sezonov Tane.

“Our solidarity manifested during this unprecedented critical moment for the Indian people represents another confirmation for Romania”s engagement in strengthening and extending our relation with India – a key partner for Romania and the European Union in the Indo-Pacific region,” she added.

At a media briefing, Foreign Secretary Harsh Vardhan Shringla said three special flights from the US are expected to bring large medical supplies including oxygen generating equipment and oxygen concentrators.

Two flights are expected to arrive on Friday while the third one is set to come on May 3.

In a release, the US Agency for International Development (USAID) said it is rapidly mobilising assistance to save lives, stop the spread of COVID-19, and meet the urgent health needs of the Indian people.

“Today, the United States deployed the first of several emergency COVID-19 relief shipments to India. Arriving in New Delhi from Travis Air Force base on the world’s largest military aircraft, the shipment includes 440 oxygen cylinders and regulators, generously donated by the State of California,” it said.

“In addition, on this first flight, USAID will send 960,000 Rapid Diagnostic Tests to identify infections early to help prevent the community spread of COVID-19, and 100,000 N95 masks to protect India”s frontline healthcare heroes,” it said.

The USAID further said it has provided over $23 million in assistance since the start of the pandemic, directly reaching nearly 10 million Indians. “USAID is quickly procuring 1,000 medical oxygen concentrators that will be used in 320 primary health care facilities,” it added.

As India battles a devastating second wave of coronavirus pandemic, countries around the world have announced sending medical supplies to help it tide over the situation.

Worker "sudden" It increases the risk of breast cancer

Previous articleThe Best ‘Law & Order’ Gifts For Fans Who Have Memorized the ‘SVU’ Monologue by Heart
Next articleShahid Kapoor Joins Netflix Trilogy Based On Amish Tripathi’s Novel, Offered A Monstrous Amount Of 70-80 Crores?