Some 13 years after the release of the last outing and Indiana Jones 5 has begun shooting in the north of England. Harrison Ford, who turns 79 next month, was spotted back in his iconic costume for the Lucasfilm blockbuster that co-stars Mads Mikkelsen. The final film in the franchise’s title remains under wraps, although Steven Spielberg – who has stepped back from directing to produce – has previously confirmed the action takes place in the 1960s.

This would make a lot of sense since 2008’s Indiana Jones and the Kingdom of the Crystal Skull took place in 1957.

Set photos from the fifth movie have been popping up all over the internet, including Nazi vehicles that could imply a flashback to World War II.

After all, a stuntman was spotted wearing a mask of what appeared to be a younger Harrison Ford.

While another snap included a train with a swastika on it, which had a potentially very interesting statue pictured nearby. 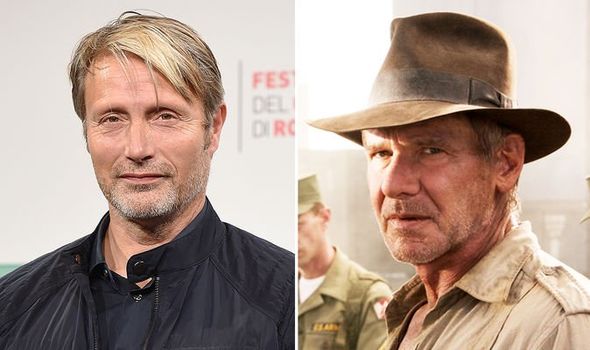 Thank you to Victor Montes for this hint
On first picture left up is in the wood construct a statue that looks like Chronos…. Story revealed? pic.twitter.com/BxMi5mJRi3

IJ Adventure Outpost, who posted one of the earliest set photos of Ford back in his Indy costume, also comment on that statue prop.

The sculpture included the head of a man with curly hair, a beard and a moustache.

According to Greek mythology, Chronos is the personification of time and also the father of Zeus. 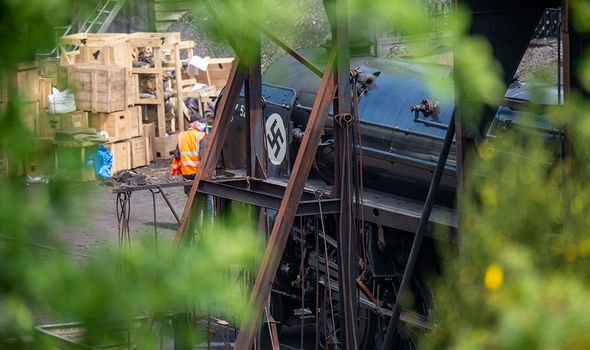 Can you see the statue in the top left – is it Chronos? (Image: SPLASH)

Exclusive Photo that we got right now!
Harrison Ford sighted on Set of Indiana Jones 5 pic.twitter.com/jVzTB25XIw

Now considering that previous Indiana Jones movies have brought in the Ark of the Covenant, the Holy Grail and even aliens, surely time travel wouldn’t be beyond the realm of possibilities for the franchise’s fifth film?

While it seems more likely that the World War II scenes are an opening prologue for Indiana Jones 5, what if it’s actually moments from a journey back to the past?

According to The Illuminerdi, Indiana Jones 5 sees Mads play a Nazi scientist who is enlisted into NASA by the US government to work on the Moon Landing initiative.

This would put the new movie around 1969, but if there’s some sort of time travelling artefact, maybe he wants to go back to the 1940s to help Hitler win the war?

Even if that sounds too outlandish, we wouldn’t be surprised if there’s something to do with controlling time involved in the plot, especially if that statue is indeed Chronos.

Heck, if the Moon Landing’s involved maybe those aliens from Kingdom of the Crystal Skull are back?

Indiana Jones 5 will be directed by Logan’s James Mangold, while John Williams returns to compose the film’s score.

Additionally, Phoebe-Waller Bridge will co-star opposite Ford in an unknown role.

Back in 2019, Express.co.uk asked John Rhy-Davies, who played Sallah in the first and third movies, if he will feature in Indiana Jones 5.

After admitting he turned down a cameo in the Kingdom of the Crystal Skull wedding scene, the actor said: “Well I keep sending signals that I’d love to be [involved in Indiana Jones 5] but I’m not on the mailing list at the moment. And I’ve got an idea that perhaps I’m not quite as politically correct enough to survive in it anymore.