When the first Indiana Jones film, The Raiders of the Lost Ark, was released on July 30, 1981, it became an instant hit. Directed and written by Steven Spielberg and Star Wars creator George Lucas, the film was a box office success, grossing more than $389 million on a meagre $20 million budget. The film did not come without its controversy, however.

Some of the fantasy film’s more haunting aspects were criticised for being too scary.

In particular, the legendary face-melting scene has gone down in history as one of the most spectacularly gruesome moments in cinema.

Another scene was described as “harrowing” during the film’s shoot.

Marion Ravenwood star Karen Allen recently spoke about working on the movie, where she revealed the snakes present in the iconic Well of Souls scene. 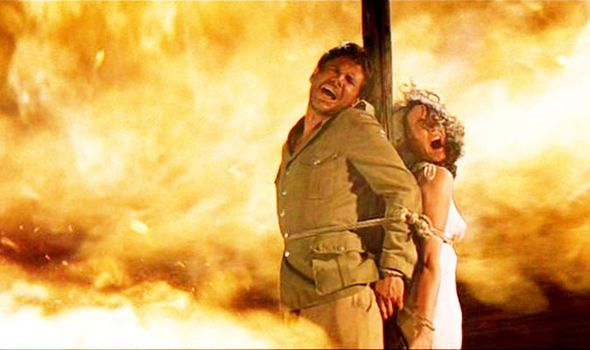 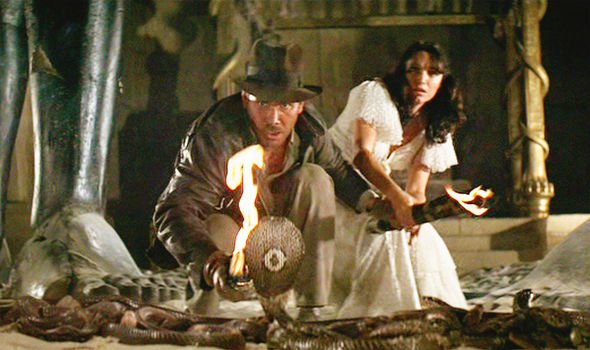 Indiana Jones: Marion and Indy were pitted against the elements (Image: GETTY)

During the scene Indiana (Harrison Ford) and Marion fall into a pit of snakes – a reptile Jones is terrified of.

These snakes, Karen said, were all real and were thrown at the stars before the cameras started rolling.

She told Press Enterprise: “Those scenes were incredible to do because they were somewhat stressful. We had 7,000 snakes all around us on the floor.”

The star added people were poised with fire extinguishers out of shot, adding: “There was fire in there. My dress, as it turned out, was very flammable, so they had to have people standing just off-screen on each side of me in case my dress went up.” 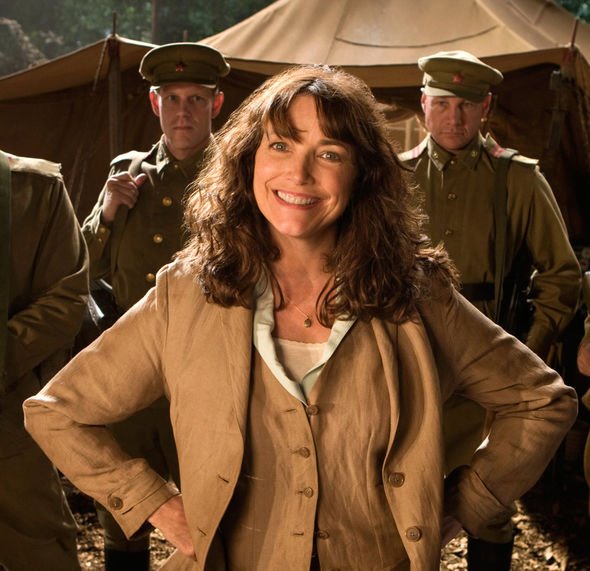 Karen went on to add: “I mean, it’s funny, it’s kind of harrowing, and Harrison and I were just having snakes kind of dumped on us, because the minute they hit the ground, they were trying to go away into cool dark places, instead of being in the light.

“And they dumped snakes on us and then Steven [Spielberg] would scream: ‘Action!’”

She went on to reveal how the horrific scenes brought her closer to her co-star.

She said: “It was kind of being thrown into really harrowing circumstances and figuring out how to get through them together.”

Karen added: “We developed a really wonderful relationship based on just kind of navigating ourselves through those situations.”

Despite how tough the scenes were to film, Karen remembers the film fondly.

Speaking about her character’s introduction, Karen said: “I had fallen in love with the character of Marion by that time.

“Just working again and again on that scene in the bar was just one of the best introductions to a character you can imagine, so I was really quite gung-ho to do the film from the beginning.”

Karen is rumoured to be returning to the upcoming fifth Indiana Jones movie.

The as-of-yet untitled film is due to conclude Indy’s journey, alongside his new wife Karen – who appeared in the fourth film, The Kingdom of the Crystal Skull.

Reports have suggested the couple will be fighting to find the fountain of youth.