Is Putin attempting to carve out ‘father of nation’ role?

In his annual address to parliament, Russian President Vladimir Putin proposed constitutional changes that could see him extend his hold on power.

Here are five things to know:

In a move that has surprised Russians and international observers, the Russian prime minister and government resigned on Wednesday as Putin proposed sweeping constitutional changes.

Dmitry Medvedev, the outgoing prime minister who had served for eight years, said government officials quit to give Putin room to carry out the changes he wants to make.

In his annual address to parliament, Putin said he wanted to put an “entire package of proposed amendments” to a referendum.

Among his proposals, he suggested:

Why has Putin done this?

Observers have been looking for clues as to how Putin might reform the political system before 2024, when his term ends.

“All last year, the question of what would happen in 2024 when Putin’s presidential term ends became the obsession of the Moscow chattering classes, and so at last we seem to have an answer,” Mark Galeotti, honorary professor at University College London’s School of Slavonic and East European Studies, told Al Jazeera.

“He is tired of the job of actually running the country, but can’t simply step down – in such a system, your status, your legacy and your security all depend on retaining some power. So, he will weaken the presidency and shift more powers to the prime minister, so they can be counterweights to each other, while creating a new ‘father of the nation’ role, probably as chairman of a revamped State Council.

“It’s not about staying in power. If he just wanted to remain president, he could easily just change the constitution to waive term limits. It’s about creating a form of political retirement that continues to provide him with security and relevance.” 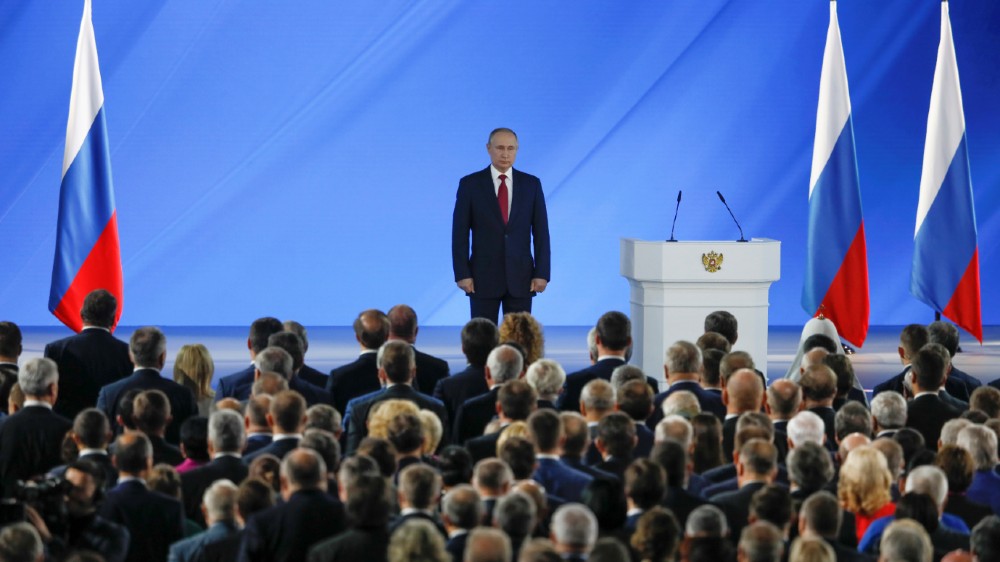 Russian President Vladimir Putin listens to the national anthem after delivering his annual address to the Federal Assembly in Moscow, Russia on January 15, 2020 [Shamil Zhumatov/Pool/Reuters]

Putin said the measures would “increase the role of parliament and parliamentary parties, powers and independence of the prime minister and all cabinet members“.

He added that Russia should remain a “strong presidential republic”.

While he promised that he would not seek a third term, something that is currently unconstitutional, analysts largely agreed that Putin is trying to extend his own influence beyond his presidential term.

He could be trying to carve out a new role for himself – one he can fill when he steps down at age 71.

It’s been a while since a major #Putin policy address has been anything other than boring. Not today. Today, Putin proposed a radical reshaping of #Russia’s political system.

“Putin wants to create the conditions and the mechanism not only to control the future president, but also help him, in a way,” Tatiana Stanovaya, a Moscow-based political expert and founder of R.Politik, a consultancy group, told Al Jazeera.

“Maybe that’s because Putin could already have found his successor and they have dealt these changes together, to ensure both their safety and room to operate: that of him in his future position, and that of the next president.”

Russian journalist and political analyst Fyodor Lukianov said it seemed as though “the transition of power” has already started.

“In 2018, after Putin’s re-election, a feeling of stagnation took over in the country. Nothing happened nor changed, the government stayed the same as in the previous term. Many thought it was already the beginning of the end – and now we’re seeing the start of the transition,” he told Al Jazeera.

“The constitutional changes proposed by Putin have an obvious design: he wants the political system to be diversified. But moderately, not changed entirely. He’s willing to create a new position for himself, putting into constitution increased powers for the head of the Russian State Council.”

Did the government quit in anger, and is there any backlash?

Outgoing PM Medvedev is a longtime Putin ally, and there seemed to be no animosity as he and the government stepped down.

Medvedev will be appointed the new deputy head of Russia’s influential Security Council.

He added: “Mishustin’s elevation to Russia’s PM is designed to get more competent leadership in Cabinet, which will have to focus on all-important domestic agenda.”

Opposition figures hit out at the Russian president.

Prominent opposition leader Alexei Navalny tweeted that Putin’s speech signalled his desire to continue calling the shots even after his presidential term ends.

Mikhail Mishustin is widely credited with modernising the federal tax service and is considered a talented technocrat.

Stanovaya said: “This is the most comfortable format for Putin to work with – putting a technocrat at the position of PM gives him space to manoeuvre.

“It looks like [Putin] wants to limit the prerogatives of the future president, so that most definitely means that he’s leaving presidency for good; he won’t stay in power. He will have to find a successor. He plans to find a loyal successor, who will be able to continue his policies. Of course there will maybe be some disagreements, but his goal is to create some leverage and mechanisms [in the system] to manage the disagreements and still have leverage.”

Lukianov said of Putin, “by appointing a PM without any political ambitions, but loyal to him, it gives him time to think”.

Russia last conducted a referendum in 1993 when it adopted the current constitution under Putin’s predecessor, Boris Yeltsin.

Putin didn’t give a date for the proposed referendum. The lower house of parliament will vote on whether to approve Mishustin as the new PM on Thursday.

The current government will continue its work until Putin hand-picks a new one to oversee the constitutional changes to Russia’s systems and structures of power.

Julian Colling contributed to this report from Moscow.

TALLAHASSEE, Fla. (AP) — Girls under the age of 18 will have to get a parent’s permission before having...
Read more

T.I. is calling individuals out to vote in2020 He states that the vote is individuals's microphone and calls...
Read more

Ben Affleck’s Mea Culpa Tour Does Not Get The Response He Was Hoping For From Jennifer Garner– Can He Pull A Brad Pitt-Style Resurgence?

Ben Affleck is currently on a mea culpa tour where he is letting ex-wife Jennifer Garner understand that he...
Read more

Analysts see ‘blue wave’ emerging in US cities ahead of election

An association of federal judges is holding an emergency meeting Tuesday to address concerns...
Read more