One of the most promising newcomer in the tinsel town Ishaan Khatter is making sure to prove his worth in the industry with his back to back movie.

While the actor is acing at his work front, he always makes sure to share snippets from his fitness sessions with his fans in an attempt to urge them to stay fit, physically and mentally.

From time to time, Ishaan keeps his fans entertained and engaged with his stunning photos from his workouts, photoshoots, projects and so on. The young star leaves no stone unturned to leave the internet smitten with his contagious workout energy.

Proving his acting prowess in ‘Beyond The Clouds’, the handsome hunk has also proved that he can even do commercial films like ‘Khaali Peeli’ and ‘Dhadak’. Ishaan has been a big hit on social media and each of his Instagram post is a thing among his fans. Keeping up with this trajectory, Ishaan has once again treated his fans with some stunning pictures on Instagram and it is winning hearts.

On Sunday, Ishaan took to the photo-sharing app and shared some monochromatic pictures from his recent photoshoot. In the clicks, the star is looking dapper as he poses candidly for the camera. He is donning a printed suit, a white vest, and has accessorised the look with a chain on his neck. In two of the pictures he is seen posing with a cigarette, however Ishaan cleared it in the caption that the cigarettes shown are herbal.

Ishaan captioned the post as, “Yin-Yang Disclaimer: I don’t smoke nor do I encourage it. The cigarettes shown are herbal.” He also shared the pictures on his IG story and wrote, “Some old Hollywood vibes for ya ” 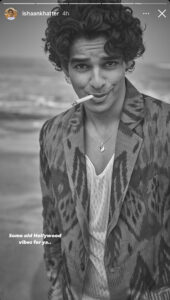 Khatter recently starred in ‘A Suitable Boy’, the Mira Nair’s adaptation of Vikram Seth’s novel of the same name, in which he was paired opposite Tabu. Ishaan will next feature alongside Katrina Kaif and Siddhant Chaturvedi in the comedy horror film ‘Phone Bhoot’, directed by Gurmeet Singh. The actor is also going to play the lead in the war film ‘Pippa’.