South Africa have backed the officials’ decision to chalk off Willie Le Roux’s potentially match-changing try in the 22-17 Test loss to the British and Irish Lions.

The Lions powered to a gritty victory in Cape Town courtesy of a try for Luke Cowan-Dickie, 14 points from Dan Biggar and a late Owen Farrell penalty.

The world champion Springboks saw possible scores for both Le Roux and Damian De Allende ruled out, but head coach Jacques Nienaber refused to offer any criticism of the officials.

The Lions had been angry with the appointment of South African Marius Jonker as Television Match Official (TMO) ahead of the contest, but it was his intervention that judged Le Roux offside, denying the Boks full-back the try.

“I thought it was tight. As soon as we saw the try was given we, as coaches, thought it was going to be extremely tight,” said Nienaber of the Le Roux decision.

“But I completely agree with and trust the decision they made. That is their profession, that is what they are good at.

“It could have gone both ways in my opinion, but I 100 per cent agree with the TMO decision.

“Sometimes those inches go for you and you score a brilliant try from a counter attack and sometimes it goes against you.”

South Africa powered into a 12-3 lead at half-time, having produced the smarter rugby in an abrasive contest to kick-start the three-Test series.

The Lions dominated the scrum, maul and aerial battle after the break, however, to stun the 2019 World Cup winners on their home turf and win the second half 19-5. 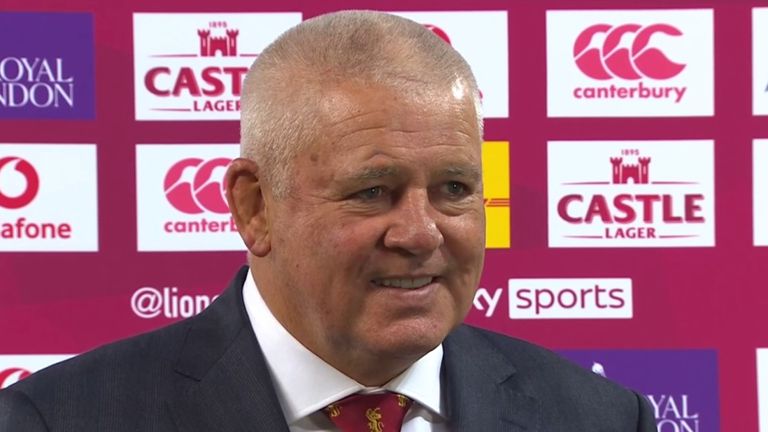 Springboks boss Nienaber admitted his side must sharpen up their aerial game and their discipline ahead of next weekend’s second encounter.

“In the second half we lost it in the air, in the kicking game,” said Nienaber.

“We got the rewards in the first half, then obviously in the second half they dominated there. And that gave them territory and broken play, and we had to scramble from that.

“At half-time, I just said keep on doing what you’re doing. Things were working for us, we were creating opportunities, playing in the right areas of the field, and the attacks we launched were forcing them to make penalties.

“I thought they attacked the breakdown a lot, and we had to sort that out.

“Then we had a big discussion about our discipline. That’s the big thing in our second half, they would start the maul, handle it, but then give away a stupid penalty. So our discipline wasn’t great in the second half.

“And the sad thing is we actually highlighted that at half-time and said we need to make a step up there, and we didn’t.

“It’s well-documented that we haven’t played a lot of rugby together and I think it would be naive to say that it doesn’t have any effect at all.

“It might affect our cohesion, but in the first half we had good cohesion, so we can’t look at that and use that as an excuse.

“The situation is definitely salvageable. We have to salvage it. We’ll have a proper review of the game and there are definitely things we can sort out.

“We can sort our mauls out, confident we will sort out the kicking game for the aerial contest.”