This morning Daniel Craig spoke with Lorraine on her morning show to discuss the upcoming film No Time To Die, which is being released on Thursday. The British star has been playing James Bond for 15 years, after debuting in 2006’s Casino Royale. Shortly after appearing in the epic film, he was given some advice from Marvel star Hugh Jackman.

Craig told Lorraine: “He’s gorgeous, and he’s… he just allowed me to sort of relax into it a little bit more.”

The two actors worked together in 2007 – a year after Casino Royale was released – on the Broadway production A Steady Rain.

Considering Jackman played the same Marvel hero, Wolverine, for 17 years, he had some insight into what Craig was getting himself into.

The Knives Out actor continued: “He’s been famous for longer than me, let’s put it that way!

James Bond: Daniel Craig spoke out about the advice he received from Hugh Jackman (Image: GETTY) 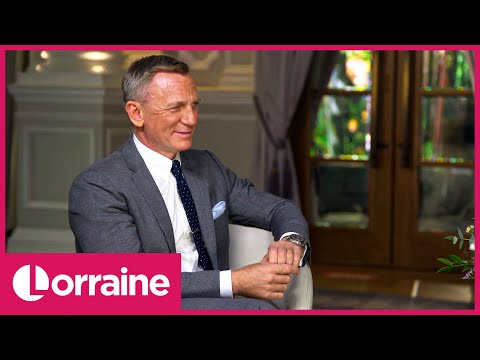 Craig continued: “Because it’s fun, it’s great. And when people like you, how nice is that?”

Going forward, the baton of James Bond will be passed on to a new actor, who will remain in the mantle for some years to come.

The 53-year-old star had similar advice for the next 007 star: “Just enjoy it.

“My coming in was complicated, just stick your head down, do your work and do the best you can. That’s what I said to myself. Fingers crossed it’ll work out for the next person… it’ll only go up.”

At the moment it seems as if there will be a big change to the ongoing Bond story for the first time.

The current Bond odds suggest a woman could take the role for the first time in history.

Nomi actor Lashana Lynch is at the top of those odds with 5/1, beating Idris Elba, Luke Evans and Henry Cavill to the punch – however, she still sits behind the likes of Regé-Jean Page and Tom Hardy.

Whoever takes over from Craig, the actor stressed that the series must progress.

Craig told Lorraine: “You’ve got to adapt. Certainly a lot of what went on in the earlier movies is sort of questionable now… different times.

“But we didn’t want to lose the essence. It’s still a Bond movie. I’ve been given free range to put my influence on it, but I’ve never forgotten that.

“We can have all key elements and things people have loved over the years, but you adapt. One of my biggest things is all the characters – especially the women – have to be brilliant and believable.”

The changes Craig suggested during this interview echo the sentiments raised by the No Time To Die director Cary Joji Fukunaga.

In a recent interview, Fukunaga spoke about the style of classic Bond films and their treatment of female characters.

He said: “Is it Thunderball or Goldfinger where, like, basically Sean Connery’s character rapes a woman?

James Bond No Time To die hits cinemas on September 30.

Lorraine airs weekdays at 9am on ITV.

Previous articleCryptocurrency Challenge .. Bitcoin Miners Buy Mining Power Plants
Next articleHamas: the next confrontation with Israel is the West Bank