The 007 actor appeared on The Graham Norton Show tonight with Bond co-stars Lashanna Lynch, Seydoux and Rami Malek.  It’s been six years since the previous instalment in the franchise, Spectre, hit cinemas with numerous delays caused by the pandemic as well as the departure of original director Danny Boyle. But Craig wass jubilant about the film they have made, although he joked he might be a little “bitter” when he finally has to walk away from the role for good. Not even teasing comments by his French co-star, who plays Bond’s girlfriend Madeleine Swann, could dampen his high-spirits.

Craig said: “At the end of Spectre I was very down on everything and I thought that was it, but I am really, really happy that I was given the opportunity to come back and do this. It wraps up a lot of the stories, and the chance to do just one more was wonderful.”

The actor was asked how hard it will be to say goodbye to a role that has defined his entire career: “It’s everything. It’s been close to 16 years of my life, and it’s been incredible to do these films. Bond films don’t get made very often so to have this opportunity has been the biggest thing in my professional career obviously, but also one of the biggest things my life, so it is very emotional. “

Craig added: “I am glad I am ending it on my terms – I am grateful to the producers for allowing me to do that – but I will miss it… I will probably be incredibly bitter when the new person takes over!”

The actor also warned fans that the action is explosive from the very beginning of the movie: “There’s a lot going on in the movie, but I don’t want to give anything away. I can say we start where Spectre left off, Madeleine and Bond have gone off into the sunset … and then as usual the s**t hits the fan!”

Léa added: “All I can say is that when it starts, they are in love and in Italy and everything is perfect.”

Some of the ensuing chaos may well have to do with the new Bond villain Safin, played by Rami Malek. The Bohemian Rhapsody Oscar-winner shared what it was like facing off with Craig on set.

Malek said: “Going toe-to-toe with him was huge, and I knew that from the very start. I just knew I had to bring my A-game and I think it worked out. We have a very special movie on our hands.”

Asked if he is intimidated by working on such a major blockbuster, he said: “Not anymore, although seeing Daniel on the 007 stage in full James Bond mode made me drop a few lines!”

Craig also described going toe-to-toe with Guardians of the Galaxy star Dave Bautista on Spectre, which resulted in the Brit breaking his knee while they filmed the fight scene on a train.

When Craig returned to set to complete the scene with his leg in a brace, he returned the favour by accidentally breaking Bautista’s nose. WATCH him tell the story below.

After all the tough talk, it was Craig’s on-screen girlfriend who put a little puncture in the macho Bond mythos. 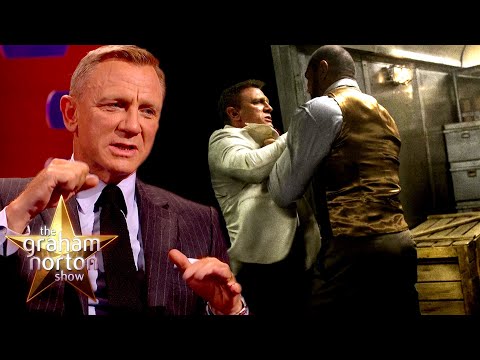 The French actress was asked if there was huge excitement back home and with her family over her role in the global blockbuster. She told Graham Norton (and Craig) with a smile: “Not at all! They don’t really know about him. I didn’t know about him. I thought, ‘Who is this guy?'”

This is perhaps a little disingenuous since Skyfall and Spectre took a combined $100million at the French box office.

It may also be dry French humour. Hopefully so, since when she was asked who would win a fight between Craig and her former Mission Impossible Ghost Protocol co-star Tom Cruise, Léa simply smiled again and said: “Tom, of course.”

Previous articleAl-Mardasi and Al-Qahtani: Al-Nasr won with an illegal goal
Next articleTurkmenistan claims it has not had a single case of Covid-19. Activists say that’s a lie