James Bond Sean Connery: Booze was needed for iconic scene ‘He was so nervous’

Gayson was starring on the London stage as Baroness Schraeder while she filmed the first two Bond movies. Through her stage work, she had already known Connery for years. The former bodybuilder and model had been trying to break through on stage and television but had struggled to land a major role, even working part time as a nanny. So his hopes were high but his expectations were low after he tried out for an exciting new British franchise. Gayson said: “In the beginning, Sean didn’t think he was going to get the part. He did the test which was terrific… We all knew that one day that Sean would make it big, big time. He just needed that break… But none of us knew what a break this was going to be.” SCROLL DOWN TO WATCH EUNICE GAYSON TALK ABOUT FILMING JAMES BOND

In one of her last interviews before her death in 2018, Gayson also explained how 1962’s Dr No didn’t just change Connery’s life, it changed the whole British film industry on the global stage.

She said: “What a break for the British film industry because it created a brand new male star. And the market opened up for British women, too, Because we were always the little wifey part, or the sister of the aunt. But the last thing we were was sexy…. Cleavage? What’s that? That’s a naughty word.

“The film world discovered British women were sexy. They’d never seen them, never been allowed to see them in that kind of role… (Bond) wasn’t only good for Sean’s masculine image and British male actors’ images, it was a breakthrough for British female actresses.”

Connery’s performance looks so effortless but the first few days on set didn’t go smoothly, including the filming of a scene that would define the whole franchise.

Gayson played Sylvia Trench, who was intended to be Bond’s ongoing girlfriend throughout the film series, until the director, Terence Young, changed his mind after From Russia With Love.

She first meets the spy in a casino. It is actually the original Bond girl who sets up one of the most famous lines in cinema history when she introduces herself as “Trench, Sylvia Trench.” Bond then replies playfully in the same fashion.

But when it was time for the cameras to roll, Connery repeatedly fluffed the line.

Gayson said: “It sounds an easy take, but it wasn’t.” 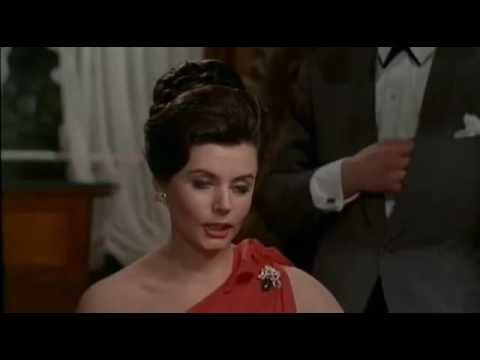 Tensions had already been building on set throughout the day and then Young decided that Gayson’s dress was the wrong colour. After a frantic search while everyone else waiting anxiously on set, nothing suitable could be found except a bright red number that was far too large. The resourceful costume department cut it up and then reassembled it with pins and pegs.

Gayson said: “It was just a piece of fabric held together with clothes pegs. By this time everybody was nervous, Sean above all, bless his heart.”

When filming resumed, everybody was on edge and Gayson later recalled how Connery stumbled repeatedly over the classic line, saying: “Sean Bond, Connery James…”

Gayson added: “In the final take, he was so easy and assured but in order to achieve that I was seconded to take him into the restaurant and have a drink or two. As he’d been on the wagon for several months before filming started, I was worried how it would affect him.”

Gayson said: “Oh ho, it did affect him but in a nice way because he came back full of the Bond image.

“He said it (the famous line) in the most wonderful way. Every woman in the world wanted to meet Bond, James Bond after that.

“The director Terence Young said ‘That’s exactly what I want, I want you to play it just like that.’

“Sean said to me, ‘The trouble is I can’t remember what I did.’”

From Russia With Love was Gayson’s final big-screen appearance. She continued to work on stage and remained associated with the Bond franchise.

Her daughter Kate cameoed in the casino scene from 1995’s Goldeneye and Gayson herself appeared on the red carpet for the 2012 Skyfall premiere.

Previous articleTaliban: We will respect women’s rights and allow them to work as long as they wear the hijab
Next articleFred braces himself for a tropical storm as he heads for the coast of the United States