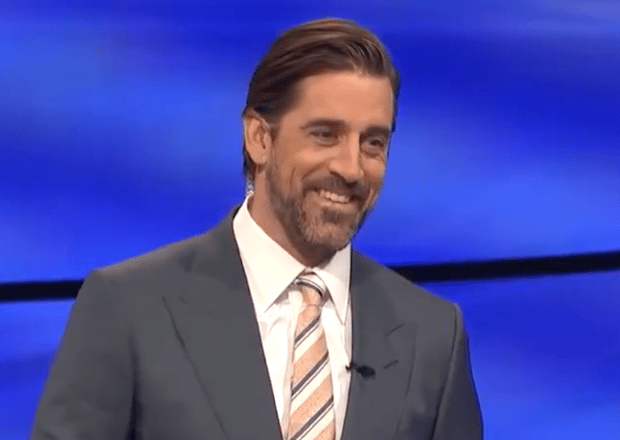 It’s Aaron Rodgers’ first day as Jeopardy! guest host, but one contestant wouldn’t let him forget about his day job.

In the Final Jeopardy round of Monday’s episode, two-day champ Scott Shewfelt used his response to tweak the Green Bay Packers quarterback about his team’s recent playoff defeat. Instead of the correct answer, Shewfelt wrote: “Who wanted to kick that field goal?” (For those non-NFL fans out there: Rodgers’ Packers faced the Tampa Bay Buccaneers in this year’s NFC Championship Game, and Packers head coach Matt LaFleur opted to kick a field goal late in the game rather than go for a touchdown, a move many questioned at the time. The Packers went on to lose the game, and the Buccaneers went on to win the Super Bowl.)

Rodgers couldn’t help but laugh at Shewfelt’s jab, adding: “That is a great question. Should be correct.” But it wasn’t, and Shewfelt’s reign as Jeopardy! champion ended in defeat… just like the Packers’ season ended.

Jeopardy! is trying out a number of guest hosts as they look for a permanent replacement for the late Alex Trebek, who passed away last year. Rodgers will host the popular quiz show for two weeks, following similar runs by former champ Ken Jennings, executive producer Mike Richards, Katie Couric and Dr. Oz.

Press PLAY below to watch the Jeopardy! moment, and hit the comments and tell us: How did Rodgers do on his first day as Jeopardy! host?

Someone had to ask, right @AaronRodgers12? pic.twitter.com/UJ9Lt4Y5cM

The Big Bull Beats The Family Man 2 In OTT Buzz, Check Out The Complete List

The Voice Recap: Night 2 of the Battles Tees Up a Couple of Head-Scratching Saves and a Particularly Painful Cut