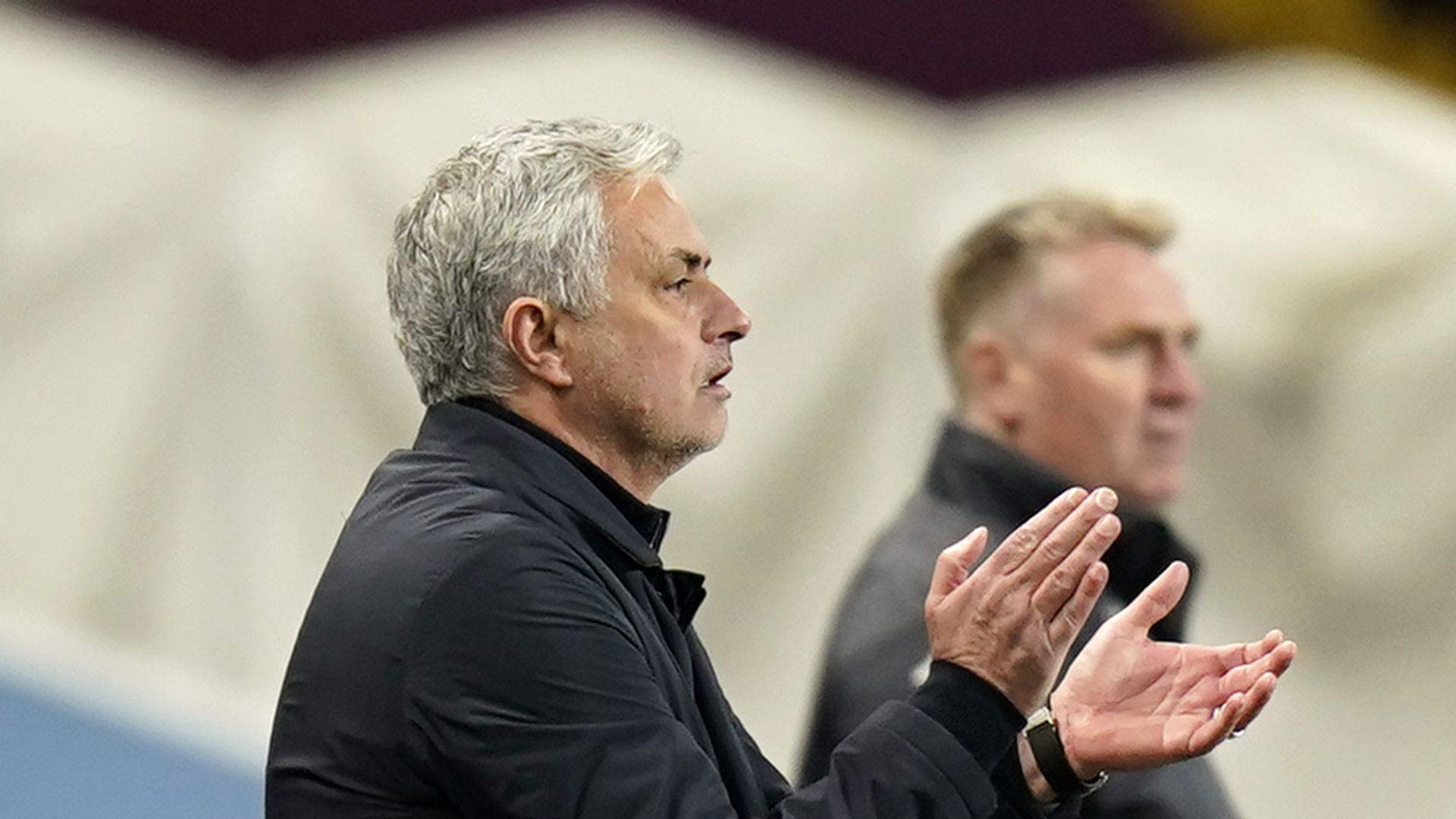 Jose Mourinho was proud of Tottenham’s win over Aston Villa but wants to be given time to help develop the mentality of his squad.

Tottenham returned to winning ways at Aston Villa after they put a difficult week behind them as they breathed new life into their bid to secure European football next season.

Mourinho’s side were under pressure after defeat to north London rivals Arsenal last weekend and a Europa League exit at the hands of Dinamo Zagreb in midweek.

Following the defeat in Zagreb, Tottenham captain Hugo Lloris questioned the togetherness in the dressing room and when asked by Sky Sports reporter Geoff Shreeves about the lack of harmony within his squad after the run of bad results, Mourinho said: “Football nowadays is not easy in relation to that. Selfishness is around. Individual interests are around. Agents are around. The connections between agents and the press are around.

“This is something that you need time to develop in a group because society and the psychological profile of younger people is not an easy one.”

Carlos Vinicius’ first Premier League goal and Harry Kane’s penalty put Spurs in a positive moment heading into the international break. Victory sees Spurs move above Everton and Liverpool into sixth, one point behind West Ham in fifth, and three behind fourth-placed Chelsea.

Mourinho said: “We had the attitude. Of course, we changed little tactical details but this was not about tactics, this was about attitude. So, total credit to the players. The players gave it everything.

“Everyone was at the limit. We saw cramps, we saw fatigue. We saw the things that are connected with a performance where you give everything. Tonight was one of these matches where we had to give everything.

“But my next challenge as their coach is for them to have this attitude every match and not just as a reaction to a bad result.

“I was not proud last Thursday. I want to be always proud of them in defeat. So, for the moment, rather than thinking about the result or the position that we are going to end or whether we are going to win or lose the final, we need to develop this spirit that we need.

“But I cannot do it alone. I have to do it with my club, with the players in my dressing room. But tonight I am really, really happy with what they did.

“Again, the challenge is that this soul, we must have it every match.”

Redknapp: Season in the balance for Spurs and Jose

“I always feel when I listen to Mourinho’s interviews, there are loaded messages in there and it feels like he is being pretty honest. He wants his players to pull together and be as one. He spoke about agents, problems and getting involved in the press.

“That is always going to happen, but it is your job as a manager to not let outside influences affect you.

“I think sometimes the perception and feeling at a club with Jose is when you win it is him and if you lose it is the players, and I don’t think that helps his cause at times. When things start to go against him, is he capable of wrestling it back?

“There is so much to play for at Tottenham still. There is no reason why they can’t get into the top four, but they’ve got to stick together. They’ve certainly got the players and we’ve spoke about Harry Kane and what he is capable of doing, single-handedly at times.

“There is still so much to play for, and it can go either way for Spurs. I have to say it is a toss of the coin with Jose at the moment at Tottenham.

“He could end up getting them into the top four, maybe even get a trophy, and it ends up being a brilliant season for them. But, if they don’t get a cup and don’t get top four, it will be a huge disappointment with that squad and a season of underachievement.

“Right now, everything is in the balance because you never know with him and how he’s going to behave or react to different situations. Here he seems quite calm and obviously losing in midweek it was different, but that’s modern-day management.”

Merson: Spurs have every chance of top-four finish

“I’ve been a manager in the lower leagues but it’s still the same, if you have a couple of bad defeats you are just sweating that you are going to win the next game, and they did that at Aston Villa.

“The last couple of games haven’t been good enough.

“But that was a typical Jose Mourinho performance. Solid at the back, not very entertaining but a very good win, and they needed it.

“I look at their fixtures and I think they are a team with every chance of getting into the top four.”