Jurgen Klopp had hailed Pep Guardiola as the best manager in the world and the Manchester City boss was not short on praise for his Liverpool counterpart. 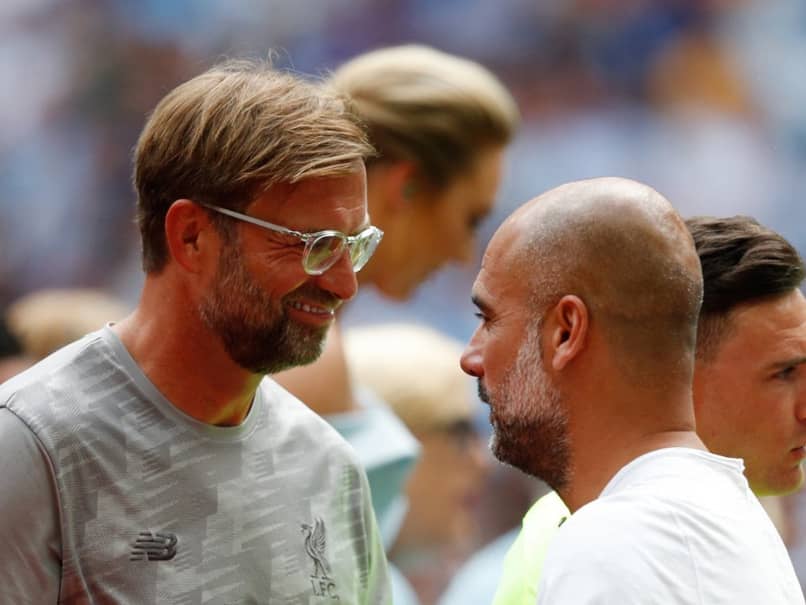 Pep Guardiola and Jurgen Klopp have been up against each other from their Bundesliga days.© AFP


Pep Guardiola has paid tribute to Liverpool boss Jurgen Klopp for inspiring him to become a better manager following Manchester City’s Premier League title success. City were crowned champions for the third time in four seasons on Tuesday when Manchester United lost to Leicester, succeeding Klopp’s Liverpool. Klopp described Guardiola as the best manager in the world at a press conference on Wednesday and the Catalan was full of compliments in return. “Jurgen, of course, was an inspiration for me,” said Guardiola.

“He made me, through his teams at Dortmund and Liverpool, a better manager. He made me think a lot about games and opponents. Thank you so much,” he said of his rival.

Guardiola revealed he and his players celebrated with pizza at an impromptu party at their training complex after defeat for second-placed United.

“It was so nice,” he said. “The unexpected parties are the nicest ones.

“We came here in our bubble. We drank a bit, we danced, we hugged a lot, we remembered how good it was. Then at 11:30 15 pizzas arrived and that was the best moment of the night.”

City’s success this season, which also includes their run to the Champions League final and a League Cup triumph, has come after Guardiola signed a new contract in November.

The Spaniard, who arrived at the club in 2016, had been in the final year of his previous deal but he said he wanted to repay the faith shown in him by chairman Khaldoon Al Mubarak.

He said: “I cannot forget my first season here, when we didn’t win anything, the behaviour of my chairman. And after the big disappointment against Lyon last season (defeat in the Champions League quarter-finals), the support I had from my chairman.

“That’s why he is part of our success and it’s dedicated to him, for supporting me, like I support my backroom staff and the players.

“Now we have two weeks ahead of us to prepare for the dream come true of playing in the final of the Champions League.”

Reigning champions Portugal begin their defence of the trophy against Hungary at Euro 2020 in Budapest on Tuesday as World Cup holders France take...

Alvaro Morata wasted the best opportunity of a dominant first half, in which Spain churned out 419 passes, the most of any team on...