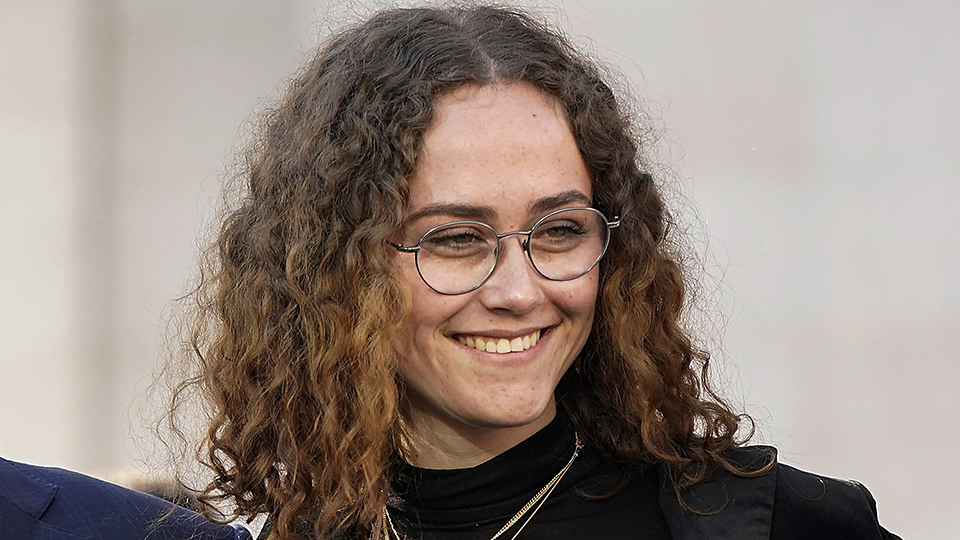 As the VPOTUS’ stepdaughter, it’s understandable why so many people want to know about Ella Emhoff‘s boyfriend, Sam Hine, and who she’s dating. Ella, for those who don’t know, is the daughter of First Gentleman Douglas Emhoff and the stepdaughter of Vice President Kamala Harris.

Ella, along with her older brother Cole, are from Doug’s marriage to ex-wife, Kerstin Emhoff. The two split in 2008 after 16 years of marriage. Though her dad grew up in Brooklyn, New York City, Ella and Cole were raised in Los Angeles. The two attended Wildwood High School in L.A., where Ella was on the basketball team and swim team. In a 2020 interview with Glamour, Ella opened up about what it was like for her dad to date Kamala, whom she now calls “momala,” after his divorce from their mom.

“I think when we met her, I was about to go into high school, so I was in an equally intense time, but for different, more angsty reasons,” she said at the time. “It felt serious when [Douglas] was just talking about her, because I could hear it in his voice. When we did meet, it all felt so natural that it wasn’t even a big deal. It felt like we had known each other forever. And I think what was important was getting to know her as a person first—a person before a politician.”

Now, it looks like the Harris-Emhoffs are just one happy family. Ahead is what we know about Ella Emhoff‘s boyfriend, Sam Hine, and her dating life while her parents are in the White House.

Who is Ella Emhoff’s boyfriend?

Ella Emhoff‘s boyfriend is Sam Hine, a senior associate editor for GQ magazine. The couple were photographed in New York City in June 2021, where they were seen holding hands as they walked down the street. For the occasion, Emhoff wore a bucket hat, a bomber jacket and yellow-and-black striped pants. Hine, for his part, wore a black western-style jacket, ripped blue jeans and sneakers. (See the photos here.)

But who is Ella Emhoff’s boyfriend exactly? Well, as we said earlier, he’s the senior associate editor at GQ magazine. He also hosts GQ’s podcast, “Corporate Lunch,” a weekly style podcast. Sam, who is seven years older than Ella, was first photographed with the Second Daughter in February 2021 when they were seen on a dinner date in New York City. According to his Instagram, Sam’s birthday is on August 26, 1993, which makes him a Virgo, according to Popsugar.

As an editor for GQ, sam has also interviewed several stars including A$AP Rocky, John Mayer and Henry Golding. “He was just so down to talk about fashion minutia and underground bootleg T-shirt brands and stuff like that,” Sam previously told Grailed about his interview with Mayer. “John nerds out about all of it as much as we do at GQ. He told me how obsessed he was with a random Instagram story where Virgil [Abloh] laid down the perfect spray paint ombre on a pair of sunglasses. He’s in so deep.”

According to Popsugar, Sam was raised in Chicago but moved to New York City to pursue a career in fashion. “I got an internship with Antonio Ciongoli when he was creative director of Eidos,” he previously told Grailed. “I got paid in clothes and spent the summer soaking up as much about how the industry works as possible.”

It’s unclear how Sam and Ella met, but it’s likely that the two connected over their shared experience in the fashion industry. While Sam is a style editor, Ella graduated from Parsons School of Design in May with a Bachelor of Fine Arts degree in textile design, with a specialization in knitwear. Ella, who went viral for her Miu Miu coat at the 2021 Presidential Inauguration, is also signed to IMG Models.