Kriti Sanon showers birthday love on Sonakshi Sinha: ‘Stay the rooted person that u are’ Sonakshi Sinha has won several hearts with her flawless performances on the silver screen, and is one of the most sought after actress in Bollywood who has proved her mettle in the industry.

The actress has won hearts with her versatility, stunning looks and impeccable acting prowess. Sonakshi is also an avid social media user and is very popular on Instagram for her relatable lifestyle and chic style.

On Wednesday, the diva is celebrating her 34th birthday and the social media is flooded with heartwarming wishes for her. Born to actors Shatrughan Sinha and Poonam Sinha, Sonakshi made her acting debut with ‘Dabangg’ in 2010, which won her the ‘Filmfare Award for Best Female Debut’.

Now on the occasion of her birthday, Kriti Sanon took to her Instagram story and penned a sweet wish for Sonakshi. Sharing a gorgeous picture of the birthday girl, Kriti wrote, “Happy Birthday Sona!! Wish you happiness, love and all that your heart desires! Stay the amazing, real and rooted person that u are!”

Take a look at Kriti’s birthday wish for Sonakshi here- 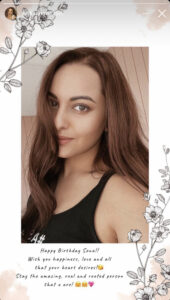 On the work front, Sonakshi was last seen in ‘Dabangg 3’, along with Salman Khan. She will be next seen in ‘Bhuj: The Pride of India’. The film also stars Ajay Devgn, Sanjay Dutt, Nora Fatehi and Sharad Kelkar in the lead roles. She will also star in yet-to-be tilted Amazon Prime Video web-series. Sonakshi will be seen playing the role of a police officer in the show.

Tomorrow at 12 o’clock, Kartik will come for the announcement related to the upcoming film.

Huma Qureshi featured on the cover of Cosmopolitan Magazine.