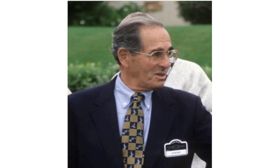 Levine prolifically wined and dined the trade press, but he also took what he considered any disrespect for the brand personally.

Editor’s note: The author covered Mercedes-Benz as an Automotive News reporter in New York starting in 1988 and worked for the company from 2003 to 2006.

Leo Levine, the former head of public relations for Mercedes-Benz of North America who epitomized and zealously defended the brand in the U.S. for decades, died Saturday at age 90.

His death followed a struggle with Parkinson’s disease, said his stepdaughter, Nancy Fournier.

Long before he became a spokesman for the brand, he had pushed its cars to their limits.

Levine got a taste for race car driving in Europe, where he served in the Army during the Korean War era. After his discharge, he raced for Porsche in Europe and South America in the iconic 356 Speedster.

He also drove and wrote about driving Mercedes-Benzes, including the 1954 W196 grand prix Formula One race car that had been driven by Juan Manuel Fangio and the legendary gull-winged 300 SLRs.

He was a journalist and a book author, an automotive historian with an encyclopedic memory. He wrote Ford: The Dust and the Glory, A Racing History, Volume 1 (1901-1967), which was published in 1968. Decades later came the second volume, covering 1968 to 2000.

Within the industry, he may be best remembered for his 20 years or so as head of public relations in the 1970s and ’80s for what was then Mercedes-Benz North America, now Mercedes-Benz USA.

While Mercedes-Benz certainly is considered a luxury brand in Europe, it’s also a common brand for delivery trucks, taxicabs and stripped-down passenger vehicles without the luxury features of U.S. models. Mercedes-Benz North America cultivated an image as the creme de la creme, and Levine was responsible for much of that.

Levine prolifically wined and dined the trade press, but he also took what he considered any disrespect for the brand personally. (And if he didn’t take it personally, he certainly acted as if he did.)

That could include displays of temper. He might ban a reporter from Mercedes-Benz press events for a while for getting a title wrong, such as vice president instead of executive vice president. Years after he retired, he quietly seethed when a journalist showed up to the Mercedes-Benz holiday luncheon at The Four Seasons restaurant in Manhattan “without the common decency to put on a necktie.”

But he was just as tough, maybe tougher, on his own team. “His mantra was, ‘Never lie,’ ” automotive PR veteran Mike Geylin recalled in a phone interview.

Levine also constantly, and only a little more politely, reminded Mercedes-Benz executives to keep their mouths shut when they didn’t know, or knew and couldn’t share, the answer to a journalist’s question.

“ ’No is an OK answer,’ words to that effect,” said Geylin, president of Kermish-Geylin Public Relations. He worked for Levine from 1978 to 1983.

Contributions can be made to the Parkinson’s Foundation.