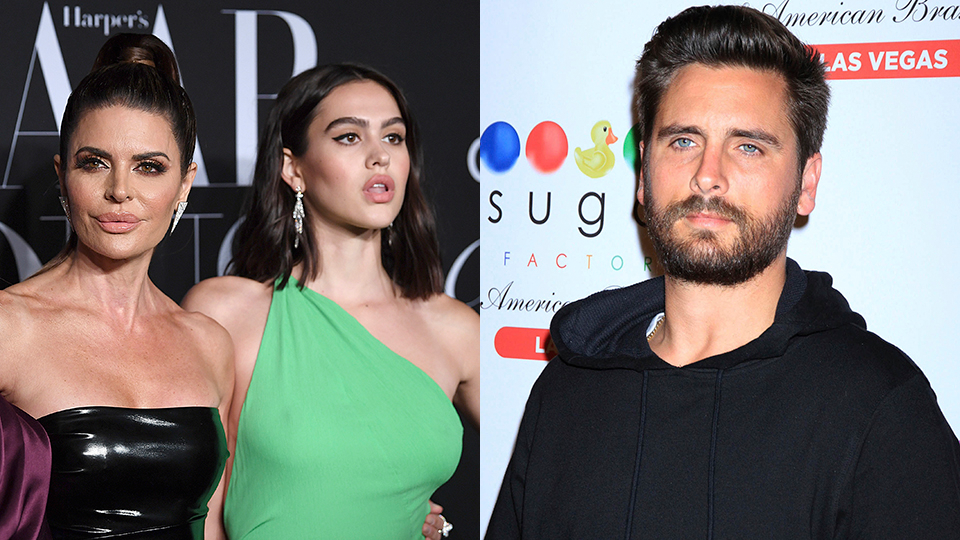 Meet the Hamlins. Lisa Rinna reacted to Amelia Hamlin and Scott Disick dating, and it looks like she’s already welcomed him into their family.

The Real Housewife of Beverly Hills took to her Instagram Story on Tuesday, April 6, to post a photo of Scott and Amelia walking hand in hand on a beach in Miami. “Welp we both seem to share a love of bucket hats,” Rinna wrote in the caption, trolling Scott for his accessory choice. The photo showed Scott wearing the bucket hat with a pair of striped shorts and a matching button-down shirt. She followed the Instagram Story with a side-by-side photo of her next to Scott wearing a similar bucket hat.

Rinna’s comment comes five months after Scott and Amelia confirmed their relationship. The two were photographed at a beach near the Rosewood Miramar Beach Hotel in Montecito, California, in November 2020. “They took a walk and enjoyed the incredible weather,” a source told E! News of Scott and Amelia’s date. “Scott pulled Amelia in close and put his arm around her. Then they had lunch by the beach and were chatting and laughing. They enjoyed the afternoon and sat up on a balcony enjoying the view.”

Though it seems like Scott and Rinna have a good relationship now, the Bravo star and her husband, Harry Hamlin, weren’t always accepting of the Keeping Up With the Kardashians star. An insider told E! News on November 17, that Rinna and Hamlin “believed” at the time that their 19-year-old daughter’s relationship with Scott is “just a phase” and nothing more. The source also noted that Lisa and Harry were “sad” to see Amelia break up with her ex-boyfriend and move on with Scott. “Harry and Lisa were sad to see Amelia and Mercer Wiederhorn split because they loved Mercer,” the source said. “He was like family, but they understand.”

E! News’ source also revealed in November 2020 that the couple had dinner at Taverna Tony in the Malibu Country Mart after their day at the beach. The insider also claimed at the time that Amelia and Scott’s relationship is far from serious. “Scott’s having a good time,” the insider said. “He’s getting to know Amelia and enjoying her company. They are spending a lot of time together but it’s nothing serious. He’s having fun with it.”

Twitter users, on the other hand, have criticized Scott for dating another teenager after his breakup with Sofia Richie. Sofia was also 19 at the time she dated Scott, who is 15 years older than her. As for Amelia, Scott is almost 17 years older than the model. One recent Twitter user wrote, “good morning scott disick is trending AGAIN for dating a girl who cannot legally consume alcoholic beverages AGAIN.”

Previous articleShweta Tiwari Received Rs 5 Lakhs As Her First Salary & She Was In Disbelief Like Most Of Us RN!
Next articleBirmingham City Women: PFA supports players over complaints to club board |