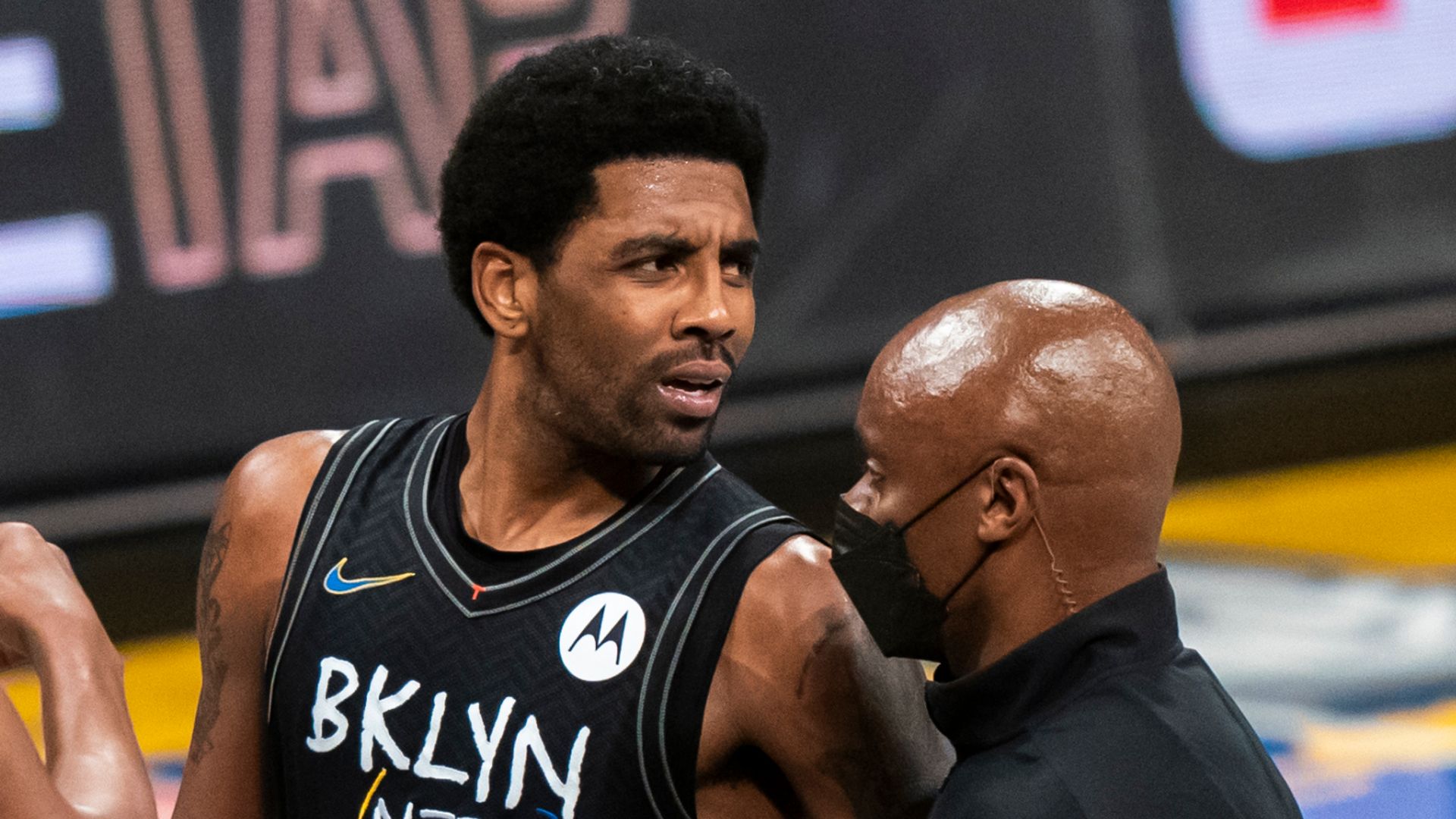 The short-handed Los Angeles Lakers blew away the star-studded Brooklyn Nets following the ejection of Kyrie Irving and Dennis Schroder, while the Utah Jazz became the first team to hit the 40-win mark this season.

Missing five rotational players and losing another mid-game, the energetic Lakers used ball pressure, sticky defense and good perimeter shooting to run past the Brooklyn Nets 126-101 on the road, corralling one steal posting four blocks and forcing 19 Brooklyn turnovers while converting those into 25 points.

In his second game back from a hamstring injury, Kevin Durant led the Nets with 22 points, seven rebounds and five assists in 24 minutes. LaMarcus Aldridge added 12 points.

Point guard Dennis Schroder carried the short-handed Lakers early, scoring all 19 points in the first half. Andre Drummond took over in the second half with a double-double of 20 points and 11 rebounds

While Schroder had it going early, Andre Drummond took over in the second half, finishing with a double-double of 20 points and 11 rebounds. Ben McLemore had 17 points, Markieff Morris added 14, Kentavious Caldwell-Pope contributed 14 points and five assists, Talen Horton-Tucker had 14 points and 11 assists and Montrezl Harrell totaled 10 points and eight rebounds.

Having jumped out to an 18-7 lead in the first quarter, the LeBron James and Anthony Davies-less Lakers were reeled in during the second courtesy of Kyrie Irving’s 18 first-half points. But still Los Angeles managed to enter the break up 61-58.

With 9:41 left in the third quarter and the Lakers up four points, the game produced some fireworks. Schroder and Irving had words during an inbounds play, which led to a double-technical foul and both getting ejected soon after for jawing at each other and the officials.

Irving had to be escorted off the floor and threw his No. 11 jersey into the stands as he exited to the locker room, his departure prompting a 26-15 run from the Lakers as they saw out the third-quarter with an unassailable 15-point lead.

Donovan Mitchell scored 42 points and the Jazz became the first team in the NBA to reach the 40-win mark with a 128-112 victory over the Sacramento Kings in Salt Lake City.

Mike Conley added 26 points and Joe Ingles contributed 20 off the bench, with both players sinking five 3-pointers, to help the Jazz overcome a double-digit deficit en route to a rout of the Kings.

It was Utah’s 24th straight win at home and the team’s 11th win in 13 games. Mitchell didn’t have the most efficient shooting night. He only hit 12 of 31 field goals, including 3-for-12 from 3-point range, but he made up for it at the free-throw line by sinking 15 of 17 foul shots.

De’Aaron Fox scored 30 and Richaun Holmes poured in 25 points for Sacramento, but the Kings couldn’t hold on to an early 11-point lead and saw an 105-104 advantage with 6:05 remaining blown out by a 19-4 surge from the Jazz.

Rudy Gobert and Royce O’Neale only combined for 11 points, but O’Neale had a team-high 14 rebounds and Gobert hauled down 11 boards with two blocked shots.

Joel Embiid scored 27 points to lead the Philadelphia 76ers to a 117-93 road win over the Oklahoma City Thunder in what was his first time playing both ends of a back-to-back since returning from missing 10 games due to a knee injury.

Embiid, Ben Simmons and Furkan Korkmaz scored 10 points each in the opening quarter as the 76ers jumped out to a 37-25 lead. Korkmaz finished with a season-high 20 points and Simmons added 13, while Dwight Howard had 13 rebounds in less than 15 minutes.

The Thunder were made to pay for 22 turnovers, which led to 32 for Philadelphia, who turned the ball over just nine times in comparison.

Darius Bazley led the Thunder with 17 points having missed the last 17 games with a shoulder injury, while Luguentz Dort contributed 15 in his return from a seven-game absence. Tony Bradley, playing his first game against the 76ers since being traded by Philadelphia in late March, had 16 points and 14 rebounds.

Oklahoma rookie Aleksej Pokusevski had been holding his right arm often during warmups and lasted just eight minutes before exiting the game.

The Thunder shot 50 percent from the field, their first loss of the season while shooting at that clip or better. Oklahoma City were just 9 of 19 at the free-throw line in its sixth straight defeat.

Stephen Curry poured in a game-high 38 points to move within 18 of Wilt Chamberlain’s career franchise record of 17,783, lifting the Golden State Warriors to a 125-109 victory over the Houston Rockets.

Andrew Wiggins chipped in with 25 points and Jordan Poole 21 off the bench for the Warriors, who were coming off a potential soul-crushing, 110-107 home loss to Washington the night before in their pursuit for a bottom-end playoff spot in the Western Conference.

John Wall, who sat out Friday’s 126-109 road loss to the Los Angeles Clippers, returned to pace the Rockets with 30 points alongside seven assists. D.J. Augustin had 19 points, while Christian Wood and Kelly Olynyk, as well as supplying 11 rebounds, contributed 18 apiece for the Rockets, who lost for the seventh time in their last eight games.

Saddled with three early fouls, Curry was held to 10 first-half points before exploding for 22 in the third quarter, by the end of which Golden State led 94-80.

Curry, who also had a team-high eight rebounds, has scored 32 or more points in six straight games, a career-best run and the longest streak of any player in the NBA this season.

Golden State outshot the Rockets 53.8 percent to 46.4 percent to clinch the win despite having to go without Kelly Oubre Jr., who injured his wrist in Friday’s loss to Washington, before losing James Wiseman in the first quarter to a knee injury.

Enes Kanter set a franchise record with an NBA season-best 30 rebounds and also scored 24 points to lead the Portland Trail Blazers to a 118-103 victory over the Detroit Pistons.

Kanter, who also set a career high for his board work, broke the Portland mark set by four-time All-Star Sidney Wicks on Feb. 26, 1975, against the Los Angeles Lakers. Kanter also set a franchise mark with 12 offensive rebounds.

Kanter collected his 27th rebound with 3:38 left to set a career best and match Wicks’ record, putting the ball in the basket one second later, before setting the franchise mark with a defensive board 18 seconds later. He is the first NBA player to collect 30 rebounds in a game since Dwight Howard for the Charlotte Hornets in March, 2018.

He put up 16 rebounds in the first half alone to help Portland hold a 59-50 lead at the break,

Kanter had 16 rebounds in the first half to help Portland hold a 59-50 half-time lead, which they extended to 95-76 at the end of the third before pulling away in the final stanza.

Devin Booker’s 27 points, double-doubles from both Chris Paul and Deandre Ayton, and a dominant third quarter powered the Phoenix Suns to a 134-106 rout of the Washington Wizards, who were without NBA-leading scorer Bradley Beal.

Raul Neto scored 14 of his team-high 24 points before intermission, including a free throw just before the break that gave the Wizards a lead. But Jae Crowder connected on one of his two first-half 3-pointers at the halftime buzzer, giving Phoenix an advantage that quickly ballooned in the second half.

A 21-4 run through the first 3:43 of the third quarter set the tone for a 44-24 period. The Suns faced little resistance from there. Paul scored 13 points and dished 10 assists, Ayton shot 7-of-10 from the floor for 14 points and grabbed 10 rebounds, and all five Phoenix starters scored in double-figures. Crowder finished with 11 points and Mikal Bridges added 15.

Another three Suns reserves scored in double-figures. Cam Payne shot 6-of-9 from the floor for 14 points and passed for seven assists, Jevon Carter shot 4-of-10 from 3-point range and finished with 14 points, and Cam Johnson added 12 points.

Just three Wizards scored in double-figures. Russell Westbrook recorded his 22nd triple-double of the season with 17 points, 14 assists and 11 rebounds, but shot 0-of-4 from long range and 6-of-17 from the floor overall; Ish Smith also came off the bench for 12 points and six rebounds.

Gary Trent Jr. scored 25 of his career-high 44 points in the first half to lift the visiting Toronto Raptors to a 135-115 victory over the Cleveland Cavaliers.

Trent made 17 of 19 shots from the floor – including seven of nine from 3-point range – to pace the Raptors. He drained a mid-range jumper with 3:48 remaining in the third quarter to eclipse his previous career-high point total of 31, set in Toronto’s 113-103 loss to the Oklahoma City Thunder on March 31.

Malachi Flynn finished with 20 points for the Raptors, who erupted for 47 points in the opening quarter after making 17 of 20 shots from the floor (franchise-best 85.0 percent). Toronto didn’t take its foot off the gas and set a franchise record for points in a half at 87.

The Raptors finished the game shooting 61.6 percent from the floor and 53.1 percent from 3-point range having been missing key men in Pascal Siakam (rest), Kyle Lowry (foot infection) and Fred VanVleet (hip).

Collin Sexton scored 29 points, Darius Garland had 19 and Kevin Love added 18 for the Cavaliers, who trimmed a 38-point deficit to 12 with 9:30 remaining in the fourth quarter. Cleveland, however, ran out of steam and saw its modest two-game winning streak come to a halt.