Manchester United defeated Granada 2-0 in the first leg of their Europa League quarterfinal tie, while Arsenal conceded a stoppage-time equaliser in a 1-1 draw at home to Slavia Prague. 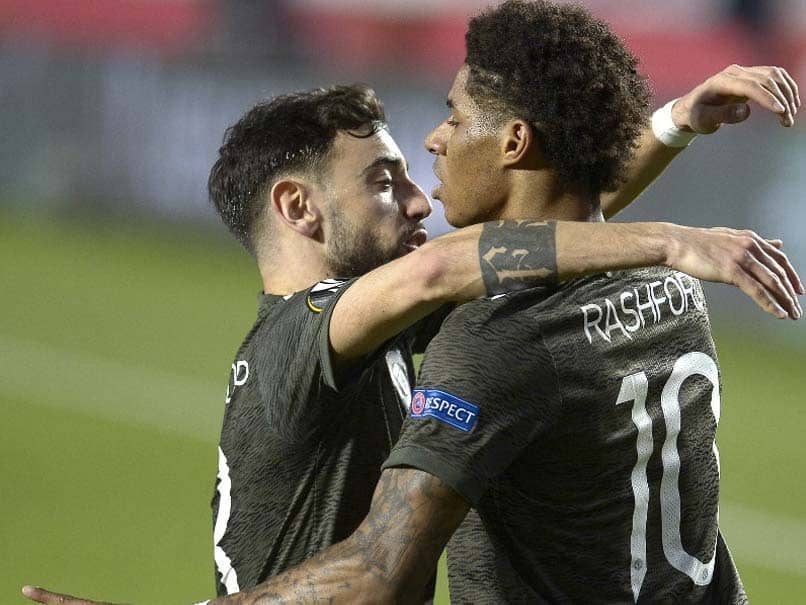 Bruno Fernandes and Marcus Rashford got on the scoresheet for Manchester United vs Granada.© AFP

Manchester United defeated Spanish club Granada 2-0 in the first leg of their Europa League quarter-final tie in Spain on Thursday, while Arsenal conceded a stoppage-time equaliser in a 1-1 draw at home to Czech champions Slavia Prague. Marcus Rashford raced on to a long ball sprayed upfield by Victor Lindelof to fire United in front at Los Carmenes on 31 minutes against a team enjoying a brilliant debut European campaign. Bruno Fernandes converted a late penalty after he was caught off the ball by Yan Eteki, with the Portuguese midfielder’s spot-kick squirming agonisingly through the hands of Rui Silva.

“They (Rashford and Fernandes) have been exceptional, so important for us,” United manager Ole Gunnar Solskjaer told BT Sport.

“It was a very good run by Rashford, takes the ball fantastically. Bruno is so confident on penalties even though the keeper almost saved it.”

However Solskjaer will be without the suspended trio of captain Harry Maguire, Luke Shaw and Scott McTominay for the second leg at Old Trafford next week.

“It was not a perfect night,” he added. “We got three yellow cards and three suspensions. 2-0 is very good result. We know how difficult it is to come to Spain.”

Yangel Herrera volleyed against the post for Granada as Spain international David de Gea kept a clean sheet on his first appearance for Manchester United since the end of February.

Arsenal’s poor league form under Mikel Arteta has left the Gunners with the Europa League as their only hope of silverware this year, but the 2019 runners-up were denied victory at the Emirates following a 94th-minute header by Tomas Holes.

Nicolas Pepe had come off the bench to give Arsenal the lead four minutes from time, only for Holes to nod in at a corner and extend Slavia’s unbeaten run to 22 games, having already knocked out Leicester City and Rangers.

“The game was under control. We got the goal we wanted but we missed some big chances as well.

“We played two or three balls we shouldn’t do and we put ourselves on the back foot and conceded the corner. They put bodies in there and it can happen. It changes the feeling after the game.”

Roma, the only Italian club remaining in Europe this term, came from behind to take down four-time European champions Ajax 2-1 in Amsterdam.

Lorenzo Pellegrini’s free-kick on 57 minutes slipped through the grasp of Ajax keeper Kjell Scherpen and Roger Ibanez won the game for Roma late on, smashing home a superb volley.

Unai Emery’s Villarreal got the better of Dinamo Zagreb in Croatia, as Gerard Moreno’s penalty just before the interval secured a 1-0 victory.

Emery won the Europa League in three consecutive years with Sevilla and took Arsenal to the 2019 final.

Champions League: Phil Foden’s second-half winner sealed a 2-1 victory at Borussia Dortmund on Wednesday to send Manchester City through to the semis 4-2...

Real Madrid were far from their best, but did not need to be to set up a semi-final clash with Chelsea as Los Blancos...

Liverpool vs Real Madrid: Liverpool will have to overcome a 1-3 deficit against Real Madrid when they host Zinedine Zidane’s team at Anfield in...

Previous articleIPL records: who has die best economy rate?
Next articleLaw & Order: Organized Crime: Benson Returns (Already!) With Concerns: ‘I Am Worried About You, Elliot’