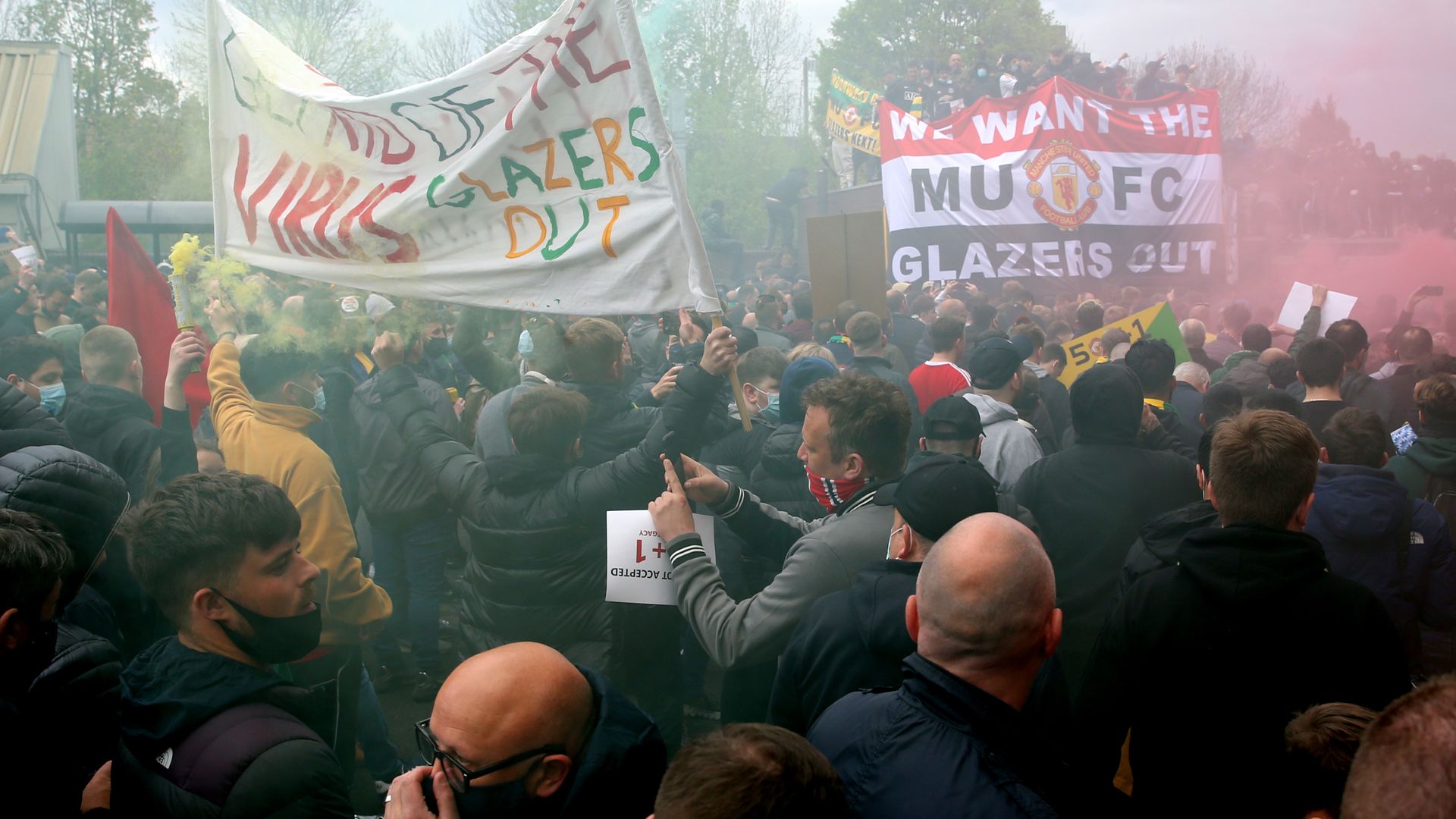 Manchester United’s Premier League game against Liverpool at Old Trafford has been postponed following protests against the Glazer family.

Hundreds of fans got into the stadium ahead of the behind-closed-doors contest, which was originally scheduled for a 4.30pm kick-off before being delayed and then called off completely.

Discussions are taking place around finding a new date for the fixture.

Two police officers were injured during Sunday’s demonstrations, with one hospitalised after “sustaining a significant slash wound to his face”, according to Greater Manchester Police.

A United statement read: “Following discussion between the Police, The Premier League, Trafford Council and the clubs, our match against Liverpool has been postponed due to safety and security considerations around the protest today. Discussions will now take place with the Premier League on a revised date for the fixture.

“Our fans are passionate about Manchester United, and we completely acknowledge the right to free expression and peaceful protest.

“However, we regret the disruption to the team and actions which put other fans, staff, and the police in danger. We thank the police for their support and will assist them in any subsequent investigations.”

The Premier League condemned all the “acts of violence, criminal damage and trespass, especially given the associated COVID-19 breaches” in a statement after the postponement was confirmed.

“The security and safety of everyone at Old Trafford remains of paramount importance,” a Premier League statement read.

“We understand and respect the strength of feeling but condemn all acts of violence, criminal damage and trespass, especially given the associated COVID-19 breaches.

“Fans have many channels by which to make their views known, but the actions of a minority seen today have no justification. We sympathise with the police and stewards who had to deal with a dangerous situation that should have no place in football.

“The rearrangement of the fixture will be communicated in due course.”

Supporters also gathered outside the team’s hotel – The Lowry Hotel in Manchester, where the United team were staying before the game – ahead of Sunday’s match at Old Trafford.

Greater Manchester Police said they were “aware” the protests were due to take place and “were working closely alongside partners to ensure those that attended were kept safe whilst enabling their right to peaceful protest”.

“By late afternoon around 200 protestors had gathered outside the Lowry and over 1,000 at Old Trafford,” the police statement read.

“Officers continued to closely monitor the situation, engaging with those present but as the groups grew in size; it became clear that many of those present were not intending to exercise their right to peaceful protest. Flares were let off and bottles thrown at officers.

“Protestors outside Old Trafford became especially aggressive and antagonistic towards police before a group of about 100 forced entry to the ground with some United staff having to lock themselves in rooms.

“Those in the stadium were evicted by officers but outside on the forecourt hostility grew with bottles and barriers being thrown at officers and horses.”

Many United supporters are still angry and upset over their club’s role as one of the founder members of the proposed breakaway European Super League.

The plans added to years of discontent and protests from supporters following the controversial takeover by the Glazers in 2005.

United owner Joel Glazer, unveiled as Super League vice-chairman when the announcement was made, apologised in an open letter to all the club’s fans after they were forced to pull out of the plans.

However, that apology seems to have been rebuffed by the club’s supporter base who protested outside Old Trafford last week which followed even more protesting at United’s Carrington training ground.

Neville: Owners to blame for protests

“This is a consequence of the Manchester United owners’ actions two weeks ago. There is a general distrust and dislike of the owners, but they weren’t protesting two or three weeks ago.

“The Glazer family are struggling to meet the financial requirements at this club and the fans are saying that their time is up.

“My view is quite simply that they’re going to make a fortune if they sell the club and if they were to put it up for sale now I think the time would be right, and it would be the honourable thing to do.

“There’s huge discontent, not just across Manchester United fans, but I think for football fans up and down the country and I think they are just saying enough is enough.

“The Glazer family have been resilient and stubborn for many, many years. I think they are struggling to meet the financial demands that this club needs and have done for some time.”

“I’m disappointed that the game’s off because we’re footballing people, but I think United fans have just had enough.

“They’re doing it because they love the club and it’s not what has happened over the last few weeks with the Super League, I think it’s been building for a number of years now, that frustration, and they’ve come to the end and thought ‘enough is enough’.

“It’s been building up over the last few years – disappointment in communication, stuff going on in the backroom, tickets, whatever it might be. The leadership of the club has not been good enough, when they look at the owners and feel it’s just about making money.

“The statement today is huge for the game to be called off.

“Sometimes you have to put a marker down for people to take notice and this will go all over the world now and people will have to sit up and take note.

“Hopefully the owners of Man Utd will say ‘these fans are deadly serious’ and there’s more to come. This is just the start of it for United fans, I guarantee you.

“What happens at the next home game, is it the same? This is just the start for United fans and their plan is for the United owners to give in and sell the club.”

Previous articleIPL 2021: We have a number of leader in side and there are talks to be had – Williamson on Warner
Next articleAdrian Dunbar wife: Line of Duty star praises wife as the only one who could 'handle' him