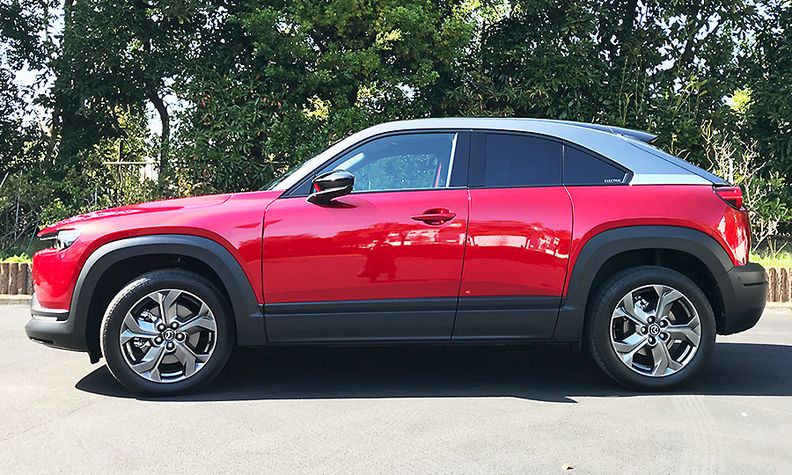 It rides on a versatile platform engineered for a variety of electrified drivetrains, including a mild-hybrid version and a full-electric variant. And next up will be a rotary engine-powered offering that can run as a series hybrid or possibly a plug-in. The U.S. is expected to get both the EV and rotary versions as early as next year.

But the MX-30 is also a compromise car.

It is not quite a crossover, nor a hatchback. It technically has four doors, but it aims for a coupe feel, with rear doors that swing backward. And it comes in both all-wheel drive and front-wheel drive.

A test drive of the e-Skyactiv full-electric version here highlighted some of the design compromises of trying to serve multiple segments.

For starters, there is the wasted space. A dedicated EV might offer ample rear cargo space since there’s no gas tank. But the MX-30 EV still has to leave room for where the fuel tank would be, and as a result, its cargo area goes barely deeper than the bumper.

Because the layout also has to accommodate the awd mild-hybrid version, a propeller shaft tunnel runs between the seats — even though it isn’t needed in the EV version. So as competitors extol their flat floors and expansive interiors, Mazda’s EV has an unnecessary hump.

Up front, the EV has a half-empty engine compartment: Its electric motor and inverter occupy one half, while the other side is wide open to allow installation of the rotary engine for the range-extender version coming down the road.

There is also a gaping cavity leading to the center tunnel, where the prop shaft would be on the mild hybrid.

Interior space comes at a premium. The rear seats are hard to access through the backward-opening doors. The airlinerlike back windows translate to poor rear visibility — both from the driver’s seat and the back seats. The rear seats have sufficient headroom, but they are more geared toward small children and handbags.

But the MX-30 still gets some Mazda-esque flourishes.

The recycled cork trim on the interior is a nice touch. And so is the engineered electronic sound to accompany acceleration, which transforms the EV’s typical electric motor whining hum into more of a familiar Mazda engine growl.

Previous articleIn a statement shared with his combined 14.8 million followers on Twitter, Facebook and Instagram, Thierry Henry said he would remove himself from all social media.
Next articleIndia vs. England 2021: Racquets blown up during the 2nd ODI, 35 arrested