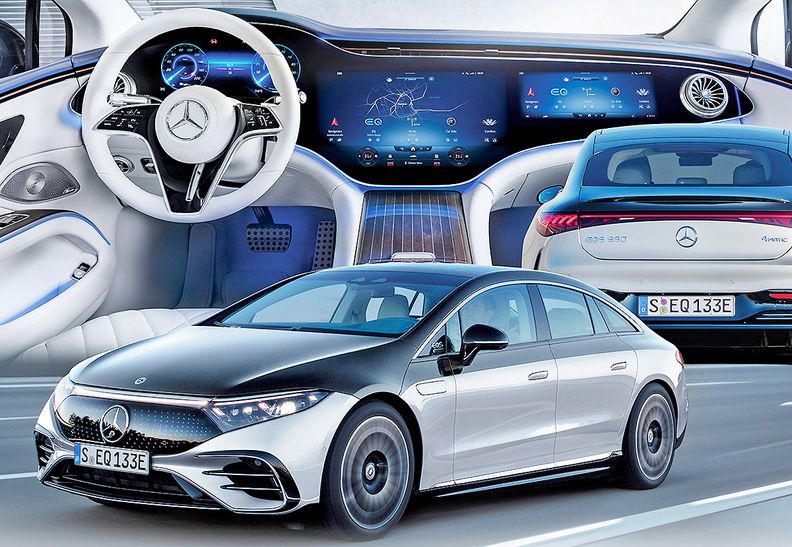 As it wades into the frothy U.S. electric vehicle market, Mercedes- Benz is taking an unconventional approach in a country that skews 77 percent light truck.

The German automaker will first target a sliver of a shrinking market, debuting its all-electric EQ subbrand here with a zero-emission reincarnation of its S-Class sedan.

For Mercedes, offering the luxury EQS sedan is about making a statement — and profit — rather than looking for meaningful market share.

Daimler CEO Ola Källenius described the model as a “Mercedes in every dimension.”

“What you expect from a Mercedes, you will get from this electric car as well,” Källenius said on a media call last week. “It’s not a lesser product just because it is an electric car.”

Mercedes hopes for shock and awe with the EQS, with its sweeping 56-inch dashboard display, automatic doors and an estimated driving range of 400-plus miles.

The EQS is about making the right first impression with a halo model, said Randy Powell, president of Dream Motor Group, which operates four Mercedes-Benz stores in the South.

“If you’re going to enter a market, you want to do it with the best vehicle you’ve got,” Powell said. “It isn’t about sales volume at this point. It’s about leadership and dominance.”

The EQS will roll silently into stores in the fall, arriving as EV kingpin Tesla beefs up its Model S sedan. What follows could be a cage match between the world’s oldest automaker and one of its newest for the mind and wallet share of the top end of the EV market.

Mercedes dealers, who have watched Tesla run away with the luxury EV segment, say the German brand must get it right with the EQS. If it does not upstage Tesla — in technology, performance, and fit and finish — it would be a “grave disappointment,” said Jeff Aiosa, owner of Mercedes-Benz of New London in Connecticut.

“We have certainly allowed Tesla to corner the luxury EV market — shame on us,” Aiosa said. “The EQS must be followed by a cadence of electric models in different segments so that we can finally compete against Tesla.”

“This is the brand that has talked about its engineering prowess for a century,” he said. “The fact that they were not able to be right there with Tesla at the birth of the modern EV market hurts their image.”

If Mercedes is worried about the EQS’ prospects for reaching the top of the luxury EV market, Källenius isn’t showing signs of it.

The large luxury segment has “forever and a day been dominated by Mercedes” with the S-Class, he said. “With the EQS, it’s almost like we have the two best flavors in the ice cream parlor.”

As Mercedes’ top-end EV, the EQS will focus its sales strategy on exclusivity and profitability, rather than volume.

“We’re not going to push the car into the market,” Källenius said. “It’s very much pull. The essence of luxury is build one less than demand.”

But it is still a gamble. By not coming out of the gate with a crossover, Mercedes could miss the “liftoff point in EV volume,” said Jeff Schuster, president of global forecasting at LMC Automotive.

“While other brands are building on a limited but existing lineup by moving into EV crossovers and SUVs that are more targeted at the mainstream market where consumers are interested, the EQS is a niche within a niche,” Schuster said.

But the EQS wasn’t Mercedes’ first choice for the U.S. Like other automakers, Mercedes planned to debut its electric line with a compact crossover — the EQC. That would have been a logical play: Premium compact crossover sales climbed 20 percent in the U.S. through March, accounting for 21.6 percent of the U.S. luxury market.

But the EQC was not good enough to wow American luxury buyers, Mercedes concluded. Its relatively anemic driving range could have made it a tough sell in a market already skeptical about EV practicality. Powered by an 80-kilowatt-hour battery, the EQC has a roughly 290-mile range on a full charge, based on the New European Driving Cycle testing standard.

The EQC wasn’t Mercedes’ “best representation in terms of range and performance, so they didn’t want to come to this market with it,” Aiosa said.

But even with the EQS delivering new attention to the old brand, Mercedes will still need a fleet of competitive crossovers and SUVs to compete in the EV world.

“We’re certainly not going to do the volumes with the EQS that will get us into a dominant position in the EV market,” Aiosa said. “We look to next year to have more U.S. market-focused product to drive volume.”

Next year, Mercedes-Benz will bring up to three battery-electric utility vehicles and an electric midsize sedan to the U.S., sources have told Automotive News.

“With the product offering that is in the pipeline, we’re definitely going to expand the pie,” Källenius said. “With regard to the luxury end of the market, in the segments where we’re present, we want to get our fair share.”