Yangon, Myanmar – An inquiry set up by the government of Myanmar to investigate the 2017 crackdown that prompted hundreds of thousands of Rohingya to flee the country is expected to report this month, but activists and independent observers are sceptical about the story it will tell, despite promises of accountability from the country’s civilian leader Aung San Suu Kyi.

“Accountability through domestic criminal justice is the norm,” State Counsellor Aung San Suu Kyi said last month when she took the stand at the International Court of Justice in The Hague to defend the country against charges of genocide against the Muslim Rohingya minority.

“Only if domestic accountability fails, may international justice come into play.”

The Myanmar military has been accused of genocide by the United Nations and others for the brutal crackdown on the country’s Rohingya Muslim minority, which prompted more than 740,000 to flee.

A UN fact-finding mission report estimated at least 10,000 were killed.

Addressing the ICJ, Aung San Suu Kyi said an internal investigation by the Independent Commission of Enquiry (ICOE) was underway and that the commission’s report would shed light on what really happened in 2017.

“There is currently no other fact-finding body in the world that has garnered relevant first-hand information on what occurred in Rakhine in 2017 to the same extent as the Independent Commission of Enquiry,” she said. 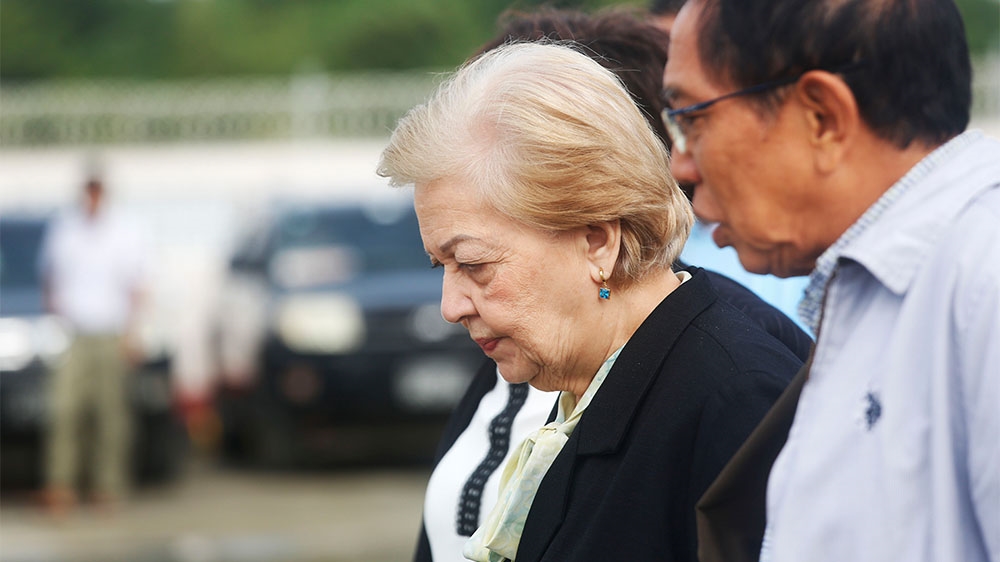 Rosario Manalo, seen here visiting Sittwe, is the chair of Myanmar’s Independent Commission of Enquiry for Rakhine. Many are sceptical about the commission’s work [File: Nyunt Win/EPA]

The government has rejected the findings of the UN and severely restricted the ability of neutral observers and journalists to investigate. As the public awaits the findings from the ICOE, human rights activists and the Rohingya themselves expect little.

“We do not believe the Commission of Enquiry, which was formed by the genocidal Myanmar government, because the government is not sincere to investigate any crimes committed against the Rohingya community,” Khin Maung, executive director of the Rohingya Youth Association, told Al Jazeera.

There have been concerns about the independence of the ICOE from the very beginning.

Zaw Htay, a spokesman for the president’s office, said the commission was created to respond to “false allegations made by the UN Agencies and other international communities”.

ICOE head, Philippine diplomat Rosario Manalo, has stated there would be “no blaming of anybody”, in spite of the fact that the panel’s website states that it means to assign accountability for any violations.

“It is not a diplomatic approach, and a very bad approach, in fact, to be doing finger-pointing, blaming, to say ‘you’re accountable’,” Manalo said, adding: “That is not looking for peace.”

Also on the panel are Kenzo Oshima, a former Japanese ambassador to the UN, and Myanmar officials Mya Thein and Aung Thun Thet.

The latter is also a member of the Union Enterprise for Humanitarian Assistance, Resettlement and Development in Rakhine (UEHRD), which the UN fact-finding mission has accused of consolidating the “consequences of war crimes” by building infrastructure on land abandoned by the Rohingya when they fled.

Khin Maung noted that if the government truly wanted to address the situation, it would not have stifled independent investigation or banned UN special rapporteur Yanghee Lee from the country. 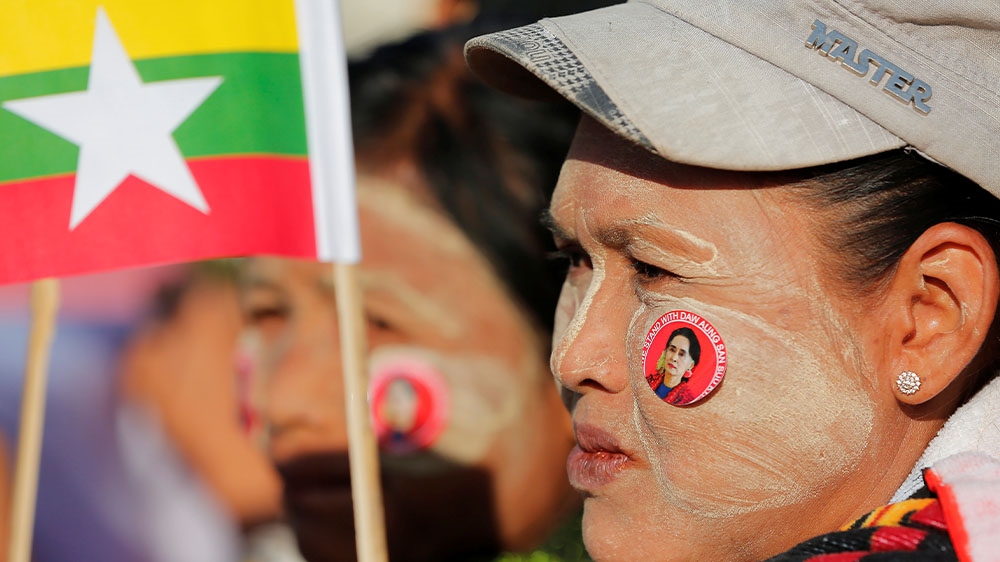 Aung San Suu Kyi retains strong support within the country; protesters took to the streets to back her as she defended Myanmar against charges of genocide at the ICJ [File: Myat Thu Kyaw/Reuters]

Lee began her final fact-finding mission on January 15 but will visit only Thailand and Bangladesh during a week of meetings and investigations.

“We lost trust in Myanmar government,” he said, adding that it was unreasonable to expect the very institutions that committed crimes to investigate themselves.

“Myanmar has set up many domestic commissions and none have conducted a serious, impartial investigation into the atrocities against the Rohingya. Domestic mechanisms have been exhausted and there is a need for international justice,” he said.

No reference to ‘Rohingya’

The commission’s position reflects the government line – blaming the instigation of violence on ARSA rather than interrogating the military’s actions and downplaying decades of discrimination against the Rohingya.

Nowhere does the word “Rohingya” appear on the ICOE website – except in reference to the Arakan Rohingya Salvation Army, an armed rebel group.

Many in Myanmar call the Rohingya people “Bengali”, believing them to be “illegal immigrants”, even though the minority group has lived in Myanmar for many generations.

The ICOE did not respond to Al Jazeera’s requests for comment.

David Mathieson, a Yangon-based independent analyst, said it is “highly improbable” that Myanmar is capable of investigating any of its conflict areas fairly.

Rather than holding rights abusers accountable, Mathieson believes the true purpose of the report is “sanitising a crime scene”.

“The ICOE is an exercise in exculpating the military by admitting some abuses, pinning the blame on the Rohingya terrorists, and saying the scale of Western reporting was exaggerated,” he said via email, adding that these kinds of piecemeal admissions “distract from the larger culture of abuse and impunity that permeates the Myanmar military”. 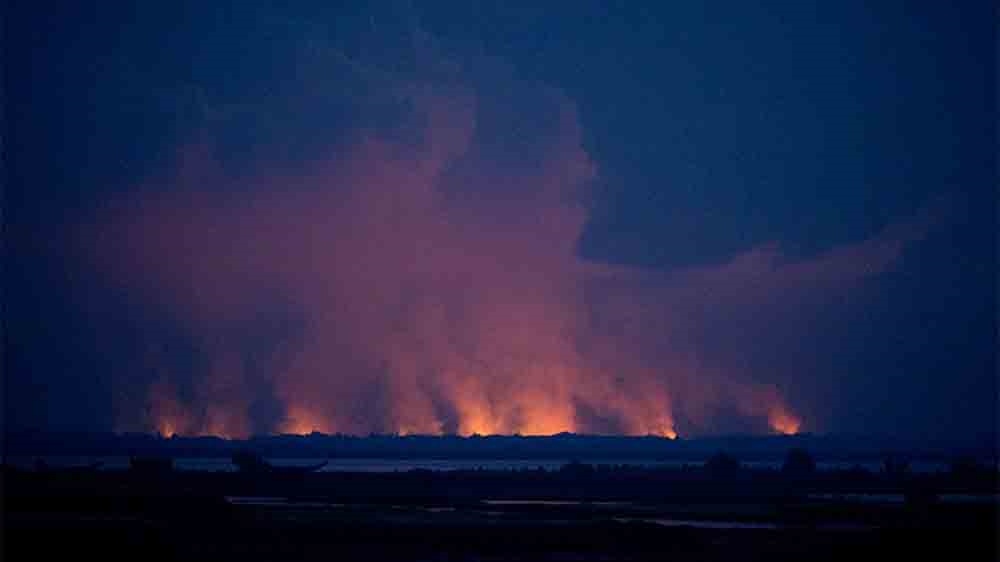 Northern Rakhine villages in flames on September 3, 2017, as hundreds of thousands of Rohingya fled to Bangladesh [Bernat Armangue/AP Photo]

Both the UN fact-finding mission and the International Commission of Jurists have concluded that the ICOE cannot be seen as reliable.

Mathieson said while there was some level of anticipation over the report, he expects those “who believe the violence was overblown by western reporting and rights activists” will “welcome any kind of report if it backs this view” regardless of its accuracy.

Nevertheless, some diplomats and civil society groups are hoping for something of substance from the ICOE. At a recent lecture at Yangon University, US Ambassador Scot Marciel said the report was an “important step” and he hoped it would provide new information that the government would “acknowledge” and “follow up” on.

In a recent interview with Bangladeshi media, Japan’s ambassador to the country said it was “indispensable” for Myanmar to adopt the ICOE’s recommendations.

But in a statement soon after the commission was established in 2018, the International Commission of Jurists warned that “giving any recognition to [the report] was likely to undermine and delay effective international measures for justice and accountability.”

Mathieson is also concerned the report has the potential to do more harm than good, saying that those in the diplomatic community supporting its release may not have considered the full consequences.

“I think depending on the quality of the report, the political results will be an emboldened military that will be given a green light to continue an entrenched culture of operational savagery, and a belligerent approach to political and peace concessions,” he said.

One of the reasons the market has been so strong in the past few years is because of low inflation. Most economics are baffled by this: they don’t understand how inflation could be so low when employment is so high. They expect wage pressure to push up prices overall — but this is not happening.We…
Read more

Bobby Ryan's sensation much better nowadays. The Ottawa Senators' veteran talked to the media Friday about his roadway...
Read more