Nancy Drew EPs Preview the Fallout From Those Sexy, Spooky Finale Twists: ‘The Fun of Season 3 Is…’ 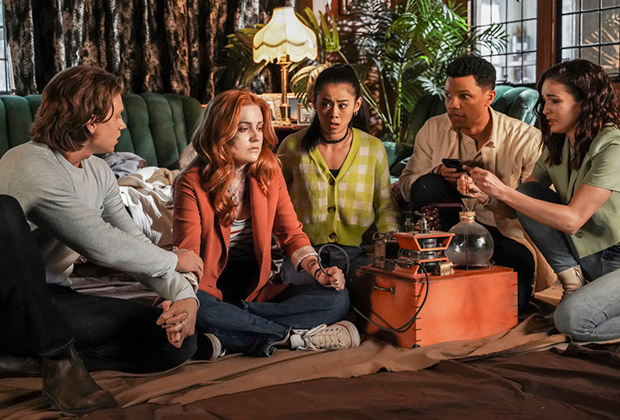 Nancy Drew capped off its bonkers second season on Wednesday with a fittingly eventful finale, and life in Horseshoe Bay will never be the same again.

A quick recap: Upon discovering that Nancy has been possessed by the wraith all season, we got some backstory on the evil little bugger — it was apparently created by one of Nancy’s descendants, Temperance Hudson, in an attempt to break through a barrier designed to keep her out of Horseshoe Bay. Severing the wraith’s hold on Nancy meant traveling to New York, where another of Temperance’s descendants was storing the very device required to complete the process.

Thus began a twisted journey through Nancy’s subconscious, which confirmed that the wraith had been feeding — nay, feasting — off her repressed trauma. She was able to break the wraith’s hold over her, while also deciding that her painful past could no longer be ignored. “I know it’ll be hard, and every day I’ll have to face the things I never wanted to,” she acknowledged. “But I’m ready.” Nancy’s little vision quest also helped her to accept her brewing feelings for Ace, but when she paid him a house call, she learned that he had just left on a “romantic road trip” with Amanda. (Speaking of the Bobbsey twins, Nancy dumped Gil earlier in the hour, finally seeing that he may not have been the best influence on her.) 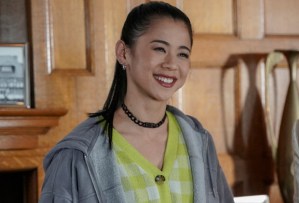 In non-Nancy news, Odette agreed to suppress herself for the remainder of George’s limited life, a favor which George returned by allowing her unwelcome houseguest to kiss Bess goodbye one last time. (Was it heartbreaking? Sure. But come on, it’s George’s body!) Newly inspired to grab life by the horns, George then asked Nick to marry her.

Then came the final gag: Myrtle Hudson, the distant relative Nancy met earlier in the episode, was revealed to be Temperance in disguise! She’s been biding her time for generations, and now that Nancy has entered her life, she’s finally able to break through the barrier keeping her out of Horseshoe Bay.

Below, executive producers Melinda Hsu Taylor and Noga Landau answer a few of our burning questions about the finale… and beyond:

TVLINE | First of all, I’m fully obsessed with that baby wraith.
TAYLOR | [Laughs] When Noga calls me, her screen ID is the baby wraith.
LANDAU | If we ever meet in person, you’ll see why. The baby wraith is a representation of my true identity.

TVLINE | It didn’t look like CGI. Was it a real puppet?
LANDAU | It’s a real, legit working puppet that was puppeted by two people on either side of it.
TAYLOR | It had very thin metal rods on each of its limbs, so just imagine these big man hands on either side of it getting those little hands to move as it crawled over that log. [Laughs]

TVLINE | I also might have squealed internally at Nancy and Ace realizing their feelings for one another. Should we brace for a full-blown Ace/Nancy/Amanda love triangle in Season 3?
LANDAU | What we’ve been saying is this: In our writers’ room, Team “Nace” is living strong. We make sure you see them just enough that you feel fulfilled without throwing the whole meal at you all at once.
TAYLOR | There are also people on Team “Acemanda,” just for the record. [Laughs] And we love the Bobbseys. Scheduling and story real estate might delay us from seeing them again for a minute as we head into Season 3, but they are very much in the landscape and on people’s minds.

TVLINE | And that proposal! I need an answer. What’s going through Nick’s head right now.
TAYLOR | Part of the premiere of Season 3, which we’re just writing now, is about exactly what’s going on in his head. It’s not too big a spoiler to say that wedding planning will be in the air. We’re not going to torture the audience. We also want to delve into what it’s like to be Nick, who had a youth that was cut short by time in prison, and who’s looking at his life ahead of him and his relationship with George. And George will have her own things to deal with. It may be that her long-absent father comes out of the woodwork when news of her impending wedding gets out on social media, that kind of thing. We’re definitely going to explore them as couples and as individuals.

TVLINE | I feel like Nick’s exploration began when he became comfortable sharing his unique perspective as a Black man.
LANDAU | Absolutely. In a lot of ways, Nick’s journey on the show is a real coming-of-age story. We’ve seen him as a kid living above the cars in a mechanic shop, then as a businessman, and in a lot of ways now trying to be a family man for George and her sisters. And also his identity as a Black man in the world, how that’s evolving. The character is really special to us. 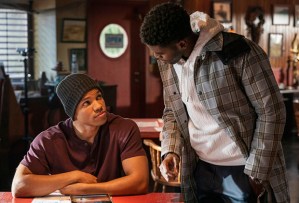 TVLINE | Tom Swift really inspired him.
LANDAU | That was an awesome episode for those characters. We love our Tom Swift so much.

TVLINE | I’m hoping that the spinoff gets picked up, but if it doesn’t, will Tom still have a place in the Drew-niverse?
TAYLOR | Oh, yes. We’d have a place for him no matter what. We’re just choosing embracing the reality where we will get picked up, even though we have no information to base that on. [Laughs] All we can do is wait for the Powers That Be to make their decision.

TVLINE | Speaking of powers… Temperance. Yikes. What are her plans for Horseshoe Bay?
LANDAU | Well, they’re not good. Part of the fun of Season 3 is that her intentions run perfectly counter to what Nancy’s intentions for Horseshoe Bay are going to be. So we’re really pitting our Luke Skywalker against our Darth Vader, in that sense. It’s going to be so fun to see the conflict that brews between those two characters.

TVLINE | I’m excited to see what’s brewing in the Drew house now that Nancy, Carson and Ryan are all living under the same roof. Shenanigans, perhaps?
TAYLOR | We have so many ideas for shenanigans. Because Riley Smith is a fantastic actor with a ton of range, it’s easy to lean into the comedic stuff that he brings while also getting back to the dramatic and heartfelt connection he’s building with Nancy. He also has his own issues with his own parents, and has no idea how to be one himself, so Carson is kind of stuck with another large child. That offers a lot of opportunity for funny domestic situations, like, what’s going on with the chore wheel? There’s fun and mystery and drama to be had, but I also just love seeing those three together. Riley and Scott [Wolfe] together are just genius. A lot of that dishwashing stuff was improvised.

TVLINE | That last shot of those three on the couch, with Nancy resting her head on Carson’s shoulder while Ryan opened cookies, spoke volumes about their group dynamic.
TAYLOR | Ryan’s genuinely excited about the cookies! I’m glad you caught that head-on-the-shoulder moment. It’s something I think a lot of kids do, just cuddle up like that, and it was the first time Nancy has done that with Carson in many months. She wasn’t even aware of it, but Carson totally is. For him, that’s a big moment.

TVLINE | Now that both of Nancy’s dads are clued in about the supernatural, will they be getting more involved in that side of things?
TAYLOR | Short answer? Yes. [Laughs]
LANDAU | They’re not comfortable with all of that. It’s not what they do as crime solvers. Just like in the original canon, Carson is a dad who’s a lawyer. That’s how he gets into cases and crimes. Ryan is fully aware of the supernatural now, but he’s not as savvy about it as the kids are. Some really fun stories come from the adults having to reckon with absurd supernatural situations that the kids are a lot more comfortable with.

Fellow Drewds, what did you think of Wednesday’s finale? And what are your hopes for Season 3? Weigh in via our polls below, then drop a comment with more of your thoughts.