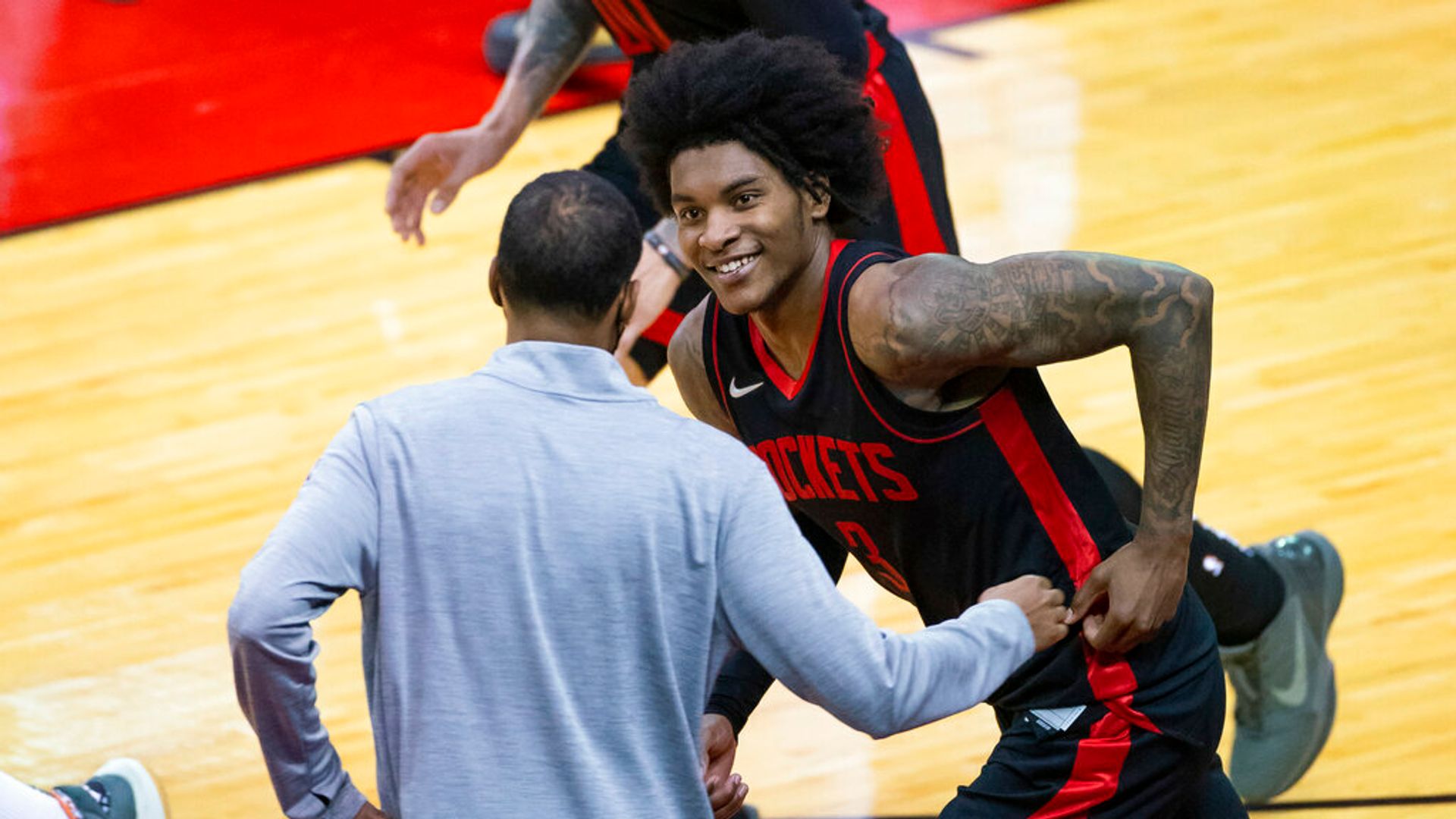 Kevin Porter Jr scored a career-high 50 points and was one of three Houston players to post double-doubles, as the Rockets upset the visiting Milwaukee Bucks 143-136 on Thursday.

Porter Jr’s productive night meant that became the youngest player ever to log a 50-point double-double with assists.

Elsewhere in the contest, Milwaukee lost two-time MVP Giannis Antetokounmpo to a right ankle sprain early in the first quarter.

There were victories for the Brooklyn Nets and the Dallas Mavericks. The Denver Nuggets notched up their fourth win in a row, while the Timberwolves and Pelicans also tasted victory on the night.

Not only did Porter Jr make history during the Rockets’ result against the Bucks, but his team turned around a 73-65 deficit at the break, after the Bucks had shot at 55.1 per cent in the first half.

Porter and Christian Wood combined for 37 points prior to the break, which set the stage for their explosive third quarter, one the Rockets started with a 20-6 blitz.

Wilson, acquired from Milwaukee in the deal that sent P.J. Tucker to the Bucks at the trade deadline, added 15 points and 12 rebounds for the Rockets.

Khris Middleton led the Bucks with 33 points, and Bryn Forbes added 30 on 6-of-10 3-point shooting off the bench. Jrue Holiday tallied 29 points and 10 assists for the Bucks.

Kevin Durant shot 16 of 24 from the floor en route to matching his season-high of 42 points, Alize Johnson recorded 20 points and a career-high 21 rebounds, as Brooklyn completed a season sweep of Indiana in Indianapolis.

The Nets (43-20) have dealt with injury issues much of the season, and Thursday was no exception with Kyrie Irving announced as a late scratch from the line-up due to groin soreness.

Durant carried the load with 26.9-point per game, pacing the Nets to a 52.8 per cent night shooting from the floor. All five Nets starters scored in double-figures, with Jeff Green, Joe Harris and Landry Shamet all hitting for 14 points and Tyler Johnson adding 11.

Brooklyn’s balanced scoring and effective shooting led to an almost wire-to-wire lead, which swelled to as many as 23 points before a late Pacers rally. The Pacers got 36 points from Caris LeVert, who produced a 5-of-9 performance from 3-point range.

Tim Hardaway Jr. scored a career-high 42 points, helping the Dallas Mavericks overcome the absence of Luka Doncic in a 115-105 victory over the Detroit Pistons.

Trey Burke added 15 points for Dallas, who moved a game ahead of Portland for the No 6 spot in the Western Conference. Doncic missed the game because of a left elbow issue, and the Pistons were without their leading scorer as well in Jerami Grant.

The game was tight until the final minute. Hardaway scored 17 points in a row during a fourth-quarter stretch, capping that run with a 3-pointer with 1:05 remaining that put the Mavericks up 109-105.

During that stretch, Detroit also fouled Hardaway twice while he was shooting a 3, and he made all his free throws.

The Nuggets, who had seven players score in double figures, earned their fourth win in a row.

OG Anunoby scored 25 points while Kyle Lowry and Khem Birch added 20 apiece for Toronto. The Raptors played without guard Fred VanVleet due to a hip injury.

Neither team led by more than five points in the first quarter and the biggest lead was six by Denver, late in the second. Toronto quickly tied it at 50-all.

Facu Campazzo made five free throws in the final minutes, and Shaquille Harrison’s jumper with 4.2 seconds left gave the Nuggets a 59-57 lead.

The Raptors took a 63-61 lead early in the third, and the game stayed close through most of the period. Denver went ahead 81-75 on a steal and layup, but Yuta Watanabe and Birch made 3-pointers in an 8-2 run that tied it.

Harrison went 2-for-4 from the line and P.J Dozier hit a layup and the Nuggets took a slim 87-85 lead heading into the fourth.

Karl-Anthony Towns scored 22 points and came through during a crucial fourth-quarter stretch, propelling Minnesota over visiting Golden State in Minneapolis.

The loss was a costly one for the playoff-hopeful Warriors (31-32), who not only lost ground in their attempt to move up in the Western Conference standings, but also fell a game closer to the New Orleans Pelicans in their duel for the 10th and final post-season play-in position.

After trailing most of the way, the Warriors used 16 third-quarter points from Stephen Curry to take a two-point lead into the final period.

A hoop by Andrew Wiggins drew Golden State even at 99-all with 8:41 left, and another at the 5:24 mark kept the Warriors within 109-107 before Towns led a Minnesota charge.

The Pelicans, who won for the third time in five games, moved within three games of the No. 10 spot in the Western Conference with the win and Golden State’s loss at Minnesota. The Thunder lost for the 15th time in 16 games.

Brandon Ingram added 24 points for the Pelicans, who were just five of 29 on 3-point attempts, but scored 64 points in the paint. Luguentz Dort led the Thunder with 17 points.

Want to watch even more of the NBA and WNBA but don’t have Sky Sports? Get the Sky Sports Action and Arena pack here