Stranger Things 4 might not be coming to Netflix this summer, but that doesn’t mean fans can’t still return to Hawkins, Indiana for a new adventure of a different kind.

As we wait for the next season of Stranger Things and news of when exactly the season will arrive, Netflix has revealed plans to debut a new companion series of sorts in the form of Rebel Robin: Surviving Hawkins, a new fiction podcast series set within the same universe of the show!

This full-cast fiction podcast will welcome back Maya Hawke’s Robin, a breakout favorite from season 3, in a companion pod to the forthcoming Robin-centric novel, Stranger Things: Rebel Robin by author A.R. Capetta. Below we share everything we know so far about the upcoming podcast including its release date, cast and more!

As confirmed by Netflix during its Geeked Week event on June 9, Rebel Robin: Surviving Hawkins will debut on Tuesday, June 29, 2021. The six-episode series will then unfold weekly with new episodes dropping each week through early August.

Although we understand the disappointment in not getting a new season of Stranger Things this summer, the new scripted Rebel Robin promises to be a perfect way to still enjoy some new Stranger Things adventures this summer albeit in a different format than we’ve become accustomed to.

While the series does not appear to be coming to Netflix directly, you can catch new episodes everywhere you get your podcasts making it easily accessible to enjoy from your favorite podcast service and devices!

As you might have already guessed, Rebel Robin: Surviving Hawkins will star Maya Hawke who will be reprising her role of Robin for the podcast series. In addition to Hawke, the podcast will also feature the voice of actor Sean Maher, whose exact role in the project is not yet clear.

Also unclear is whether any additional members of the Stranger Things cast might drop in for a surprise appearance, so be sure to stay tuned!

Before Robin returns in Stranger Things 4, fans will finally get the chance to learn more about the character via Rebel Robin: Surviving Hawkins. This prequel series will take fans on a journey back to Robin’s days at Hawkins High School and the monsters Robin faced off against long before meeting Steve and the gang.

It’s October, 1983. There’s a monster lurking in Hawkins, Indiana, chewing people up, spitting them out. And Robin Buckley knows exactly what this monster’s name is: Hawkins High School.

Curious to know what exactly you can expect from Netflix’s new Stranger Things scripted podcast series? Check out the trailer for Rebel Robin: Surviving Hawkins below! 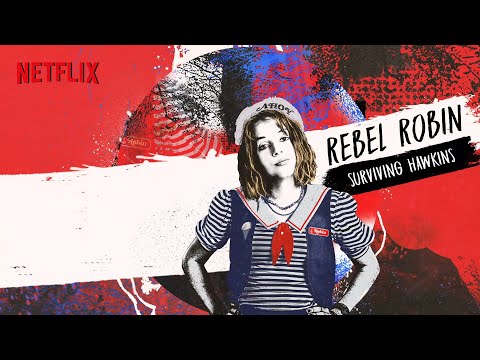 Be sure to catch the first episode of Rebel Robin: Surviving Hawkins when it releases Tuesday, June 29 and don’t forget to check back for more Stranger Things 4 news as it becomes available!

Previous articleNate Bjorkgren: Indiana Pacers fire head coach after one season in charge | NBA
Next articleNegotiations between Fatah and Hamas postponed due to refusal to make concessions