As expected the Jacksonville Jaguars made Trevor Lawrence the first overall pick in the 2021 NFL Draft which saw quarterbacks selected with the first three picks for the first time since 1999.

On the banks of Lake Erie in Cleveland, and squeezed between the Browns stadium and the Rock & Roll Hall of Fame it was the Chicago Bears and New England Patriots who made the surprising quarterback moves but only after Jacksonville made their Lawrence selection official.

The Jaguars owned the first overall pick for the first time in franchise history and despite Lawrence being the consensus No 1 pick they took almost all of their allotted 10 minutes to turn their card in before NFL Commissioner Roger Goodell announced what everyone had anticipated.

Lawrence will team up with new head coach Urban Meyer as the Jags aim to turn things around after last season’s 1-15 record and he is joined in Jacksonville by his Clemson teammate Travis Etienne who was the franchise’s second first round pick at 25.

“I couldn’t be more excited; I think it’s a great fit, we’re not even there yet, and we definitely feel the love and support,” he said.

“Really excited just to bring some energy to the city and do everything in my power to get us back to where we want to be. This is going to be a really fun year and just know that once I get there, all my focus, all my attention is to making us the best we can be.” 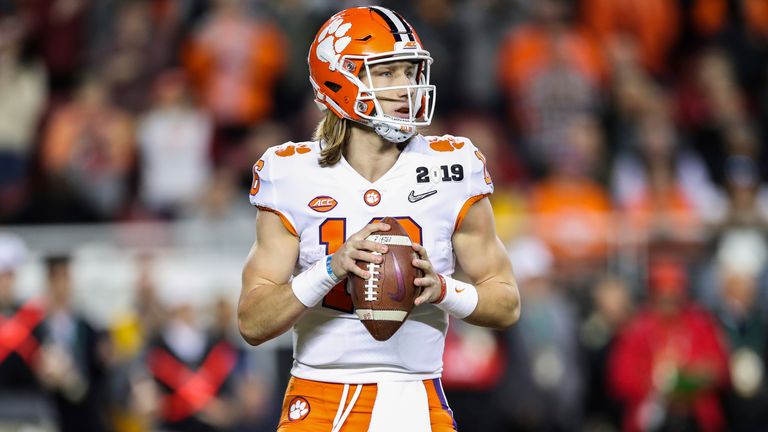 “Not all first overall picks are the same, if you are the Jaguars you are thankful you are picking number one because guys like Trevor Lawrence they don’t come along very often.

“I think the Jaguars are positioned with somebody like Trevor Lawrence, with his ability, the arm strength, the touch, the accuracy and the playmaking ability and fact he is a winner to get off an running pretty quick,”

Earlier this offseason the Jets traded Sam Darnold to the Panthers, three years on from Drafting him third overall, and one pick higher in the draft they made BYU’S Zach Wilson the second QB off the board.

It’s the first time in Draft history a team have taken quarterbacks in the top three three years apart, and Wilson vowed to make his mark for a success-starved franchise.

“I’m going to give everything I have, I’ve worked as hard as I can for this moment,” said Wilson who was in Cleveland.

“We’re going to be a special team, we’re going for a Super Bowl. Just like every situation that comes up in my life I’m going to give it everything I have.”

With the first two picks following most projections, the intrigue began when San Francisco were on the clock with the third pick and having stunned the NFL world with their trade up from 12 to 3 a month ago, they finally gave everyone an answer.

John Lynch and Kyle Shanahan had been tipped to select Mac Jones, but opted for North Dakota State’s inexperienced but hugely talented and athletic quarterback Trey Lance to make the 2021 Draft the first in more than 20 years that quarterbacks were selected with the first three picks.

Atlanta made Florida tight end Kyle Pitts the first non-QB off the board and with the fourth selection, the highest ever drafted player from his position group, before Ja’Marr Chase became the first wide receiver selected when Cincinnati reunited him with his former LSU quarterback Joe Burrow.

Miami added Alabama wide receiver Jaylen Waddle with the sixth selection before Detroit opted for Oregon’s offensive tackle Penei Sewell to set a record for the first time seven players from one side of the ball were selected with the first seven picks.

Cornerback Jaycee Horn (Carolina) and Patrick Surtain II (Denver) ended the run of offensive players before the first trade of the night saw Philadelphia give up a third round pick to trade with NFC East rivals Dallas and take Alabama’s Heisman Trophy-winning wide receiver DeVonta Smith with a selection that rounded out the top 10.

Heading into the Draft Justin Fields and Mac Jones were the other two quarterbacks expected to go in the first round, and despite falling down the board they both wound up in news-worthy homes.

Ohio State’s Fields was selected 11th by the Chicago Bears, who traded up from the 20th overall selection and gave up their first round pick in 2022 as part of the deal with the New York Giants. Fields will now compete with Andy Dalton who arrived at Soldier Field in free agency and was immediately tagged QB1 – he may now have a battle on his hands.

The most fascinating move might well have been New England’s selection of Jones with the 15th overall pick. The Patriots haven’t selected a first round quarterback since Drew Bledsoe was taken first overall in 1993 and they had been tipped to potentially trade up for one of this year’s prospects.

Instead Bill Belichick sat and waited as Jones, who won a national championship with Alabama this year, fell into his lap to accompany Cam Newton and Jarret Stidham in the quarterback room in Foxborough, much to the 22-year-old’s delight.

“This is what I wanted all along and I can’t wait to play for the greatest franchise in NFL history,” Jones said on stage in Cleveland.

“I’ve played under some legendary coaches and now I can’t wait to play for Bill Belichick.”

No messing from Jacksonville who wasted little time in confirming what everyone expected. Measuring in at 6ft 6in and weighing 220llbs the 21-year-old cites Peyton Manning and Drew Brees as his inspiration – the Jaguars will be delighted if he delivers anything close to the two legendary signal callers.

Three years on from selecting Sam Darnold as the quarterback of the future in the Big Apple, the Jets start again and make the 21-year-old Wilson the latest player to attempt to turn the franchise around.

Entered as one of the Draft’s biggest mysteries, but a mystery with enormous upside for the 49ers and Kyle Shanahan’s offense. Despite just 17 total starts at North Dakota State, Lance has showcased phenomenal athleticism, precision passing and natural playmaking ability, notably with room for growth.

The unicorn, the mismatch nightmare, the Draft’s best player? Kyle Pitts typifies the modern tight end in regards to that hybrid package he offers. Creates separation with receiver-like ease, has the size and brute power to be a dominant vertical and red zone threat, offers great hands and ball skills, works well on the outside, over the top and underneath.

Among those to opt out of the 2020 season due to COVID-19, but arguably showcased all you would need to know about him in an outstanding National Championship-winning 2020 season in which he made 84 catches for 1,780 yards and 20 touchdowns. He will do it all and joins Tee Higgins and Tyler Boyd in a fine receiver corps for last year’s first overall pick Joe Burrow.

Coverage of the NFL Draft continues on Sky Sports NFL on Friday and Saturday, with the second and third round picks taking place on Friday from midnight