Paras Chhabra and Mahira Sharma are one of the most loved couples from the Bigg Boss 13 house. Although these two have never accepted their relationship publicly, fans love their Jodi, and their bond is proof enough for them that they have something special. In fact, even these two have gone on records to state a lot of times that they are more than just friends.

While talking to Koimoi exclusively, Paras opened up about his current relationship status with Mahira and said that, “dilon mein official hai”. He left us and his fans in a spot where we have to read between the lines and understand what exactly is going on between them. Anyhow, we could not let the actor get rid of this so easily.

When we got a chance to interact with him, we played a game called ‘What If’ with him. We threw many situations in front of the former Bigg Boss 13 contestant where he had to answer how he would react in those particular situations? We asked him, “ What if you and Mahira Sharma are out on vacation and she proposes you for marriage?” The actor instantly replied, “ I would say yes!”

Well, this is what we expected! But later, we went on to ask him that if ever they were put in a situation like this, who would be the first one to propose? Paras Chhabra smiled and instantly replied, “I will do it.” He further opened up about what kinda proposal does Mahira Sharma expect.

Paras revealed that Mahira wants her dream man to come in a nice car wearing a Black or white shirt. Then he should take her hand and make her sit in the car. After reaching the venue, the guy should again take her hands and help her get down from the car and get down on his knees, propose to her along with a bouquet. Also, the actor revealed that Sharma wants a beach venue for this special occasion.

Paras Chhabra concluded, “usko full filmy date chahiye to main wo karunga agar karunga to.” We must say Mahira Sharma is a lucky girl indeed! So guys! Be prepared for such a lavish proposal coz if you believe that these two are dating, then this proposal is not far away.

Watch the entire video below: 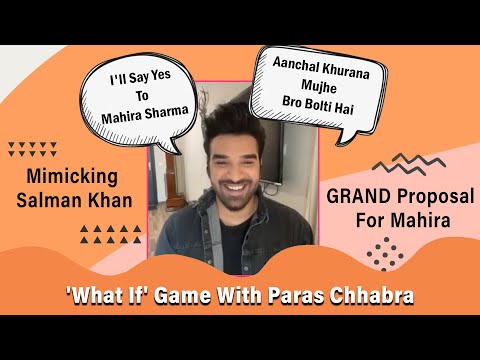 . Badshah Wrote The Lyrics Of Paani Paani On His Flight With Aastha Gill