Fans are always crazy about their favourite stars. On several occasions, we have heard many actors sharing their unforgettable fan interactions in the past. But did you know Paras Chhabra had a crazy girl-fan who literally jumped for him from the first floor? Yes, we know it is quite shocking to hear. In fact, even the actor still considers it as the craziest interaction he has ever had with a fan.

Chhabra rose to fame after his stint in Bigg Boss 13 and became a household name. He enjoys a massive fan following, and fans love this man! Be it music videos, his style or his pictures, these people shower love on the actor in abundance and Paras is really thankful to all his fans for loving him to the fullest.

Recently Koimoi got a chance to interact with Paras Chhabra after he achieved a big milestone on social media. So, his hashtag crossed a million tags on Instagram, and this definitely is a big deal. The Bogg Boss 13 contestant was genuinely on cloud nine and could not thank his fans enough for so much love.

Well, when we asked him about one of his craziest fan interaction, his expression changed, and he still seemed to be in disbelief of the incident that he narrated. We are sure you would be shocked to hear it as well.

Paras revealed, “After doing Splitsvilla 8, I was in Delhi for Roadies audition. There, a girl jumped from the first floor after looking at me. Wo bahut badi fan thi aur use photo khichani thi and mujhe lag raha tha ki kahi use chot lag jaati to, kahi kuch ho jata to? Matlab tum first-floor se jump kar gaye, itna kya tum me roadies wala power aa gaya hai? She jumped and came for a picture thodi ladkhadati hui, and then it was all good. So I can never forget that ki ek ladki jump kar gayi.”

Indeed, this incident is unforgettable and shocking at the same time. We cannot imagine how that girl gathered the courage to jump from the first floor. But, this is proof of how much fans love Paras Chhabra, and they can do anything for him.

Watch this entire interaction in the video below: 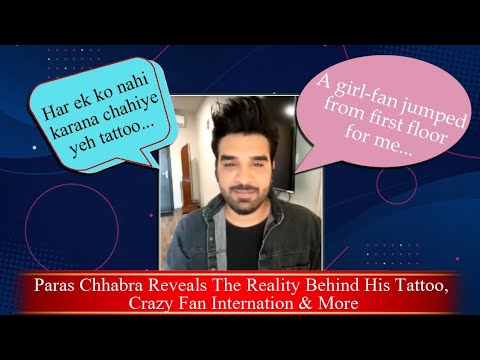 Ratings: The Blacklist Goes Low With Finale, In the Dark Returns Steady