After delivering some power-packed performances this year, Parineeti Chopra is on cloud nine. She is receiving good reviews for her versatile acts in three back to back films— ‘Sandeep Aur Pinky Faraar’, ‘The Girl On The Train’, and ‘Saina’.

She is among the stars who never fails to leave her fans inspired. With her stellar on screen performances, Parineeti has clearly made a place for herself in people’s hearts. One of the most sought actresses in Bollywood right now, Parineeti is also an avid social media user.

The ‘Ishaqzaade’ actress who is currently enjoying her time in Turkey, on Wednesday took to her Instagram handle and held an ‘Ask Me Anything’ (AMA) session with her massive fan army.

One user asked her to reveal one secret about her co-star Arjun Kapoor. Responding to the question, Parineeti replied, “Bahar se brute, andar se softy”. One user also complimented her performance in ‘Sandeep Aur Pinky Faraar’. Parineeti replied to it saying, “2021 will remain a special year for me. Its the year I released 3 films within a single month, all 3 gave me back all the love and critics review. Cannot be more grateful”.

One fan asked how does she spends her free time? To which the diva replied with a clip of herself swimming in a pool. Another question read, “What’s the one thing you religiously do when you wake up”, and Parineeti said, “Check my phone”.

One fan also asked that ‘Are you vaccinated?’. Parineeti said, “Its the first thing I will do when I come to India”.

Another user asked “How the way you are only selecting good scripts now?” Parineeti said, “I want to only do good work in which I can showcase my talent. For you, for myself. The critics and audiences have lot of expectations from me, for which I am grateful. Wanna do my best. Success doesn’t come easy. Wanna hold onto it”. 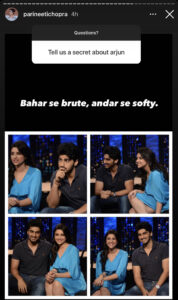 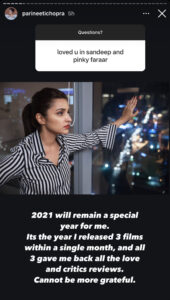 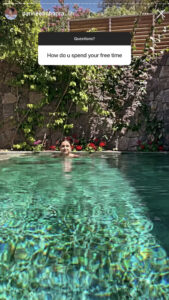 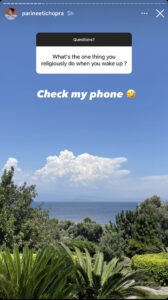 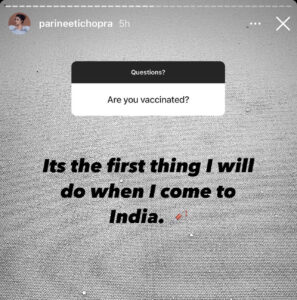 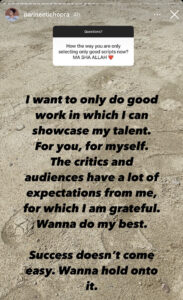 On the work front, Parineeti will next star opposite Ranbir Kapoor in Sandeep Vanga’s crime drama film titled ‘Animal’.

Previous articleMajor fires in evacuated near Jerusalem and several villages
Next article‘Broken But Beautiful 3’: Sidharth Shukla feels ‘blessed’ as show is ‘genuinely loved’ by the audiences