Sony will be making its PS Plus October reveal very soon, and PlayStation Plus subscribers think they know about one free game that will be included.

It should be noted that this news has not been confirmed by the tech giant yet and remains a prediction based on a few details picked up.

Nonetheless, gamers have made an intriguing argument suggesting that Hell Let Loose will be included in the PS Plus October 2021 lineup, although it won’t be available for those on PS4.

The first is that Hell Let Loose will be released on October 5, 2021, on PS5 consoles. What makes that notable is that it is also when the new PlayStation Plus games will be launched for gamers to download.

It might just be a coincidence that doesn’t add up to much more than that, but there’s a few other pointers.

Another thing pointed by fans is that Hell Let Loose can be pre-ordered on Xbox Series X but doesn’t appear to be available for PlayStation 5 users.

Why would any company do such a thing unless something big was being planned for its game on a particular platform?

Again, this could be related to something else, but as Sony would be missing out on cash on the PlayStation Store, it would make sense that they would do this to avoid having to release refunds later on.

The other thing noted by gamers is that Hell Let Loose can be played on PS5 right now as part of an open beta that can’t be found on other console platforms. 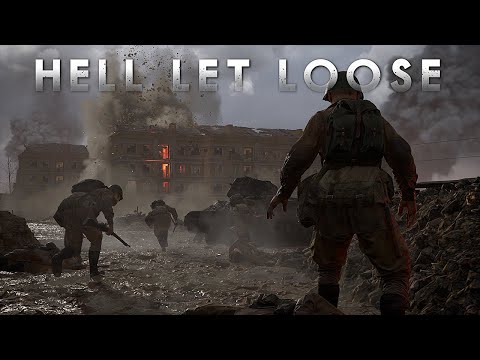 A message describing the game and the Hell Let Loose open beta reads: “Deploying October 5 onto PlayStation 5, Hell Let Loose is an immersive online 50 vs. 50 multiplayer strategic shooter set across 10 highly detailed and accurate maps from World War II’s Western Front, one of which takes place among the trees and mountainous plain of Hürtgen.

“In the autumn of 1944, months after the Normandy Landings, the forests of Hürtgen saw the United States engage with German forces as part of a strategy to secure Germany’s industrial heartlands. The battle was not only the longest fought on Germany soil during World War II, but it also continues to be the longest single battle ever fought by the U.S. Army.

“Between September 16 and 20, the Battle of Hürtgen Forest will be fought during Hell Let Loose’s open beta, exclusively on PlayStation 5. Available to all players, this limited time beta is a taste of what can be expected in the full game.

“One of the two modes launching next month – Warfare – is playable during the beta, and sees each side begin the battle occupying half of the map.

“From there, they’ll have to push the opposition back and secure enemy territory for themselves until they reach their base or hold the most ground until the timer runs out.

“As the two sides of 50 players (each broken down further into squads of six and led by an overarching strategic Commander) fight across trenches, bunkers, and foxholes for every inch of territory, communication will be key to securing the advantage and, ultimately, victory.”

Will this add up to Hell Let Loose being released as a PS Plus free game? Subscribers will have to wait until September 29 to find out.

Another report has suggested that Alan Wake Remastered could be made available on PS4 due to it also being released on October 5.

Destiny 2 Xur location: Where is Xur this week and what is he selling today?