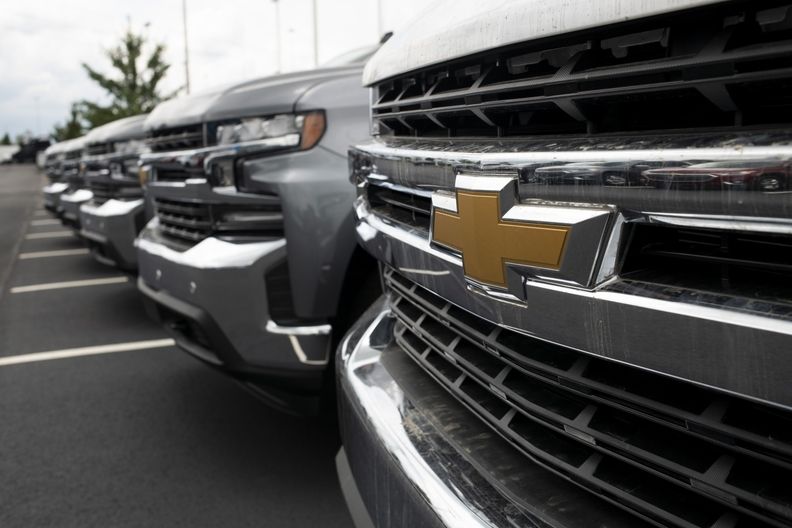 BLOOMBERG
New-vehicle inventory levels early this month declined more than 20 percent from a year earlier, and days’ supply of the fastest-turning models, such as pickups, began to fall in early March after automakers temporarily mitigated the effect of tight microchip supplies.

The supply challenges — a global microchip shortage, U.S. port congestion, a massive container ship stuck in the Suez Canal and more — plagued the industry as automakers continued to cope with tight stock levels because of the coronavirus pandemic. Despite the headwinds, analysts expect first-quarter light-vehicle sales to rise about 9 percent from a year ago.

Most automakers are scheduled to report their first-quarter U.S. sales Thursday.

“First-quarter sales are starting off on a strong note,” Jessica Caldwell, Edmunds’ executive director of insights, said in a statement. “The fact that we’re surpassing last year’s numbers when the pandemic didn’t even hit the industry until the last two weeks of March 2020 is no small feat.”

Cox projects sales of about 3.8 million vehicles for the first three months of 2021, up about 9 percent from a year earlier but down 4.9 percent from the first quarter of 2019 because of lower fleet volume. The year-earlier figures reflect a large drop in the second half of March, after the pandemic began.

On a retail basis, new-vehicle sales are expected to jump 21 percent to 3.2 million — the second-highest first-quarter volume ever, according to J.D. Power and LMC Automotive. It would be 4.7 percent more than the first quarter of 2019.

“There is no question that sales of specific models in specific geographies are being disrupted by low inventories, but consumers are nevertheless demonstrating their willingness to buy despite having fewer vehicles to choose from in retailer inventory,” Thomas King, president of the data and analytics division at J.D. Power, said in a statement.

The average new-vehicle transaction price will reach $37,314 for the quarter, a first-quarter record, according to the J.D. Power and LMC forecast. That would represent a nearly $4,000 increase from the first quarter of 2019.

Rising prices will lead to record profit for dealers, the forecasters said, with average gross profit per vehicle nearly tripling from the same period last year to $2,225. Average profit per vehicle has topped $2,000 for seven of the last eight months.

Cox expects nearly all U.S. automakers to report year-over-year increases for the first quarter, with Subaru, BMW, Volkswagen, Mazda, Volvo, Toyota and Hyundai posting double-digit gains. It projected increases of about 5 percent for Stellantis and General Motors and a 2.9 percent decline for Ford Motor Co.

Inventory levels declined more than 20 percent from a year earlier, with supplies of pickups and other fast-turning vehicles starting to fall in early March after automakers temporarily mitigated the effect of the chip shortage on those models, Cox said.

“It may be too soon to declare tight supply a new normal, but it’s certainly a new normal for now and … for the remainder of the year,” Charlie Chesbrough, senior economist at Cox, said during a media briefing Monday.

“Some consumers seem to be catching on to the microchip shortage and are responding by making more aggressive purchasing decisions,” said Caldwell. “Shoppers with their heart set on a high-demand truck or SUV need to do a bit of extra research and be prepared to pull the trigger on their car purchase as soon as they can find inventory, because those vehicles are flying off the lots.”

The chip shortage has had a minimal effect on sales in the first quarter; customers were willing to buy the vehicles dealers had in stock, Chesbrough said. But the issue could hurt sales in the second quarter.

“We do think that the inventory issue will become a thorn in the side of the industry,” he said.

Fleet sales are expected to fall to 180,200 in March, according to J.D. Power and LMC. That’s one-third lower than a year ago and less than half the volume of March 2019.

Cox said its 2021 sales forecast of 16.1 million vehicles is conservative because of uncertain fleet volume.

“What [fleet] demand will be is really just a giant question mark for the whole year,” Chesbrough said. “I think there is certainly upside potential to our forecast.”