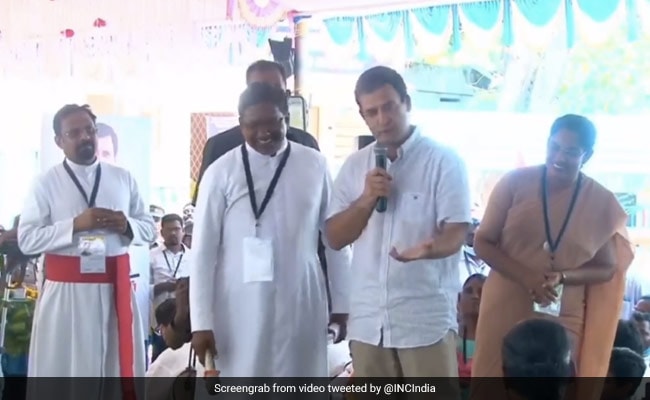 The BJP in Tamil Nadu has accused Congress MP Rahul Gandhi of violating the Model Code of Conduct ahead of next month’s Assembly election – by holding a “surrogate election campaign” during an interaction with school students from Kanyakumari district earlier this week.

The chief of the party’s state unit, L Murugan, wrote to the Chief Electoral Officer, alleging “the political campaign in educational institutions has violated provisions of (the) Model Code of Conduct” and calling for “strict action, including prohibitory orders” against Mr Gandhi.

“During his visit he is seen saying: ‘What India now is going to need is another freedom struggle’ and ‘There is a lot of anger that’s being spread in the country, lot of fear in the country, and that is what we have to fight. We have to fight the division, the anger and the fear and once again make India happy, comfortable, fearless and united’,” Mr Murugan wrote.

He said two sections of the Indian Penal Code, including one related to sedition, had been violated.

The Congress has yet to formally respond. However, local functionaries deny any violation. One leader said: “It is an indication of Rahul’s connect with the masses and the BJP is scared”.

Mr Gandhi has made multiple visits to the southern state – where the Congress has allied with the Leader of the Opposition MK Stalin and his DMK – ahead of the April 6 election.

The visit that prompted the complaint from the BJP – which is allied with the ruling AIADMK – was to St Joseph’s Matric Higher Secondary School in Kanyakumari’s Mulagumoodu town.

Mr Gandhi discussed several issues with the students, including the NEET (National Entrance & Eligibility Test) issue, the controversial new National Education Policy (NEP) and the importance of considering both teachers and students when shaping policies for schools and colleges.

“If I force you to read, then it is arrogance, but if I ask what do you require, then it is humility. Arrogance creates problems whereas humility resolves problems,” Mr Gandhi told students.

The former Congress chief also drew loud cheers after taking up a “push-up challenge” from a student. A video of the student and he doing one push-up after the other was widely shared online.

Tamil Nadu votes for a new 234-member Assembly on April 6. Results will be declared on May 2.

The AIADMK-BJP alliance is looking to put a disastrous Lok Sabha poll showing (the pair won just one seat between them, while the DMK-Congress won 38) and secure a third consecutive term.

This will be the first election since the death of former Chief Ministers M Karunanidhi (DMK) and J Jayalalitha (AIADMK) – two of the tallest figures in Tamil Nadu politics.

With input from ANI