Bollywood’s one of the most-sought after actress Anushka Sharma is celebrating her 33rd birthday on Saturday, and heartwarming wishes have been pouring in on the social media for the newest mommy in the town.

Anushka Sharma and her husband Virat Kohli never fail to make an impression. They are one of the most adorable couples of Bollywood and the cricket world, who always make heads turn with their romantic pictures.

Now on the occasion of her birthday, Rakul Preet Singh shared a stunning picture of Anushka on her Instagram story and penned a sweet note for her. Rakul Preet wrote, “Happppppy Bdayyyy my fav Anushka Sharma. Love, light and happiness always”. 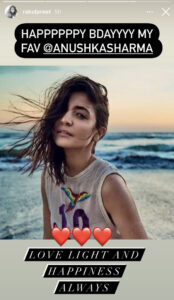 Born on May 1, 1988 in Ayodhya, Uttar Pradesh, to Colonel Ajay Kumar Sharma and Ashima Sharma, Anushka had her first modelling assignment for the fashion designer Wendell Rodricks in 2007, and later moved to Mumbai to pursue a full-time career as a model.