Reversing course on remote delivery pays off for Vermont dealership 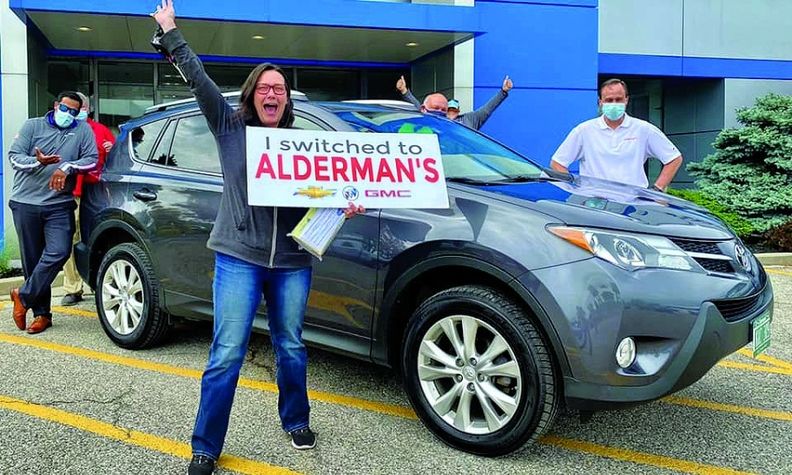 Tamia Fleming celebrates her 2015 Toyota RAV4 Limited with a sign the dealership made for photos.

Aiming to capitalize on the growing trend of offering remote services, Alderman’s Chevrolet-Buick-GMC in Rutland, Vt., in 2011 began delivering newly sold vehicles across New England free of charge. Similar practices were enabled in the service department, where some employees were engaged full time in picking up and returning customer vehicles in need of repair and maintenance.

The goal was convenience and customer satisfaction. Up to 30 percent of the 1,100 new and used vehicles the dealership sells annually were delivered across state lines.

But Mark Alderman, the store’s general manager, noticed a trend. Most of the dealership’s hottest vehicles were shipped out of market, and those customers wouldn’t return for their next purchase or even for service work.

“What we were doing was really spreading ourselves thin, not executing as well and raising expenses,” Alderman said.

Another casualty of free delivery was finance and insurance revenue. Offering ancillary products over the phone, or making last-minute pitches in customers’ driveways while they signed contracts, didn’t do the job, Alderman said. In fact, after interacting with the store’s least-trained employees and never stepping foot in the dealership’s expensive facility, customers had fewer qualms about taking their business to a competing store, he said.

In December 2014, the dealership’s loyalty retention rate — the percentage of new-vehicle customers who returned for their next purchase — reached a low of 42 percent.

“We were doing it because we wanted to sell more cars,” Alderman said. “When we looked back on it, there were a lot of benefits to the dealership and the customer experience that get lost when you ship a car.”

So Alderman decided his employees would stay put — and so would the dealership’s inventory.

At the end of 2018, Alderman’s Chevrolet-Buick-GMC instituted a new policy: All deliveries would move in-house, and service customers would drop off and retrieve their vehicles in the service lane.

Taking inspiration from a General Motors advertisement, Alderman had signs made up for customers to hold while standing next to their newly purchased vehicles with slogans such as, “We switched to Alderman’s” and “We stayed with Alderman’s.” Employees would take photos of the customers and tag them in posts on the dealership’s Facebook page.

The result? Higher loyalty rates and lower costs. Alderman said he doesn’t regret the change, even when the pandemic forced dealerships to close in spring 2020 and sent customers online seeking dwindling inventory.

The inside of Alderman’s Chevrolet-Buick-GMC closed for two months, and customers took delivery in the store’s parking lot during April and May last year. The dealership, which uses Darwin Automotive software for digital retailing, was able to have most vehicle purchase paperwork completed online ahead of delivery.

The dealership is actually recording its highest-ever loyalty levels during the pandemic, Alderman said.

In 2020, 62 percent of the store’s new-vehicle sales came from returning customers. In the last three months of the year, that figure reached 69 percent.

Alderman said he is sure he would have sold down more of his inventory sooner if the dealership were still delivering out of state, particularly as microchip-related production constraints reduced vehicle inventory this spring. But he says keeping car sales and service local is helping employees focus on how they can deliver better customer service to the immediate market.

Other dealerships “are afraid of the customer walking away,” Alderman said. “We just made a deep commitment to not try to be everything to everybody, of trying to be just really excellent in our space.”