This year’s British Academy Television Awards went down swimmingly as people gathered at the Royal Albert Hall to celebrate a night of TV… and socialising with one another in close proximity again. For Davina McCall, 53, and her team behind Long Lost Family, it was a night of true success as they won the Features category but the presenter’s heartfelt speech was abruptly cut short due to technical issues.

And they’ve stuck with the same sound recordist from the beginning!

The fitness guru was thrilled to win an award for the highly-emotional ITV series – which reunites individuals with their long-lost relatives – where she and the rest of the team appeared via Zoom to accept and give a speech.

But mid-way through their address, a technical error saw the video and sound cut-off completely, leaving viewers wondering what was going on.

It was all down to host Richard Ayoade to save the day with a joke.

He quickly mocked: “And they’ve stuck with the same sound recordist from the beginning.” 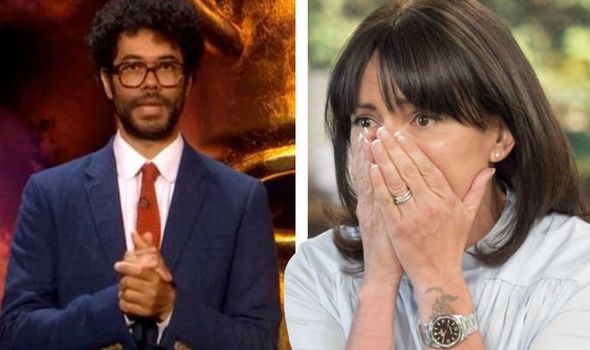 Richard Ayoade attempts to save the day as Davina McCall’s heartfelt speech is cut off (Image: BBC•ITV) 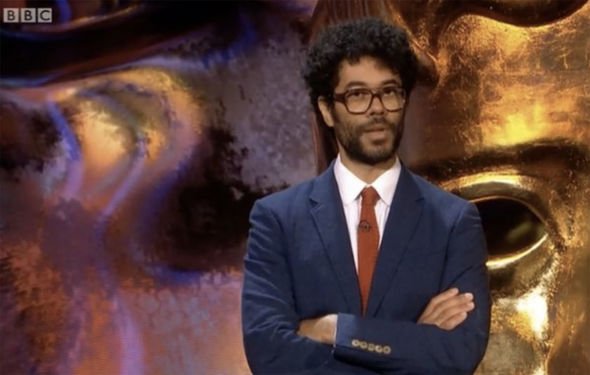 Richard had to save the day with a joke (Image: BBC)

The audience erupted with laughter, seemingly forgetting the blunder and the show resumed as normal.

Long Lost Family: Born Without Trace was up against BBC’s The Repair Shop, Big Zuu’s Big Eats and BBC Two’s Mortimer and Whitehouse: Gone Fishing – but the ITV show took the title this year.

After the programme’s big win, Kirstie Allsopp took to Twitter to congratulate the show for their win, but admitted she was “bitter” to not be nominated. 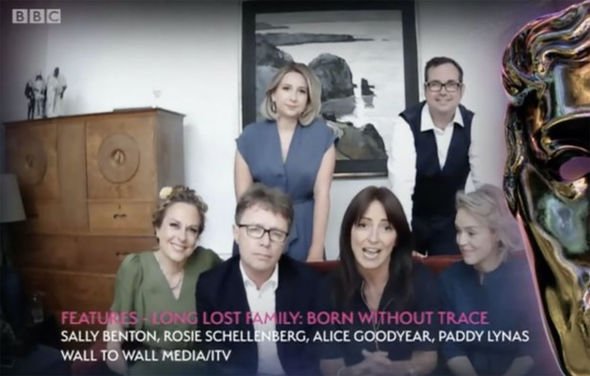 Davina and the Long Lost Family team were over the moon to win (Image: BBC) 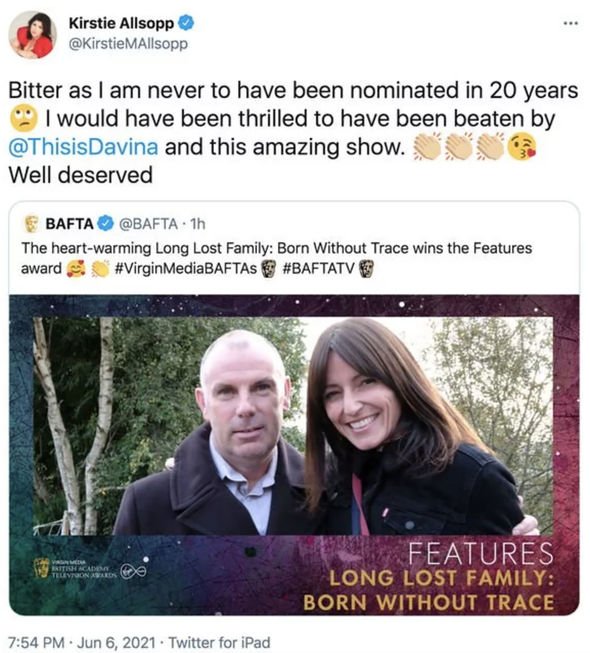 Kirstie was ‘bitter’ to not be nominated for a BAFTA (Image: TWITTER)

“I would have been thrilled to have been beaten by @ThisisDavina and this amazing show. Well deserved.”

“Some episodes of LLL are pure gold. You and that bloke deserve an award,” a second added.

A third added: “One of my best programmes.”

Kirstie has been fronting Location, Location Location alongside Phil Spencer for over 20 years.

The duo show house hunters some properties for sale that fit their requirements.

The presenter reflected on her 20 years on the show in an interview with her co-star last year.

She told The Guardian: “My biggest mistake was wearing my own clothes.

“I had a red leather coat with a huge zip, but this meant I got recognised more than I’d like. When we started, it was a more innocent time.

“I don’t think I could have made the series if social media had been around then.”

On why she believes the Channel 4 show has been a success, she added: “What we’re telling is the story of people’s hopes and dreams.

“That’s why the programme has endured.”

Previous articleSudan: We are ready to negotiate peacefully on the Renaissance Dam
Next articleUS Women’s Open; Yuka Saso claims historic win after Lexi Thompson buckles on