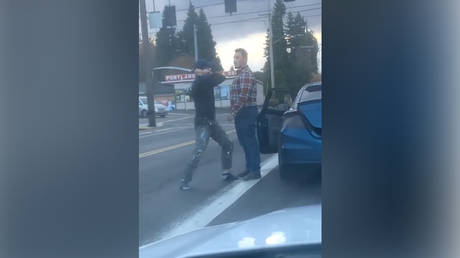 Road rage could be common, but two men in Portland, Oregon took it is at the extreme in a viral video posted on Twitter, with both brandishing deadly weapons in an attempt to intimidate each other.

Two motorists were filmed in I arrive face-to-face in a heated stand-off last week. In the movie, one the man can be seen drawing a sword from Samurai and threatening the other driver, who he replies pulling a rifle out of the trunk.

Like the video begins, withdrawal truck driver can be seen threatening another motorist with the coiled Samurai sword back behind his shoulder, as the target of his fury remains cold, just flinching. The paint splattered swordsman comes back off, before jumping back towards its intended victim with the blade once again held in tall.

Realizing that his fellow motorist won’t be intimidated by you, he returns to his rather battered Ford Ranger as the man filming the crash screams. “Beat his ass… he fucked you up Between.”

At that point the camera returns to the previously disarmed driver, who opens his boot and retrieves a rifle. The man who films the fight, who remained seated in his vehicle, drop his equipment and apparently driving off in fear.

Lt. Nathan Sheppard told Fox News that police don’t have the manpower to investigate each crime, adding that none of the people involved had reported criminal activities.