‘Saying goodbyes on certain film sets are difficult’, pens Yami Gautam as she wraps up ‘Dasvi’ Yami Gautam has been one of the most credible and sought after actress in the Bollywood who has proved her mettle in the industry. She has won hearts with her versatility, stunning looks and impeccable acting prowess.

The diva made an impressive debut with the film ‘Vicky Donor’ and since then she has been unstoppable with her on-screen presence. Besides her acting skills, the ‘Bala’ star also enjoys a huge fan base on social media and keeps her fans updated about her daily life.

From dropping her candid shots to treating us with her amazing selfies, the talented actor lights up the internet with her alluring pictures. The diva is also known for her amazing fashion sense and unique style statements.

The ‘Kaabil’ actress who had been recently shooting for the forthcoming project ‘Dasvi’ in Agra, on Monday announced the wrap of her schedule. Last month, Yami had shared the first glimpse of herself from the movie, wherein we saw her donning the hat of a Police officer named ‘Jyoti Deswal’. Yami is playing the role of an IPS officer in ‘Dasvi’.

Taking to her Instagram handle, Yami shared a video, where we can see her entering into her vanity van all smiles and excited, and doing a happy dance. She can be heard saying that she can’t believe she has finished another film in the pandemic. She further said, “I am so nervous… but I am soooo happy”.

Yami is looking beautiful in a blue kurta and denims. She captioned the video as, “Annnnnd it’s a wrap on ‘Dasvi’ for me !Saying goodbyes on certain film sets are difficult because of the amazing & memorable teamwork you’ve had ! Thank you so much #TeamDASVI for this unforgettable experience & getting #JyotiDeswal really close to my heart”.

The ‘Kaabil’ actress also shared another video, wherein we see her sitting with her co-star Abhishek Bachchan and the team is seen cheering for her. We also spot a cake in the snippet. Yami thanked the team of the movie and said, “Thank you for making such a fun and amazing team! Thank you for making #JyotiDeswal come alive with your work! This dance was for you guys”.

Yami also shared a BTS still with the director Tushar Jalota and thanked him. “Thank you Tushar, for trusting me with ‘Jyoti Deswal’! Have never played a character like that before ! First film is always special and wishing you all the amazing success that you deserve! Shooting for ‘Dasvi’ shall remain one of my most special experiences,” Yami wrote.

Yami’s post was liked by Varun Dhawan, and Nimrat Kaur commented, “woooooohoooooo!!!!!!!! #JDInTheHouse”. Yami replied to her co-actor Nimrat and said, “all eyes on you Bimmo Go KILLLLLL ITTTTT”. 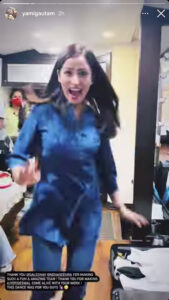 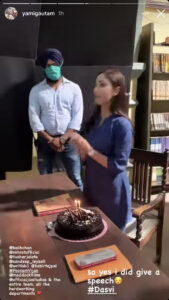 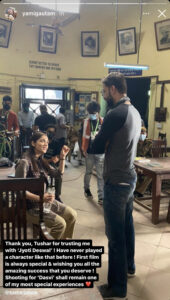 On the work front, Yami was last seen opposite Vikrant Massey in ‘Ginny Weds Sunny’. She will be seen in ‘Bhoot Police’ which also stars Arjun Kapoor, Saif Ali Khan, and Jacqueline Fernandez. Directed by Pavan Kirpalani, the flick is produced by Ramesh Taurani and Akshai Puri.