Schmigadoon!’s Ann Harada Discusses Florence’s Devotion to the Mayor: ‘There Are Different Kinds of Love’ 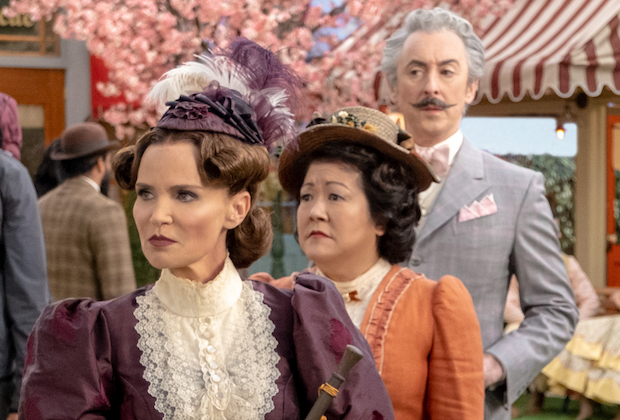 In Schmigadoon!, Mayor Menlove’s doting wife Florence is a woman of very few words — but that didn’t make the role any less desirable for Broadway veteran Ann Harada.

“I thought she was hysterical,” the Avenue Q alum tells TVLine. “It’s one of those characters [where] the dialogue is normal, but you know she’s not. There’s something inside of her, and that’s the most interesting [type of] character to play.”

When Florence finally gets the chance to use her voice in Episode 3, her words — or more specifically, her lyrics — speak volumes. During “He’s a Queer One, That Man O’ Mine,” Florence sings to Cecily Strong’s Melissa about her relationship with Aloysius, whose homosexuality is obvious to everyone but her. 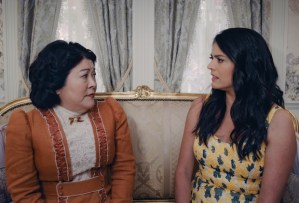 “[Executive producer Cinco Paul] did a great job of writing songs that remind you of other songs without being those other songs,” Harada says. “So, I found a couple of songs that I thought were very reminiscent of my song: ‘What’s the Use of Wond’rin” from Carousel and ‘Bill’ from Showboat. They’re both songs about loving somebody no matter what.”

And that theme spoke to Harada, whose character remains faithful to her closeted husband despite their apparent disconnect.

“I’m very much in love with him, and I believe that he still loves me very much,” she says. “But, you know, there are different kinds of love. And the profound devotion she has for him has never wavered.

“I believe that he was the first man that ever made her feel special and feel different, so her connection to him has always been there,” Harada continues. “It’s not like she made it up.” With that said, “I think there are things that she notices about him, obviously. But they don’t get in the way of [their relationship]. Everybody has their ‘quirks,’ their ‘little things’… and to her, these are his ‘little things,’ you know? He takes a lot of walks, and she’s very accepting of that. She just adores him, and she thinks that he is the greatest man in the world.”

But would Florence continue to stand by her man if he let her in on his long-kept secret? “Oh, I think she would because she gets enough out of that relationship,” Harada answers. “Is it completely fulfilling? Maybe not. But is it enough? For her it is.

“If you have found somebody who values you and treats you well, and understands you and tries to please you, that’s something,” she says. “Maybe Florence has never really thought about what she wants, but she’s not unhappy with what she has.”

Previous article'Really hurts' GMB’s Ben Shephard winces through pain of rehab as he shares surgery update
Next articleSuper users of gasoline: only 10% of WE drivers almost a third burns of the gas