TV actors Shaheer Sheikh and Hina Khan’s much-awaited music video Baarish Ban Jaana is finally released and fans are over the moon now. Hours after the release of the music video, it has amassed more than 1 million views.

The music video of the song showcases a celebrity couple going through a breakup but come back together for a work project in the picturesque Kashmir Valley. The romantic number is sung by Stebin Ben and Payal Dev.

While Shaheer Sheikh and Hina Khan new music video is breaking the internet with their adorable chemistry, the team of Baarish Ban Jaana came together for a conversation. At one point during the conversation, the team engaged in banter as Hina jokingly expressed her wish that she would plan the next music video in Ladakh with Pooja Gujral (Director) and not with Shaheer. 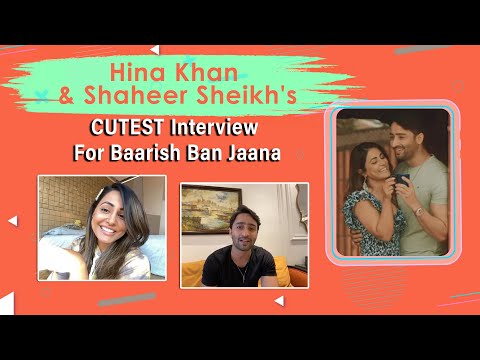 Earlier, Hina and Shaheer Shaikh teased followers about their music video through their respective social media handles. They shared the amazing behind the scenes videos from ‘Baarish Ban Jaana’. The BTS video gave all the fans a sneak peek of the camaraderie that the actors share.

Last week, Hina Khan and Yeh Rishte Hain Pyar Ke actor shared the first look poster and announced the release date of the music video. Back in April, the actress even shared several pictures of herself and Shaheer Sheikh from Kashmir and dropped a hint about an upcoming project.

Sharing the picture, Hina wrote, “What’s the surprise, Shaheer Sheikh.” Take a look at the picture below:

Apart from Baarish Ban Jaana, the Naagin 5 actress had also appeared in a couple more music videos like Patthar Wargi and Bedard recently. On the other hand, Shaheer Shaikh is a popular face on TV. He has appeared in TV soaps like Navya, Mahabharat and Kuch Rang Pyaar Ke Aise Bhi.

. Amber Heard To Jump From DC To Marvel As She’s Being ‘Seriously Considered’ For Its Next Mega Project?