She looked delighted to be done up to the nines in 1940s style to rehearse with Sir Tom in Haworth, near Bradford. Sheridan, 39 – her hair set in rollers – wore a box pleat skirt with a nipped-in velvet jacket. Dapper Doctor Zhivago actor Sir Tom, 84, carried off a three piece suit with a burgundy tie, brown shoes and a pocket watch.

Sheridan will play a school mistress in The Railway Children Return.

Jenny Agutter, 68, who was child star Bobbie Waterbury in the original 1970 movie, is reprising her role.

The Call The Midwife actress was not on set yesterday. But there was a soldier in full costume and several classic cars that had been transformed into old police vehicles.

The new film is returning to the locations of the original – including Haworth, Oakworth Station and The Bronte Parsonage. 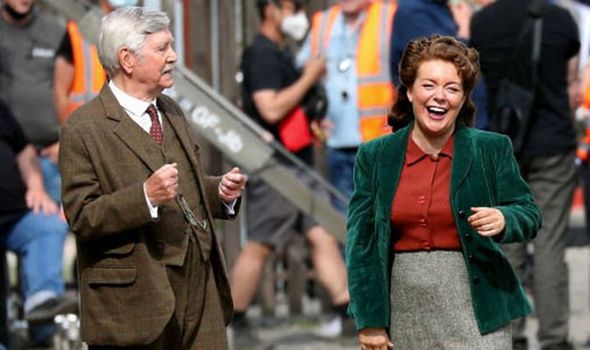 The Keighley and Worth Valley Railway from the first movie film will also feature.

The Railway Children, so beloved by generations of children, was based on E Nesbit’s novel.

It tells the story of the Waterbury children – Bobbie, Phyllis and Peter – whose quiet, country world is rocked when their father is sent away.

Director Morgan Matthews, who won a Bafta for war documentary The Fallen, started filming last month with the sequel due to reach cinemas next April.

Previous articleUnited States Must Work With Allies To Secure Electric Vehicle Metals: White House
Next articleAamir Khan’s Innocent Love For Sridevi Was So Evident That It Took Just Two Seconds For The Evergreen Actress To Know That