Crossing yet another milestone to be proud of, Sidharth Shukla has once again taken over social media by storm after surpassing three million hashtags on Instagram, the most for any Indian TV celebrity yet.

Sidharth is currently one of the most influential and talked about personalities on and off social media, and any trend started by him turns into a rage and is strongly followed by his mega fanbase.

Not only is Sidharth’s fan following limited to the country, but people world over are talking about Sidharth Shukla and his achievements, which has resulted in him becoming one of the most prominent celebrity faces at the moment. 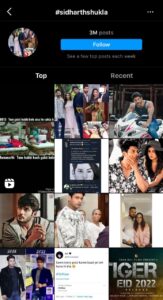 Having completely taken over Instagram and other social media platforms with his presence, Sidharth’s name is buzzing on these mediums at all times, which has successfully led to him achieving the three million hashtag mark!