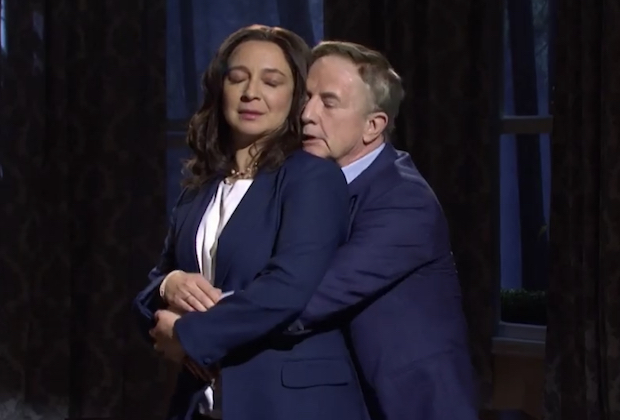 Did someone call for a Maya & Marty reunion?

Saturday Night Live enlisted Martin Short to play Second Gentleman Doug Emhoff. Maya Rudolph’s onetime variety show cohost made his debut this weekend during Vice President Kamala Harris’ Passover seder, which she held in a failed attempt to unify politicians on both sides of the aisle, including Ted “Started at the Bottom, Now I’m Here” Cruz.

Before their guests arrived, Harris encouraged her shy, “Semitic smoke show” of a husband to loosen up and “pretend it’s just us.” That’s when the lights dimmed and the sketch took a surprisingly sexy turn.

“Listen to me, girl,” Short’s Emhoff said, wrapping his arms around his beloved wife. “I support you. Every time you look around, Dougie is so going to be there for you, honey… But from time to time, you’re going to look around and I am not going to be there. But that’s just me telling you, ‘You got this, baby!’”

“You’re my low-bearing wall,” Harris responded. “You hold up my roof. And you’re always on top of my basement.”

Eventually, Alex Moffat’s Joe Biden arrived, fresh off his first press conference as president of the United States. After he put Harris in charge of the crisis at the U.S.-Mexico border, he opened the front door to reveal a Passover surprise: his beloved dog Major. Before long, the unruly German Shepard attacked Emhoff, who was only able to break free once Rep. Marjorie Taylor Greene showed up, “insurrection-style,” and scared Major away.

Press PLAY on the video below to watch an excerpt from the Passover-themed skit, then hit the comments with your thoughts on Short’s casting.

Avneet Kaur Once Opened Up On Link-Up Rumours With Siddharth Nigam: “People Saw Us As Shah Rukh Khan & Kajol…”

Abhinandan Jindal Drops His Surname: “My Mom Introduced Me To That Person Who Made Me Remove My Last Name”

Previous articleDillian Whyte against Deontay Wilder is a ‘colossal fight’ that could fill a
Next articleLike others struggle overseas, India can alter this pattern: Ian Chappell